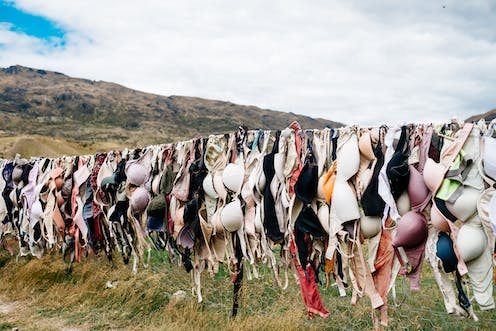 Different people have very different chances of being diagnosed with breast cancer.Pablo Heimplatz/Unsplash

Breast cancer is the most common cancer in women worldwide and the second-most-common cause of death from cancer. Although the chances of curing breast cancer have risen recently, efforts to prevent occurrence in the first place have been less successful. Around one in eight women in Australia are expected to be diagnosed before the age of 85.

Despite the disease being common, different people have very different chances of being diagnosed with breast cancer. Working out this chance for each person guides who will benefit most from ways to reduce risk. These can involve changes in diet and exercise, preventive medications, or even surgery in high-risk cases.

We’re aware of many things about a person’s lifestyle or genes that increase the chances of getting breast cancer, but we don’t always understand how these might cause the disease. This is partly because much of our research is based on “association studies”.

Here, a researcher notices something more common in people with the illness and compares people with and without the illness to confirm this link. While this provides us with an association between the common element and breast cancer, it does not prove that thing directly caused the illness.

Also, for breast cancer, usually no single risk is particularly large. There may be a few risks in any one person. So it’s often difficult to say absolutely what caused breast cancer in that person.

It’s likely a combination of the effects of a person’s risks combined with an element of bad luck. This is different, for example, to lung cancer where smoking is the clear cause in many cases.

Oestrogen, the predominant female hormone mainly produced by the ovaries, plays a well-known role in breast cancer development and protection. 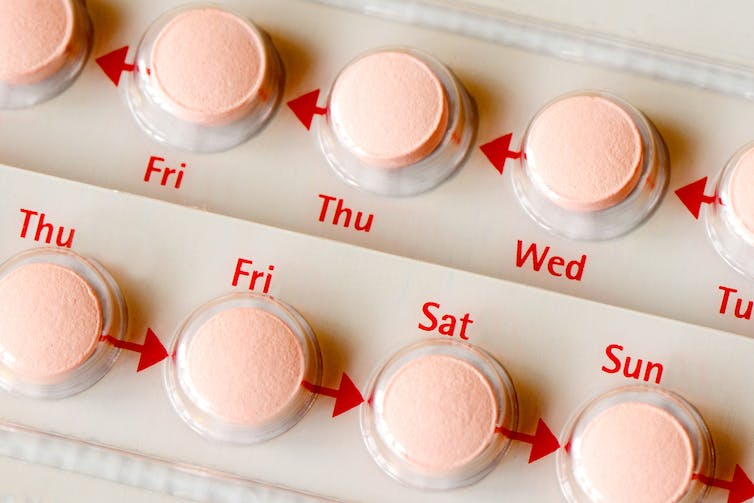 The contraceptive pill contains oestrogen and so increases the risk of breast cancer for the period it is taken.from shutterstock.com

A range of factors that are known to affect a woman’s breast cancer risk (like how many children she has) also affect how much oestrogen she is exposed to throughout life. Oestrogen causes breast development in puberty and during pregnancy helps the breasts develop for breastfeeding. Unfortunately, increased oestrogen over a long time can also cause damage to normal breast cell DNA and cause these damaged cells to multiply, which can start a cancer.

Read more: What is cancer?

Factors that increase lifetime oestrogen exposure and, with that, breast cancer risk, include having no or few children and starting your family at an older age. Oestrogen production is interrupted while women are not menstruating during pregnancy and breastfeeding, which decreases the overall lifetime exposure to oestrogen. Going through puberty earlier or menopause later, which both increase a woman’s total number of menstrual cycles, is also linked to higher risk.

Combined hormone replacement therapy (HRT) or the oral contraceptive pill, both of which contain oestrogen, increase risk for the period they are taken. However, for the contraceptive pill the risk is small, as breast cancer is rare at the age it is used. Reduced prescriptions for HRT has recently been shown to have led to a reduction in breast cancer cases.

Women who have more children earlier and breastfeed are at lower risk of breast cancer. Both cause an increase of oestrogen around the pregnancy but then lower levels than normal for many years after.

There is a widespread concern that elements of the modern diet add to breast cancer risk. But the belief that preservatives and pesticides are major contributors has never been confirmed. 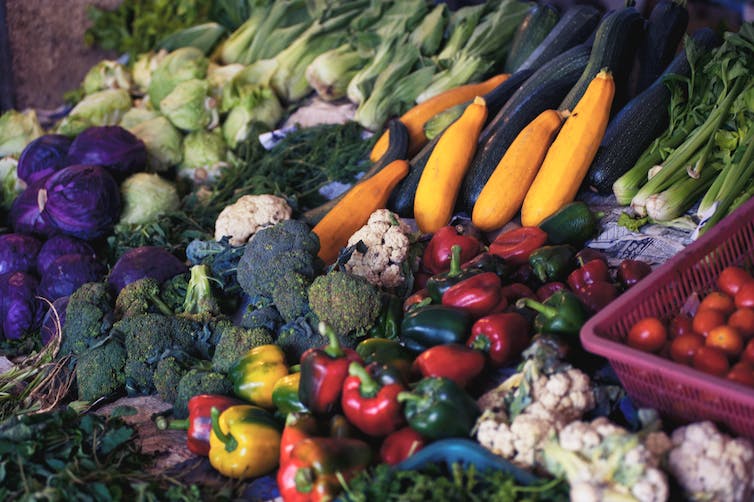 Similarly, no risk increase has been found for people consuming dairy products. Eating meat appears to cause little or no risk. But the fifth of the population eating the highest levels of red or processed meats (bacon, sausage, ham) have a 25% higher risk of breast cancer than the fifth who eat the least – and appear to have increased rates of other cancers. This is probably because processing causes small amounts of cancer-causing toxins to form in the meat.

Read more: Not everything gives you cancer, but eating too much processed meat certainly can

There is some limited evidence that eating more fish reduces breast cancer risk. This may be due to the protective effect of omega-3 fats. And there is relatively strong proof that vegetable consumption lessens risk, although how this works is not known.

Despite much being said about the protective powers of “super veggies”, such as kale, broccoli, tomatoes and strawberries, there is so far no evidence they are really better than others. Similarly, organically grown vegetables do not give greater protection than those grown in the usual way.

Alcohol increases lifetime breast cancer risk by around a tenth per drink per day for the period during which drinking occurs. Active smoking, but not passive smoking, also increases risk by about a fifth – especially in younger women. 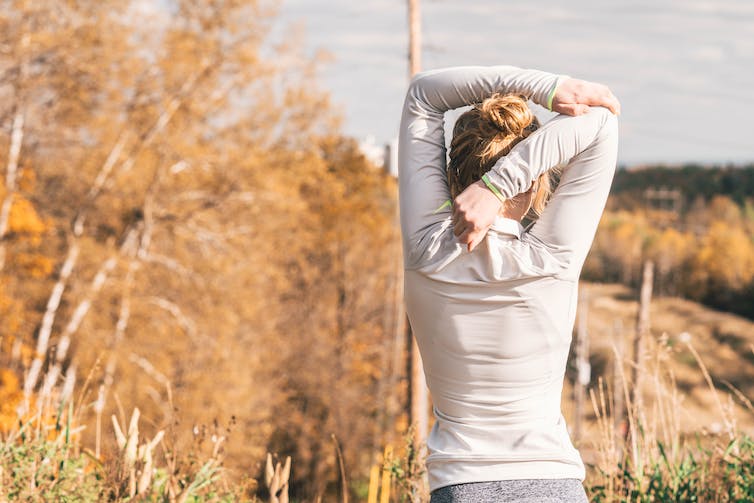 Caffeine may be mildly protective and chocolate appears safe in moderation. This is provided consumption does not lead to substantial weight gain, as obesity has repeatedly been shown to increase breast cancer occurrence by about a fifth, especially in post-menopausal women.

This may be because fatty tissues produce oestrogen. Also, obese women have higher insulin levels, another hormone that can lead to breast cancer. Those developing full diabetes in later life, when insulin levels are usually very high, are at an even higher risk – a two-fifths increase.

Read more: How obesity causes cancer, and may make screening and treatment harder

Contrary to popular belief, sugar itself does not appear to directly affect risk in moderation. However, too much sugar may increase risk indirectly through obesity, which can then cause diabetes.

Exercise substantially reduces the chance of a breast cancer diagnosis, although how this works is not yet understood. The duration rather than intensity appears important, with three hours of moderate aerobic exercise weekly reducing breast cancer risk by about a fifth. Exercise also improves survival after breast cancer.

High stress levels are widely believed by the general public to cause cancer, likely because both are common. However, large studies comparing people exposed to very high stress situations such as bereavement, bankruptcy or divorce have not found any difference.

Many researchers have also looked at whether sleep patterns might affect breast cancer, especially from nightshift work, but have not confirmed a risk.

It is well known women who inherit faults in particular genes which repair damaged DNA, particularly the BRCA 1 and 2 genes, have a high risk of both breast and ovarian cancer – up to an 80% lifelong risk for breast cancer and 40% for ovarian cancer. 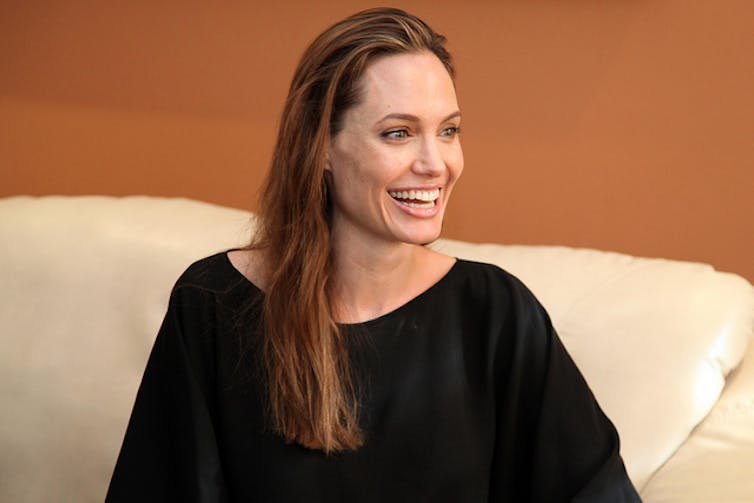 Having a mutation in the BRCA 1 and 2 genes may lead some women, like Angelina Jolie, to have preventive surgery.Cancillería del Ecuador/Flickr, CC BY

This high predictable risk leads some women to opt for preventive medication or even surgery, which includes removing both breasts and ovaries. Such solutions, although radical, give affected women the same life expectancy as women in the general population.

Even in the absence of such gene faults, a family history of breast cancer does increase personal risk. Those with a single first-degree relative (mother, sister or daughter) have approximately double the risk (http://www.breastcancer.org/risk/factors/family_history) of those with no family history or about 24% lifelong risk in Australia.

This may be due to a host of other genes that have more minor impacts on breast cancer risk. New candidates are regularly added as research continues. Unsurprisingly, many of these genes are involved in processes in the body such as oestrogen and insulin action or DNA repair, although the way some work remains unknown.

Collections of these genetic markers can be tested together in a person’s blood to better predict their breast cancer risk.

Breast density, which is the “whiteness” seen on a mammogram, is also very useful in predicting the chances of breast cancer. More dense (white) tissue predicts higher risk. Given the strength of mammographic density as a risk factor and its prevalence in the population, it is likely to influence breast cancer in a large number of women.

Read more: Women should be told about their breast density when they have a mammogram

Mammographic density is strongly related to oestrogen exposure and is also modified by menopause and HRT.

Importantly, it is the sum of all the above factors that defines personal risk. Research suggests women often do not have an accurate idea of their own risk of breast cancer, but there are several ways they can find out. 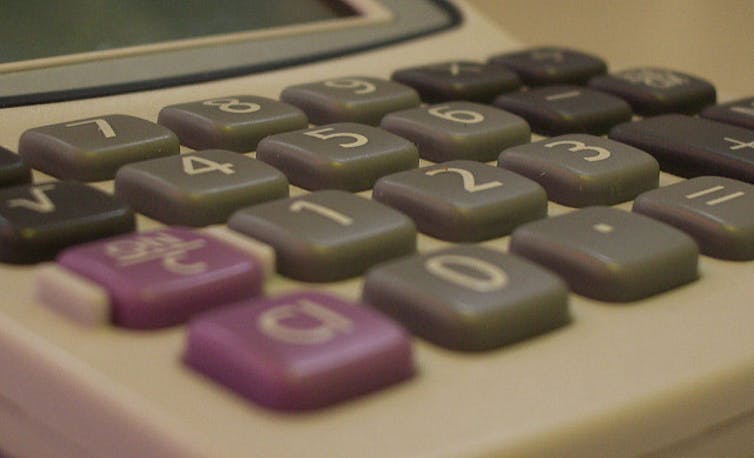 Online calculators are available to estimate your risk of breast cancer.Ben Jeffrey/Flickr, CC BY

Online breast cancer risk calculators are available, although some are designed for researchers rather than patients. A good one for patients is the Gail model, which uses family and reproductive history, as well as the occurrence of benign breast conditions, and can be filled in online. Cancer Australia also provides a risk calculator. Neither include mammographic density or the host of breast cancer genes that have been discovered, each with a small risk association. However, it can give an overall idea quite quickly.

The BOADICEA calculator is mainly used by researchers and works off a detailed family history. The Tyler-Cuzick calculator, mainly designed for use by doctors, adds mammographic density to other risk factors with the aim of making even better breast cancer risk predictions.

Clearly, predicting an individual’s risk of breast cancer without being able to reduce it would be of limited value. The above information does allow women to make a number of lifestyle choices, such adjustments being most valuable in women with higher risk.

Beyond this, drugs that limit oestrogen in the body can substantially lessen the chances of breast cancer. These include tamoxifen, which can reduce risk by about a third in all women, and aromatase inhibitors, which lessen risk by about two-thirds in post-menopausal women.

In practice, few women opt for such measures. This is likely due to concerns over relatively common “menopause-like” side effects and more serious, although rare, side effects of tamoxifen, including endometrial cancer and venous blood clots.

Good consumption of vegetables, limiting alcohol, avoiding being substantially overweight, especially after menopause, and getting regular moderate exercise will lower risk. Looking at mammographic density and considering genetic tests, especially in women with a family history, may be valuable and should be discussed with the family doctor.

Preventive medication or surgery can be used for those at high risk, usually in consultation with a breast cancer specialist.

Andrew Redfern receives funding from the NHMRC, the Cancer Council of WA and the WA Department of Health

Rik Thompson receives funding from National Breast Cancer Foundation and the Australia India Council. He is affiliated with Breast Cancer Trials as Director.