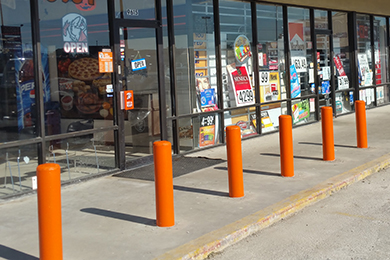 Bollards are Short sturdy posts, which are related to a tree trunk originally the term bollard was used to refer to a post on a quay or ship, which were used for mooring boats. Today the same term is used to refer to posts that are used in controlling the traffic and those posts that are designed to prevent car-ramming and ram-raiding. It dates from the year 1844 referring to the maritime bollard and in reference to Caledonian mercury in 1917; bollards are described as huge posts. On the quaysides, cannon were used as bollards to help in mooring ships.

From the beginning of the 18th century, wooden posts were used to manage traffic. In the 19th century Amsterdam, the posts were erected and became symbols of the city but today, they are being replaced with elevated sidewalks.

In the context of maritime where the word originates a bollard is a post, wooden or iron which is found as a deck fitting on a ship. It secures ropes for mooring, towing and such purposes. The term bollard is also termed as a piece of wood on the head of a whaleboat. Maritime bollards are usually cylindrical and have a larger diameter to discourage mooring warps. Some of them will have a cross rod and allows the mooring lines to coil into figure eight.

Controlling traffic is one of the tricky things especially in a busy location; parking near buildings or other busy places. They are placed strategically to narrow the available space and therefore vehicles move slowly or are obstructed from entering into the restricted area. Others are put in a way to allow some specific cars and bikes and this brings order in the specific place. You can also use bollards to control overspill traffic on the verges and sidewalks. For road traffic control, the fluorescent orange and red plastic ones are used for delineation in busy motorways and arterial roads. Most of these bollards are made with collapsible materials so that when a vehicle at a high or low speed knocks it, it resumes its normal position.

These are traffic bollards, which are illuminated and have been here for the longest time since the 1930s. They have a base light unit at its foundation, which helps in illuminating the board from all sides. It is usually housed before the concrete surface and thus free from damage from pedestrians and vehicles. These are common in roundabouts and road intersections to control traffic. Bollards are illuminated and that way can replace road signs and even streetlights and therefore help in giving approaching vehicles a clue that there is an existing obstacle during the dark hours and when visibility is low. The beauty with reflective bollards is that they need minimal maintenance and don’t need power.

This type is used in deflecting car tires. It is mounted at the lower part using a wheel and has an increasing slope. Thus, heavy goods vehicles cannot destroy these bollards.

Bollards come in different types and the most important thing is to get a good company that will supply you with the best of the type that you need.