Only days after the federal government announced a A$1.7 billion vaccine deal to roll out COVID-19 vaccines to Australians in 2021, one of the two candidates has halted its phase 3 trials after a participant became ill.

The AZD1222 vaccine, considered one of the frontrunners in the global race for a COVID-19 vaccine, was developed by the University of Oxford and has been undergoing testing with British-Swedish pharmaceutical company AstraZeneca.

Melbourne-based biotechnology company CSL has committed to producing and supplying more than 30 million doses of the vaccine to Australians if it’s found to be safe and effective.

But this pause in the trials doesn’t necessarily mean it’s not safe. Rather, it indicates the testing is progressing as it should, with due consideration of safety.

There’s been no official statement on the nature of the incident that caused the trial to be halted. We only know it was a suspected adverse reaction in a participant in the UK. (Phase 3 trials for the AZD1222 vaccine have been taking place in several countries.)

The New York Times has reported the participant was diagnosed with transverse myelitis, an inflammatory condition than affects the spinal cord and can be sparked by viral infections.

Transverse myelitis is very rare, with between one and eight new cases per million people per year.

Most people will recover, but may be left with some symptoms such as weakness.

Read more: Putting our money on two COVID vaccines is better than one: why Australia's latest vaccine deal makes sense

In the world of vaccine safety, transverse myelitis is one of several conditions collectively known as a serious acute neurological episode (SANE) temporally associated with vaccination. Others include Guillain-Barré syndrome and acute disseminated encephalomyelitis.

“Temporal” suggests they occasionally occur some time after vaccination, but we don’t know whether the relationship is one of cause and effect. Unfortunately, it’s not always easy to find what caused these conditions, and it’s important to look for other infections that may be associated with the diagnosis.

There are a couple of things worth noting in this case. First, in the UK branch of the trial, not all participants were receiving the AZD1222 vaccine. To ascertain its effectiveness, researchers have given a control group a type of meningococcal vaccine (MenACWY) that has already been licensed. As the trial is double-blinded, we don’t yet know whether the affected participant received the COVID-19 vaccine.

Second, AZD1222 is not a “live-attenuated” vaccine — it’s not made from live SARS-CoV-2 virus. (It does use a chimpanzee adenovirus vector, but this doesn’t replicate or cause disease in humans.) It’s not impossible the transverse myelitis — if confirmed as a diagnosis — was related to the vaccine. But it wouldn’t be possible for the vaccine to cause a COVID-19 infection, which could then spark the myelitis.

Further, phase 2 and 3 trials involve much broader populations than the young, healthy adults who typically participate in early testing. The UK trial of AZD1222 includes people 70 years and older, which naturally increases the risk of temporally associated adverse events. 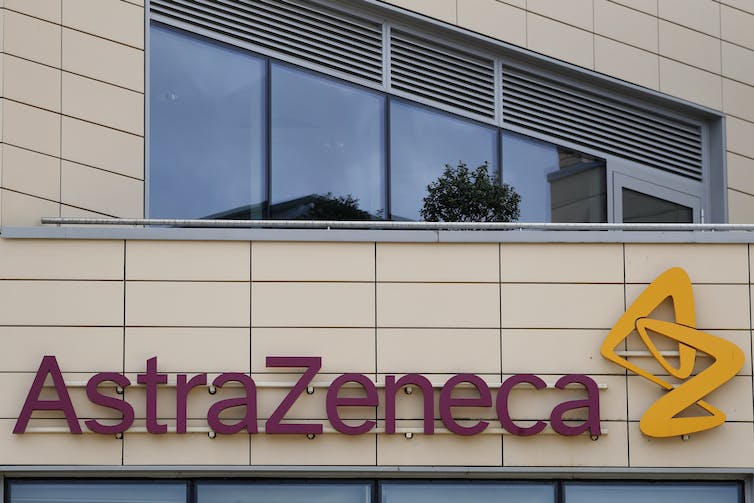 The University of Oxford vaccine is being tested together with pharmaceutical company AstraZeneca. Alastair Grant/AP

AstraZeneca will already be investigating the incident, with input from external regulatory bodies such as the study’s data safety monitoring board, the European Medicines Agency (EMA) and the US Food and Drug Administration (FDA).

These independent bodies will review all parts of the investigation, such as an MRI on the participant to confirm the diagnosis, and look at which of the groups the person was in (whether they received AZD1222 or the other vaccine).

They will try to find out what caused the illness, but this may not be possible. It will be particularly hard to prove the vaccine caused the illness with only one case. Illnesses like transverse myelitis, although rare, have a “background rate” of occurrence already in the community.

The World Health Organisation provides a framework to assess the cause of an adverse event following immunisation. AstraZeneca and the independent bodies monitoring their processes will follow this or similar frameworks to evaluate the event.

Once they’ve reviewed the incident, they will decide whether to resume the trial. Given the impetus to move quickly with this, we’d expect this to happen in a matter of days.

It’s not a bad thing

This halt on the trial doesn’t indicate the vaccine isn’t safe — we’ll need to see further evidence before we can ascertain this.

But it does reflect robust processes for a clinical trial. In a sense, this is what phase 2 and 3 clinical trials are designed for — to pick up any potential safety issues and investigate them further.

These sort of things happen occasionally in other clinical trials too. We just don’t hear about it. There’s perhaps never been so much attention on a single clinical trial as there is on the trial of this and other potential COVID-19 vaccines.

We’re not sacrificing safety for speed

In the course of this pandemic, we’ve often heard that fast can’t be safe in the context of a vaccine. We don’t feel that’s the case here.

The reason these trials are moving so fast is largely because recruitment is happening quickly. The phase 3 trials of AZD1222 will have 40,000-50,000 participants in total.

Beyond the AZD1222 vaccine, we’re seeing open disclosure of processes and transparency around any issues. This includes a pledge from the major pharmaceutical companies to keep safety at the forefront when evaluating COVID-19 vaccines.

Of course, there are exceptions to this — notably the Russian vaccine, which has published some phase 1 data but reportedly gone into widespread use before completing all of the standard safety and effectiveness checks.

Read more: Whoever invents a coronavirus vaccine will control the patent – and, importantly, who gets to use it

In Australia, we follow certain steps to assess the safety of new vaccines. If the trial of the Oxford/AstraZeneca vaccine resumes and it proves safe and effective, Australia’s Therapeutic Goods Administration (TGA) will see the data and interact closely with regulatory bodies around the world to ensure it’s safe to use.

The TGA is also responsible for post-marketing surveillance, which we regard as phase 4. When the vaccine is being rolled out, we continue to monitor for adverse events, and follow these up using both jurisdictional vaccine safety units, such as SAEFVIC in Victoria, and active surveillance systems, such as Smartvax and Vaxtracker.