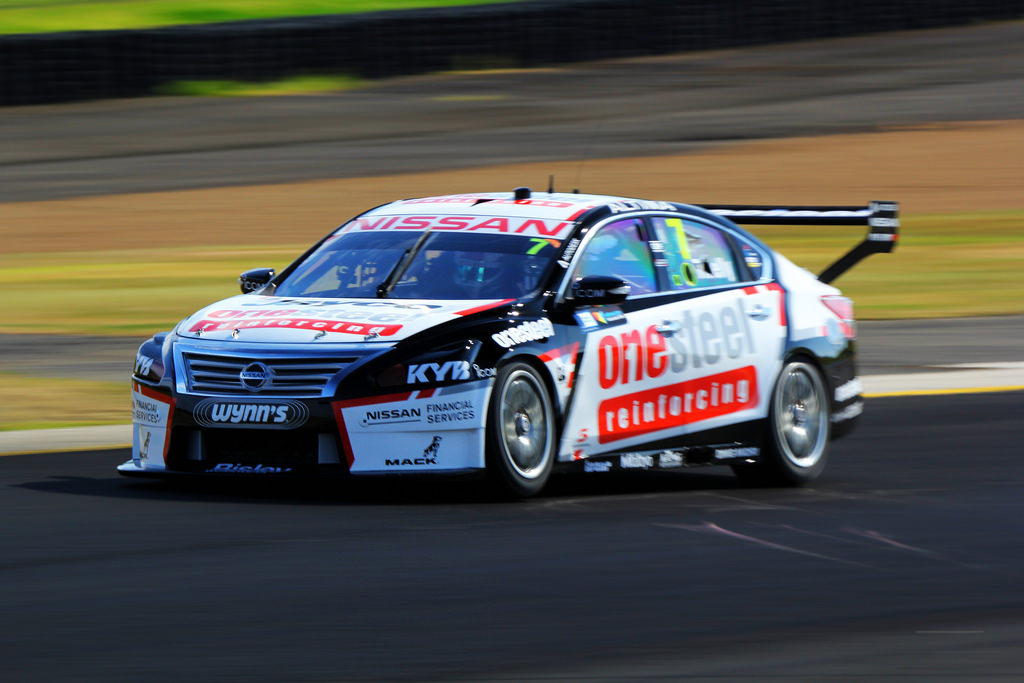 Two qualifying sessions and two sprint races made up the day’s on-track action with Jack Daniel’s Racer Rick Kelly achieving the best result of the quartet with a 6th place finish in the day’s first race.

After qualifying his #15 machine in 8th place for the first 16 lap sprint, Rick Kelly made up two positions on lap one. Kelly battled with Andre Heimgartner for the last half of the race, eventually winning an exciting drag across the line to maintain his 6th position.

Rick made an excellent start in the day’s second race passing three cars in the opening lap. He unfortunately was then tagged on the same lap, narrowly missing the wall, before rejoining the race in P13.

Also making progress in race one was Toshiba backed James Moffat who passed three cars on the opening lap. After a steady race he crossed the line in 12th position.

Despite the encouraging result in race one James was also involved in a lap one incident during the second race which put him to the rear of the field after qualifying 18th.

Struggling with car balance and potential damage from the incident James brought his car home in 18th place.

OneSteel Reinforcing racer Todd Kelly struggled with his car during the first race after qualifying his #7 Altima in 15th position. Despite driveability issues he was able to hold off Garth Tander in the closing stages of the race to cross the line in 17th.

The Car #7 crew were able to fix the setup issues before race two but after a terrific start from 22nd on the grid Todd was also involved in a lap one incident which saw his Nissan Altima sustain a broken steering arm.

The Team fixed the damage and Todd re-joined the race two laps down, eventually crossing the line in 25th.

Michael Caruso expressed his frustration after his race one assault was marred by a bad sportsmanship flag for kerb hopping.

After qualifying 18th he was also able to make up spots in the opening lap, eventually bringing his Nissan Nismo backed entry home in 16th position.

With the threat of a pit lane penalty looming Michael entered the second race with caution, starting and finishing the race in 15th position.

Sydney Motorsport Park will host the V8 Supercars again tomorrow with a qualifying session and a 52 lap race in what is expected to be a wet day on track.

“I tell you what, it was really really interesting in that final race.

“Turn eight on the first lap, there was obviously overlap on my left that wasn’t there on the way into the corner, it was a fair hit, and it took me straight off onto the grass at 45 degrees to the wall.

“So it was a little bit hectic there for a bit, I lost three spots and got back on.

“George (Commins, race engineer) and the boys have made some strong improvements between the races, with what is a bit of a different setup for us.

“It’s pretty exciting to have such good tyre life on the soft while we were struggling a little bit on the hard compound in the earlier race, where normally it is the soft tyres that are tough.

“Thanks to the guys for making some good progress, we can learn from that tonight and tune her up for tomorrow’s long race.

“To have an incident, get shuffled back, and then pass people is a big buzz for us, the guys have done well.”

On the close finish in the first race-

“We were struggling to keep our head above water for the last couple of laps with the car,” said Rick Kelly.

“It’s the first time we have done that number of laps with the car here with the setup we were running.

“We got there in the end, we were holding up (Andre) Heimgartner in the first race, then we got by him in the second race.

“For us that’s great, you always want to race rather than hold people up, but in the last one we had the car to race, so it was very enjoyable.”

“We have been chasing the car quite a bit all weekend and there hasn’t really been a point where in practice we’ve had good enough tyres with a set up I’ve been happy with.

“The first race was a real struggle with the balance.

“There were a lot of cars in as much trouble as I was but in the end the pace was nowhere.

“The last race was opposite to the first. The start I got quite a few positions and the car felt like it wasn’t going to be too bad.

“I got sandwiched between two cars and bent the steering and had to pit to replace the steering arm and that was the end of our day.

“It was a pretty average day, we’ve got quite a lot of work to do to work out how to fix the car for tomorrow.”

“From that point on it was a reasonably tough race for us, the car isn’t where I need it to be this weekend. It was plenty of hard work.

“We ended up 12th in the first race which was all the speed we had.

“I had contact with Scott Pye in race two. We went into turn four, he knew where I was and he knew where Michael (Caruso) was. Then into turn 5 I think he just thought one of us would miraculously disappear.

“He turned in across me, I was in the middle. I bounced up in the air in quite a savage impact and lost a lot of track position.

“I suspect something in the car might have been a bit bent from that point forward but generally we are really struggling and need to do a lot of work overnight to come back with a better car tomorrow.”

“We had drivers briefing on Friday afternoon, V8 Supercars wrote out the rules for us. For tripping the loops we got a tap on the shoulder then a bad sportsmanship flag followed by a pit lane penalty.

“In the first race I tripped the loop a few times, I got the tap on the shoulder at turn 5 but by the time I finished the lap they had already put the bad sportsmanship flag out.

“The rule was changed from what they had given us on Friday afternoon.

“Obviously I then had to be very very careful in the second race in the way I approached the loops.

“You can’t race different rules like that in a parity category.

“We’ve also got a few problems with the drive line at the moment but the crew are working tirelessly to get on top of them. They get an A plus for effort.”