This week US President Donald Trump made good on his threat to withdraw the United States from the World Health Organisation (WHO) by sending a formal letter of withdrawal to the UN Secretary-General.

In so doing, the president has initiated the Congressionally-mandated 12-month countdown to withdrawal that will take effect in July 2021. That is, unless it is over-turned, as presumptive Democratic nominee Joe Biden has immediately pledged to do if elected.

But if the United States’ exit goes ahead, it will be a hit to global health cooperation and place lives at risk in the US and beyond.

Questions persist about the president’s legal authority to unilaterally withdraw the United States from the WHO. But under the conditions imposed by the US Congress in 1948, the president must first ensure payment of any outstanding dues before the withdrawal can take effect.

According to some estimates, the US government currently owes US$58 million to the WHO in unpaid dues, as well as a further $110 million to the Pan-American Health Organisation, the branch of the WHO covering North and South America.

The withdrawal threatens US lives

According to the American Medical Association, American lives will be placed at “grave risk” if Trump’s withdrawal from the WHO is not reversed. Digging a little deeper, it’s not hard to see why.

Twice a year, for example, the WHO Global Influenza Surveillance and Response System (GISRS) provides WHO member states with vital information on the dominant influenza strains circulating around the world. This data is then used to develop life-saving influenza vaccines. If enacted, the United States’ withdrawal will mean it’s officially excluded from this global network, placing the country at a distinct disadvantage ahead of every flu season.

The implications could be profound, given that in 2018-2019, 34,200 Americans died of seasonal influenza-related illness despite having access to vaccines developed using GISRS data. 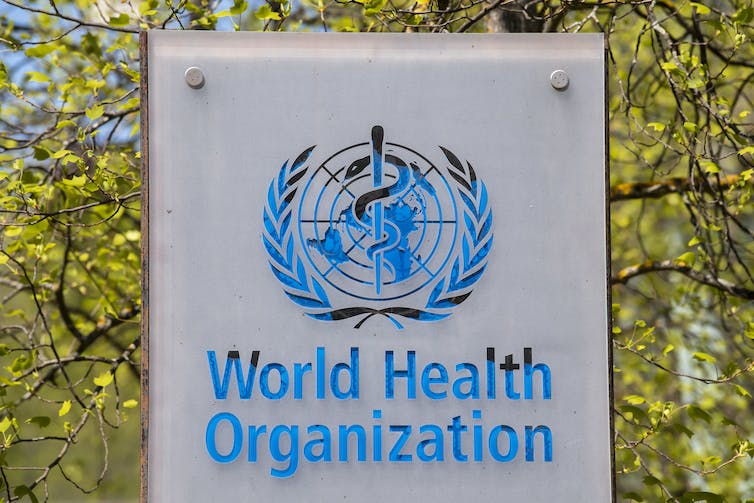 The United States played a pivotal role in helping to create the WHO in 1948. Just over 70 years later, President Trump is withdrawing the country from the agency amid the COVID-19 pandemic. Martial Trezzini/EPA

Likewise, important international discussions about vaccine research and development on diseases that threaten American lives will likely now occur without US scientists being involved. International guidelines on best medical practice will continue to be produced by the WHO but without US input.

The US has benefited for decades from obtaining advance warning about disease outbreaks in other parts of the world through the WHO’s Event Information System, but this will no longer be possible. The US would be effectively cut off from such alerts, forced to rely on foreign media or public WHO announcements.

Aside from the notable health consequences, withdrawing from the WHO will mean the country no longer has a seat at the negotiating table on what future reforms are needed to make the WHO a more effective global health agency. This is something many of Trump’s advisers and supporters had wanted to see happen, but the president’s actions will relegate the United States to the sidelines.

Read more: The world agreed to a coronavirus inquiry. Just when and how, though, are still in dispute

The future of global public health is at stake

The United States has traditionally remained one of the most generous contributors to WHO-led global health initiatives, providing almost twice as much as most other donors. Because of US withdrawal, the future viability of polio eradication, tuberculosis control, and access to HIV/AIDS treatment initiatives, just to name a few, are now all at risk.

US withdrawal is likely to have a significant impact on public health in the region. The Pan-American Health Organisation (PAHO) is on the verge of insolvency as a result of unpaid dues. The US is currently the primary debtor, owing 67% of the unpaid fees.

Even before the COVID-19 pandemic, PAHO provided vital technical assistance and expertise unavailable throughout many Latin American countries. In the event PAHO is allowed to go bankrupt, the impact on regional health programs such as maternal and child health, not to mention the pandemic response, will likely contribute to considerable loss of life.

For the World Health Organisation, the departure of the United States will be a significant blow. For many years the level and extent of technical cooperation between the global health agency and the US Government has contributed to making the world safer and healthier. Such collaboration is now under threat.

As with the EU’s approach to negotiations on the United Kingdom’s “Brexit”, the WHO’s remaining member states now have to make an example of the United States, ensuring that it is excluded from multiple WHO initiatives. If they do not, it risks more countries threatening to withdraw. The future of global public health is at stake, and the actions of one country cannot be allowed to undermine decades of multilateral efforts to improve the health and well-being of all peoples of the world.

In the event the United States does withdraw from the WHO it will sit in a unique category: that of a global health pariah.

America First is increasingly looking like the new reality will be America Alone.

Read more: The next once-a-century pandemic is coming sooner than you think – but COVID-19 can help us get ready