The referendum on legalising recreational cannabis use is just over a month away. Campaigns for and against the change are well under way.

We’ve had expert reports from the Helen Clark Foundation, the Office of the Prime Minister’s Chief Science Advisor, the New Zealand Institute of Economic Research and meetings around the country to discuss the likely effects of the Cannabis Legalisation and Control Bill (CLCB).

So, what can be learned from other countries that have already legalised cannabis or reformed their laws? And how does New Zealand’s proposed law stack up against the overseas evidence?

What other countries have done

We recently collaborated with an international group of drug policy experts on a book looking at a range of cannabis law reforms around the world over recent decades. These include:

There are significant time lags between law change, establishing legal cannabis markets and apparent impacts on use, dependency and mental illness. For that reason, researchers have concluded it may take ten years to fully understand the outcomes of legalisation.

However, preliminary evaluations of commercial cannabis legalisation suggest it has led to fewer arrests and significant taxes earned from sales.

At the same time, there is emerging evidence of increasing adult use and dependency, and industry influence over regulatory development.

Read more: Teen use of cannabis has dropped in New Zealand, but legalisation could make access easier

The evidence on whether legalisation has increased youth use is mixed. More research is also needed to understand the impacts on drug driving, emergency hospital admissions and treatment demand.

One of the main rationales for legalisation is that it will eliminate illegal markets and provide products of known purity and potency.

The experience in the legal cannabis states of the US, however, clearly demonstrates the challenges of developing regulatory controls of pesticides, fertilisers and product potency.

Early experience suggests legalisation can substantially reduce, but not eliminate, the black market. Legal production and competition also drive down the price of legal cannabis and therefore price-linked tax earnings.

Industry targets daily cannabis users as they are responsible for the majority of sales. Many of these users may be at risk of dependence and other harms.

On the other hand, legalisation provides opportunities to address social equity issues related to cannabis enforcement, including discrimination against minorities and disproportionate penalties.

This can even extend to expunging previous convictions and supporting cannabis business and employment in affected communities. 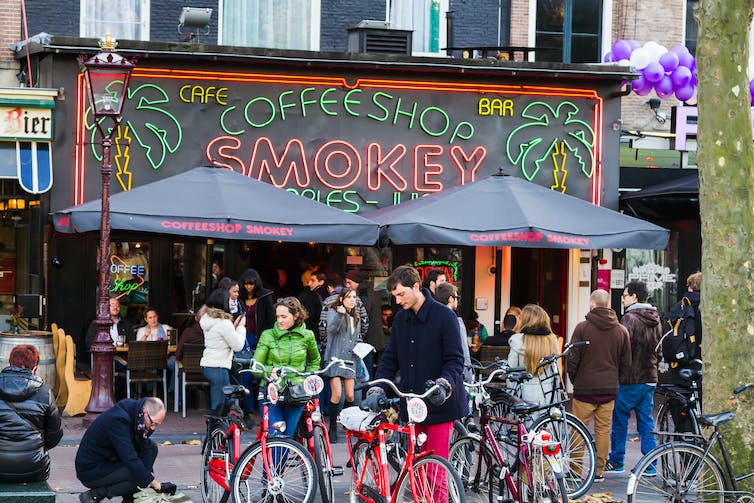 A legal cannabis cafe in Amsterdam: regulation and enforcement will be key to successful law reform. Shutterstock

It’s important not to view the legal cannabis debate as a competition between extremes – strict prohibition on the one hand and profit-driven markets on the other. Drug policy experts point to a number of middle-ground policy options that have received a lot less media and research attention.

For example, non-commercial methods of legal cannabis supply, such as home cultivation and cannabis social clubs, have proved popular in Uruguay and Spain. But there are questions about whether these will be attractive to all types of consumers.

Similarly, community trusts in New Zealand offer an alternative approach to reduce commercialisation and provide funding to local community services. Rules would be needed, though, to prevent cannabis companies from using community funding to enhance their public image and political influence.

Finally, many of the key lessons from regulatory responses to alcohol and tobacco harm are highly relevant to the regulation of legal cannabis. This includes minimum pricing, limits on the density of retail outlets, plain packaging, smoke-free policies and restrictions on advertising.

State or not-for-profit monopolies for alcohol have been effective at achieving public health objectives and could be considered for legal cannabis sales.

How does the New Zealand bill stack up?

While there is much we still don’t know about the full consequences of cannabis legalisation, there is a strong case for a conservative regulatory approach that seeks to limit the adverse impacts of the new market and curtails industry power.

This makes more sense than allowing profit-driven commercialisation and then struggling to roll back the consequences, as happened with tobacco.

Much of the CLCB is broadly consistent with this restrictive approach to cannabis legalisation. It provides for government licensing of production, no advertising, plain packaging, outlet controls, excise tax based on weight and potency, and provisions for community partnerships and not-for-profit retail outlets.

However, the CLCB could be strengthened with a lower potency cap, formal minimum pricing, a commitment to a high excise tax, and provisions to allow cannabis social clubs.

The recent attempt to regulate the harmful “legal high” market in New Zealand highlighted the importance of adequately resourcing regulatory agencies and enforcement, engaging with key health stakeholders and communicating policy aims to the public.

If the referendum passes, then, careful attention will be needed during implementation to ensure the law realises its harm-minimisation goals.