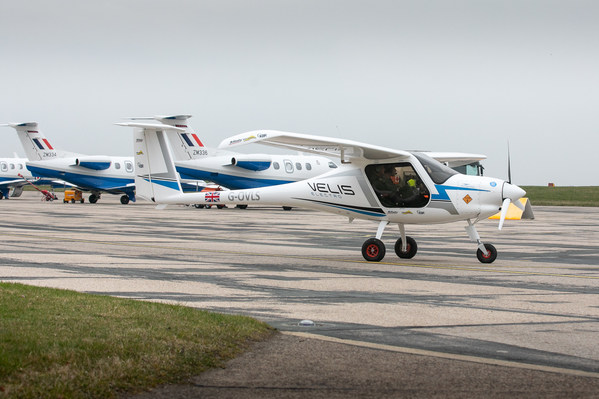 The concept of trialling zero emissions aircraft, and the subsequent pathfinder, was brought to the Ministry of Defence by Elbit Systems UK through its joint venture with KBR Inc, Affinity. The introduction of this pathfinder demonstrates the company's commitment to providing innovative solutions for the UK Armed Forces and addressing the needs of the future.

In line with the Ministry of Defence's 'green' transformation, the flights aim to help the Royal Air Force (RAF) assess the technology of electric aircraft, determine its effectiveness as an impactful pilot training capability and realise the net-zero ambitions of the service's ASTRA initiative.

The flights used a fully certified two-seater pilot training aircraft, the Velis Electro. Flight and safety assurances were developed during the summer of 2021, which was organised and delivered by the team from Elbit Systems UK, through Affinity, in partnership with the Civil Aviation Authority.

The pathfinder programme was split into three phases. As part of Phase 1 in December 2021, test flights took off from Damyn's Hall, Essex, and continued into January 2022. Phase 2 commenced in March 2022, and saw the aircraft join Affinity's existing fleet at RAF Cranwell, where up to twenty additional pilots will fly the eco-friendly aircraft. Finally, Phase 3 of the flight trials will welcome senior government officials and observers.

Martin Fausset, CEO of Elbit Systems UK added: "We are delighted to be leading this exciting initiative with the Ministry of Defence. The concept of zero emissions aircraft being utilised by the RAF has always been considered hypothetical and we are proud to have proposed and delivered initial capability for this pathfinder. Elbit Systems UK has always been, and continues to be, at the forefront of advances in the Defence industry, supporting our Armed Forces as they address the requirements of tomorrow."

Elbit Systems UK Ltd. holds three wholly owned subsidiaries as well as two joint ventures. In total, over 600 personnel are employed by the Elbit Systems UK companies in the UK, in high tech roles in the defence, aerospace and rail sectors. The two joint ventures were formed in order to deliver the Watchkeeper programme for the British Army and to supply and support three fleets of aircraft within the UK MOD Military Flying Training System (UKMFTS) programme. Elbit Systems UK is an established supplier to the UK Armed Forces, participating in several major Defence programmes such as Selborne, Morpheus and MEWSIC Increment 1, and delivering the Dismounted Joint Fires Integrator and Joint Fires Synthetic Trainer.