There a range of factors to take into consideration when you’re choosing where to live. However, something you might not have given too much thought to is commuting times. OpenAgent has compared a range of areas across Sydney to determine how much you can save on your commute by moving to a neighbouring suburb.

Data from a CoreData survey has revealed that over half of those looking to purchase a new home didn’t consider the cost of commuting. With the average Sydney commuter spending over an hour commuting every day and costs ranging from $1,500 to $5,000 a year, it’d be silly to ignore commuting times when choosing where to live.

When comparing neighbouring suburbs, the difference in commuting times to the CBD using public transport is drastic for many areas. Not only can you save thousands of dollars, you can also be saving a considerable amount of time each day. Often, the median house prices are also comparable. Sometimes, it’s even cheaper to choose the suburb with faster commutes and cheaper travel costs. 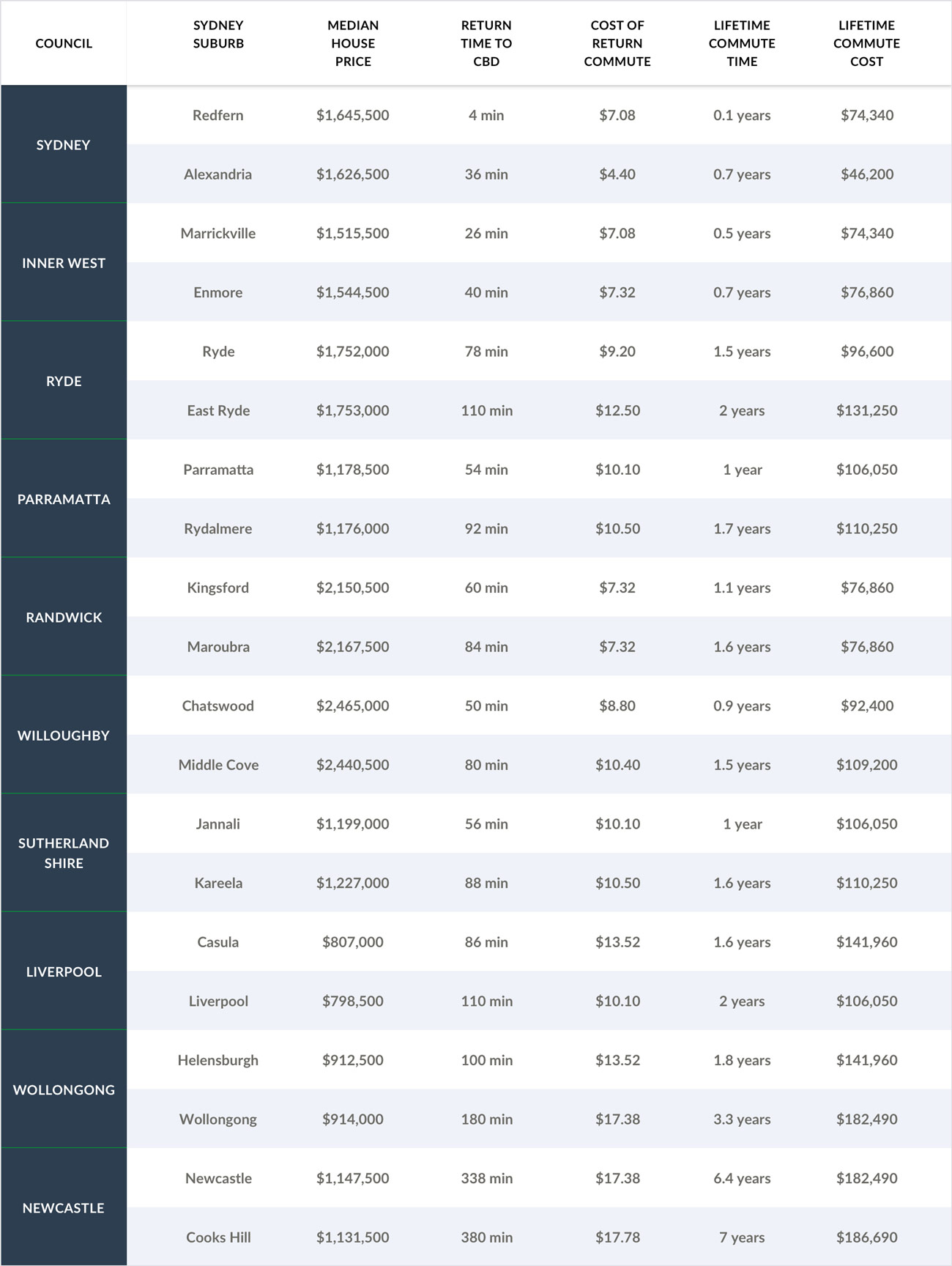 For example, these new insights have found that you can save $40,000 in travel costs and 1.5 years in commuting time to the Sydney CBD just by moving from Wollongong to the neighbouring suburb of Helensburgh. Every day, this would be saving you $3.86 and 80 minutes. With all the spare time, you could walk around all of Australia three times!

Hence, if you’re looking for a new place to live, you should consider looking into the public transport routes to where you work. A neighbouring suburb might save you a considerable amount of time and money. This could be because a certain area is closer to the train station, meaning you won’t have to take any buses.

Not only is your commute important in terms of saving time and money, it could also make a huge difference on your physical health. The more you sit, the less time you have for exercise and the more opportunity you have to eat extra snacks that you don’t necessarily need. This could lead to higher blood pressure and obesity.

On a similar note, commuting can also take a toll on your mental health. A study on commuting and personal well-being found that for every extra minute travelled, self-satisfaction and happiness declined. This makes sense with public transport often being crowded, uncomfortable and unpredictable.

Ultimately, taking commute times into consideration is a must when choosing where to live, especially if you’re travelling a fair distance to work every single day. You might be willing to sacrifice some time for cheaper travel or vice versa. Make sure to have a clear understanding of which priorities are most valuable to you.

Guest author: James Pointon is a Commercial Manager at OpenAgent.com.au, an online agent comparison website helping Australians to sell, buy and own property.