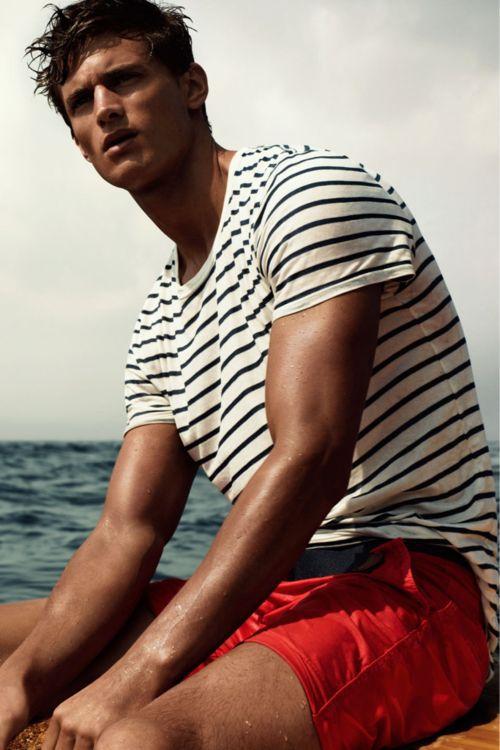 A quintessential part of our wardrobe, T-shirts have evolved into countless styles, ranging from the basic to the high-end. Initially worn as underwear, navy sailors when at the equator, in the late 19th century, started slicing their ‘union suits’ to adapt them for wearing during the hot summers. Finding them comfortable to wear, the practice extended and in 1913, it was formally adopted by the US military as an official undergarment – the cotton short-sleeved version of the original union suit.

But how did the T-shirt turn from being an unmentionable undergarment to near- ubiquity? Well, two factors were responsible for this transition. The first was the soldiers, of course. Finding the garment comfortable and having got used to wearing them, the soldiers continued the habit even after returning home from WWII. This was further enhanced when Life Magazine, in their July 13, 1942 issue, put a printed tee on their cover.

The second factor was Hollywood and star power. The year 1951 saw Marlon Brando, swooning the film going audience with ‘A Streetcar Named Desire’, where he was seen nearly throughout the movie in a white undershirt. The unmentionable clothing transformed overnight from an undergarment to a fashionable must-have - the T-Shirt.

For a simple garment, the modern-day T-shirt is available in a variety of fabrics, designs, styles, and fits. To find the perfect T-shirt for your wardrobe, check out JasperHollandCo.com for their range of styles, designs, and fabrics. However, even a garment as simple as the T-shirt has some standard features that you need to know. Let us look at some of the various distinguishing features of this must-have garment.

While there are many different types of collars, let us look at the three basic styles.

The Crewneck – Paying homage to the original garments nautical origins, the crewneck is probably the most worn style globally. Featuring a round neckline, which may or may not be ribbed, the crew neck fits snugly around the base of the neck. Crewnecks can be worn either under a shirt or on its own.

The V-neck - This style was originally introduced to hide the neck of the undershirt when worn below a shirt with the first few buttons undone. Since then, the V-neck has become a style of its own and can be worn either under a shirt or by itself.

The Henley – A mix between the polo and a T-shirt, the Henley is increasingly becoming popular. With buttons that add a subtle but noticeable touch, this can be worn both casually as well as a semi-formal garment.

T-shirt sleeve lengths are generally of three types and are easy to decide upon depending on the weather and occasion.

Sleeveless – This one is a little tricky in terms of carrying it off. Ranging from really thin straps to basketball jerseys, the sleeveless T-shirt should not be too baggy or tight. Aim for average-sized shoulder straps and armholes.

Short Sleeves – This is the most popular sleeve style with the sleeve length halfway to your elbows. A T-shirt that can be worn at any time of the year and almost everywhere – at the gym, in a casual setting and as a semi-formal under a jacket.

Long Sleeves – Perfect for cool weather, neither should the sleeves go over the wrist; nor, should the hem hang longer than the beltline. It can be worn with the sleeves full or pushed up till the forearms.

While a simple garment and easy to wear, it can also be one of the most challenging pieces of clothing in your wardrobe in terms of getting the fit right. Too loose a fit and it would resemble a nightshirt; too tight and it would highlight parts that you may not want to flaunt. In general, the fitting of different parts of the T-shirt is as follows.

Torso – The correct length of a T-shirt should not be longer than where your belt line ends. If it reaches the top of your fly, well, that is too long.

Stomach – Unless you have a six-pack that you want to flaunt, the T-shirt should conform to the shape of your body – neither too loose nor too tight.

Shoulders – Ensure that the seams of the T-shirt line up with your shoulder line.

T-shirts can be worn both in a casual or formal setting. Here to stay, this common piece of underclothing is now a staple in everyone’s wardrobe.