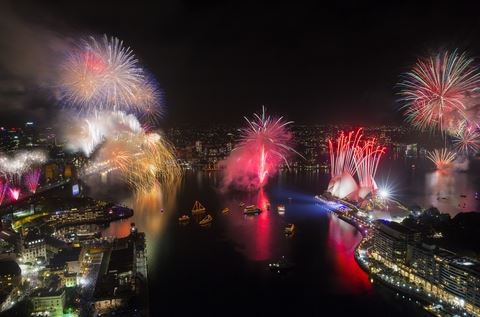 With Sydney set to throw the world's most exciting New Year's Eve party featuring outstanding fireworks displays, Destination NSW reveals some of the city's best vantage points and parties for revellers to ring in the New Year.

NSW Minister for Trade, Tourism and Major Events Stuart Ayres said, “Sydney is the first major city in the world to ring in the New Year. All eyes are on our beautiful Harbour as it comes alive with the biggest New Year's Eve show in the world.

Destination NSW Chief Executive Officer Sandra Chipchase said, “Sydney's New Year's Eve celebrations attract visitors from across the country and the globe – all keen to celebrate on Sydney's beautiful Harbour on a warm summer night. The world's largest New Year's Eve spectator celebration is a great way to begin or end a memorable holiday in NSW.”

For those visitors planning their trip to Sydney's world-renowned New Year's Eve fireworks, Destination NSW suggests they catch the festivities from one of the following hotspots:

This year, celebrate New Year's Eve at Sydney's sensational new harbour headland park, Barangaroo Reserve. The Reserve will offer superb value for a prime view of the iconic Sydney Harbour fireworks and this year's new illuminations on the western façade of the Harbour Bridge. Gates open at 6.00pm and the site will feature light entertainment, picnic spaces and family-friendly alcohol-free zones, as well as licenced areas. Tickets are priced at $14.50 for children and $29.50 for adults (children aged three and under are free).

Campbell's Cove, located on Hickson Road north of the Overseas Passenger Terminal, offers front row views of the Sydney Harbour Bridge and Sydney Opera House.  Revellers are advised to arrive early as the area usually closes to new arrivals at around 4.00pm. Admission: Free;Opening times: 8am 31 December to 2am 1 January.

Sitting 47 floors above the city and offering 360 degree views from the deck of a revolving restaurant, O Bar and Dining is one of the most exclusive places in Sydney to see in the New Year. Choose to dine in the relaxed tapas lounge or take in Sydney from all angles in the unique circular dining room. The cuisine is based on chef and owner Michael Moore's healthy eating philosophy and complements an extensive wine list and innovative cocktail menu of modern, classic and vintage drinks. Tickets start at $395.

The Botanic Gardens Restaurant will host an exquisite garden party this New Year's Eve with open-air dining and an exclusive vantage point to watch the fireworks. Guests can enjoy French champagne and canapés on arrival, followed by a seven-course degustation menu. Live music will be played all night and a private lawn will provide the perfect spot to witness the harbour fireworks in all their glory. Tickets are priced at $500per person (18 years+ only).

Mrs Macquaries Point is one of the most popular viewing spots for New Year's Eve due to the location's fantastic views of the fireworks displays. This vantage point also offers catering and bar services for purchase. Admission: Free;Opening times: 10am 31 December to 12.30am
1 January.

A new event in 2015, Shark Island will be transformed into an island paradise this New Year's Eve. Guests will be treated to a South American-inspired party with fabulous food, live music and some of the best views of Sydney Harbour. Dance all night to the sounds of Aussie electronica act Juggernaut DJs (Midnight Juggernauts) and Sydney's Recess DJs and enjoy a Mexican feast of mouth-watering tacos and burritos at the pop-up taqueira. Tickets start at $160.

Sydney's four other islands – Fort Denison, Cockatoo Island, Goat Island and Clark Island – offer a range of exciting New Year's Eve events. For a luxurious evening head to the black-tie event on Fort Denison for $1,000 per person or for a more lively celebration book a ticket to enjoy a three-course meal and Garden Party on Clark Island with tickets priced at $375 for adults and $225 for children. Children under five are free.

For a 'ferry good view' of the fireworks jump aboard an iconic Sydney Harbour Ferry for a front row seat of all the fireworks action. This year, the Lady Northcott Ferry will be part of the official Harbour of Lights Parade, the centrepiece of Sydney's New Year celebrations in which a select group of vessels, adorned in brilliant lights, cruise up and down the centre of the harbour. Guests on the Lady Northcott can pack a picnic to enjoy onboard with tickets starting from $350 for adults and $299 for concession. Alternatively, revellers can stay close to shore and catch the fireworks from the back of a Ferry at Circular Quay. Tickets start at $250 for adults.

Blues Point Reserve is a fantastic location to catch all the New Year's Eve action. Head to this location early in the day to grab a spot to see the western façade of Sydney Harbour Bridge and the skies above light up. Admission: Free;Opening times: 12pm 31 December to 1am 1 January.

Welcome in 2016 at a summer beach party in the middle of the city at Opera Bar. With the Harbour Bridge directly in front, the Opera House to one side and the city skyline above, Opera Bar is one of the best spots in Sydney to watch the world-famous fireworks display. Come dressed in beach attire and dance the night away amidst palm trees and harbour views at this inner-city beach party. Kicking off at 6pm, tickets start at $394 and include express VIP entry to the Sydney Opera House, live entertainment and a 5-hour canapé package.

To nab a spot on the forecourt of the Sydney Opera House it's best to arrive as early as possible as this iconic spot reaches capacity early in the day. Food and drinks are available for purchase onsite.Admission: Free;Opening times: 7.30am 31 December to 2am 1 January.

Viewing spots around Cockle Bay are prized locations and this year will be no exception. With a free program of live music and flame-jet shows, as well as the famous 9pm and Midnight fireworks, Cockle Bay is set to be one of the most exciting, free locations to celebrate the end of 2015. Admission: Free;Opening times: 7am 31 December to 4am 1 January.

While demand is high, revellers can still book a hotel room in the city to ring in the New Year. Accor Hotels reports availability across the group's portfolio of hotels, including Novotel Sydney on Darling Harbour, Sofitel Sydney Wentworth, Pullman Hyde Park and Mercure Sydney. But travellers are advised to book fast as hotels will be at 100 per cent capacity on 31 December.