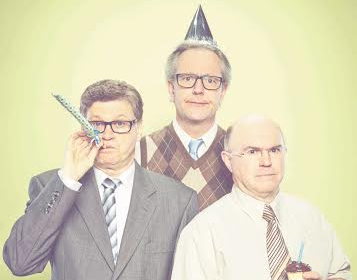 There ain’t no party like a Wharf Revue party

Australia’s favourite lampoonists return for a special birthday edition of Sydney Theatre Company’s The Wharf Revue as they celebrate 15 years of irreverent, anarchic political satire. Jonathan Biggins, Drew Forsyth and Phillip Scott will be joined by Amanda Bishop for an all singing, all dancing, hilarious birthday bash at The Wharf from 21 October to 19 December, preceded by seasons in Wollongong, Canberra, Penrith, Belrose and Parramatta.

Over 15 years and 21 shows, they’ve mercilessly mocked all the usual suspects. We’ve watched Howard Tampa with refugees, Rudd give pennies from Kevin, Gillard refuse to be lectured by “that man”, “that man” scrap the carbon tax, stop the boats and – um – get the budget back into surplus… But no one has been able to outplay, outwit or outlast The Wharf Revue. So, they’re throwing a party and everyone’s invited.

This year, The Wharf Revue will be a parade of past and present indignitaries – a who’s who of 21st century embarrassments, from the politicians to celebrities – all skewered on the stake of seriously side-splitting satirical silliness and musical mayhem.

Who will make the cut? Who has the numbers in the caucus room? It’s anyone’s guess.

“The Revue is an equal opportunity satire – no political party is left unstoned, nor cultural shibboleth unmauled.” - Stagenoise

Suncorp Twenties (tickets for just $20 for every performance by STC) become available for The Wharf Revue from 13 October. Suncorp Twenties are released for sale every Tuesday at 9am for the following week’s performances (Monday to Saturday).