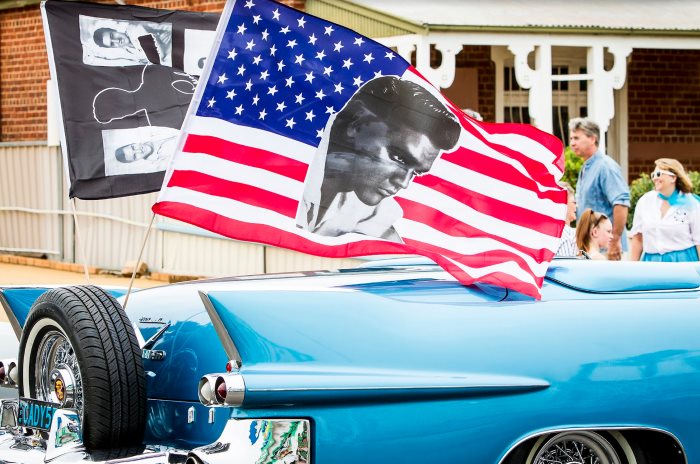 Dust off those blue suede shoes and get ready to swing those hips; the 2017 Parkes Elvis™ Festival is fast approaching! Australia’s largest celebration of the King returns to the regional town of Parkes, NSW for a festive five days from Wednesday 11 – Sunday 15 January 2017

What started as a small get together between likeminded Elvis fans back in 1993 has today grown into an internationally renowned event endorsed by the estate of Elvis Presley. The Festival turns 25 this year and will celebrate with a 'Viva Las Vegas' theme, so get set for a neon lit bejeweled sin city spectacular!

The 2017 Parkes Elvis Festival features more than 120 free and ticketed events, shows, concerts and competitions. The 2017 program is now available online and in print pocket-guide format. The Official Souvenir Program is also available for order from the Parkes Visitor Information Centre.

Parkes Elvis Festival is proudly supported by the NSW Government through its tourism and major events agency, Destination NSW.

For all programming and ticketing information, visit www.parkeselvisfestival.com.au.

Parkes Elvis Festival is held annually in the second week of January in Parkes, New South Wales, coinciding with the birthday of Elvis Presley. Parkes has a population of 12,000 and is located 365 kilometres west of Sydney. In January 2016 over 22,000 visitors attended the Festival, more than doubling Parkes’ population.

The Festival began in January 1993 as a small birthday party for the local newspaper editor. It was so much fun they decided to do it again - and again! Over the following 10 years additional events were added and it became a two-day Festival. With the vision and effort of the voluntary organising committee as well as the support of Parkes Shire Council, the Festival exploded in popularity and word quickly spread across Australia of the fun and unique event in regional NSW.

Following its tremendous success, in 2014 the Festival transitioned management to Parkes Shire Council under a Section 355 Festival Committee. The Festival now regularly attracts visitors from all around Australia and stages more than 120 events annually. In January 2015, Parkes Elvis Festival was officially endorsed by Elvis Presley Enterprises, Inc., the trustees of the estate of Elvis Presley. Official endorsement elevates Parkes Elvis Festival to the ranks of premiere Elvis tribute festivals in the world.

Parkes Elvis Festival is proudly supported by the NSW Government through its tourism and major events agency, Destination NSW.