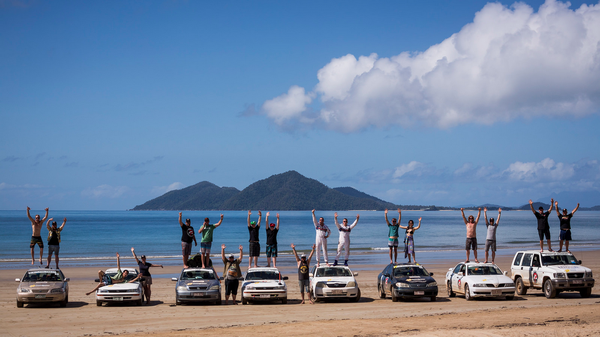 This November 75 teams from all over Australia will drive off into the unknown for five days of adventure.

Departing Sydney on 28 November, Mystery Box Rally will take to the road as 150 participants farewell the Sydney Opera House, Harbour Bridge and the city mayhem of George Street, as they explore some of the most picturesque and unique country landscapes in Australia. It is a road trip to rival the world's greatest drives and all whilst raising much needed funds for cancer treatment and research.

Alongside the musical odyssey of Highway 61, USA and the endless expanse of the largest salt lake Salra de Uyuni, Bolivia, Mystery Box Rally promises a once in a lifetime adventure but with one substantial difference. As the name suggests, it's all in the mystery of the drive.

The first of the mysteries is of course the route. Participants arrive not knowing where they are headed or how they will get there, only that in five days time they'll complete their round trip. Destinations and routes are kept secret with the daily route revealed to the teams just before they drive off each day. From the rolling beaches of Sydney, the teams will experience just how vast Australia is, driving along outback dirt roads and parched red desert, through winding lush valleys and majestic small towns.

The next big mystery the participants will encounter, is their mystery box that will take them there. With no knowledge of the vehicle or what's under the bonnet, teams will bid on their dream car at a private auction the night before the rally starts. All of the vehicles for the rally are owned and provided by Manheim Auctions Australia, who ensure they are registered, roadworthy and ready for an adventure. From small hatchbacks to large station wagons, it's the luck of the draw for what will be driven out next. The amount of 'money' the teams have to bid with is based on their fundraising total, so the more they raise the better their chance of securing their 'dream' mystery box.

By sourcing the cars, Mystery Box Rally takes the hard work out of teams finding a suitable vehicle, getting it road ready and transporting it to the start of the rally. As well as finding the car, the rally also places teams into buddy groups with support vehicles along the way to help keep their vehicle alive. After all, just like it's big brother, Mystery Box Rally is not a race but a fun and unique adventure with like-minded individuals.

As James Freeman, Founder of Box Rallies explains, “Participants don't need to know anything about cars or how they work.”

“Best mates, siblings, work friends, partners – anyone and everyone can get involved. By taking the hard work out of the rally it means teams can focus on what's really important – the fundraising,” he says.

Over the last three years, participants have rallied together to raise a combined total of $798,000 for vital Cancer Council research programs. This November, teams hope to raise a further $350,000 in the fight against cancer.

The November rally will not only take the fundraising total for Mystery Box Rally over the $1 million milestone, but it will also mark the 10th route of Box Rallies. Together with its big brother Shitbox Rally, over the past six years Box Rallies has raised more than $6.9 million, continuing to be the largest private fundraiser for the Cancer Council.

Mr Freeman says, “Mystery Box Rally is a great way for anyone to get involved in raising much needed funds for cancer research. This rally marks a milestone in the Box Rallies family and the 10th route is testament to all of the hard work the teams do in achieving their fundraising goals. The rally is really the reward for all the fundraising the teams do and brings together every part of a truly great road trip – experiencing the outback with spectacular scenery, new life-long friends, laughs and memories.”

Mystery Box Rally is perfect for those who crave adventure and embrace mystery. This boutique rally sees teams of two driving over five days to destinations unknown, all to raise funds for much needed cancer research and treatment.  This fly in fly out rally takes care of sourcing the cars so teams can focus on what's important - the fundraising.

Teams will find out what car they will be driving at a private auction the day before the rally. The amount of 'money' they have to bid with is based on their fundraising total, so the more they raise the better their chance of securing their 'dream' Mystery Box. The next big mystery is of course the route, with teams told each morning where they will be driving that day. The itinerary promises participants a trip of a lifetime, taking them through some of the most incredible landscapes this country has to offer, as well as outback dirt roads and majestic small towns.

Mystery Box is part of Box Rallies, founded by James Freeman, after he lost both his parents to cancer within 12 months of each other. Described as the mad baby brother of Shitbox Rally, also a Box Rallies initiative, Mystery Box is a reward for all the fundraising teams do prior to the event and is a chance to meet like-minded people. It also offers a unique way to see our vast and beautiful country. To qualify for the Mystery Box Rally, supporters must have raised a minimum of $3,000.

In 2013 the inaugural Mystery Box Rally saw teams travel through remote parts of New South Wales and country Melbourne. Taking in the sites of Hay, Echuca, Deniliquin, Willandra, White Cliffs, Tibooburra (one of the most remote towns in NSW), Wentworth, Mildura before finishing in Melbourne. Teams taking part in 2014 set out to secret locations across Queensland and New South Wales. Taking them from Brisbane to Hebel, the most north-west town in NSW at Tibooburra, Hungerford, St George and the most western winery in QLD, and back to Brisbane. Earlier this year, teams further discovered the remote small towns of Queensland. In August, teams travelled from Townsville to Richmond, Normanton, Chillagoe and Mission Beach via Port Douglas before heading back to Townsville.