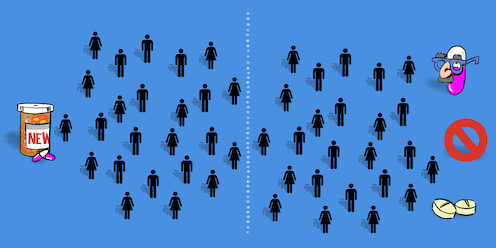 Randomisation is the only commonly accepted method of ensuring an unbiased estimate of the treatment effect.The Conversation/Wes Mountain, CC BY-ND

When a new treatment becomes available for a particular health condition, such as a new medication to treat a disease, it’s tested to see whether it’s effective for its intended purpose. It’s also tested for potential side effects. This is done through a series of human trials, known as clinical trials.

Every day hundreds of people are invited to participate in clinical trials to test new treatments. Clinical trials are conducted across four phases, from early studies to test the treatment’s safety in a small group of people (phase one), to much larger studies testing whether the treatment works in patients (phases three and four). People are invited to participate in all of these phases.

Read more: how do drugs get from the point of discovery to the pharmacy shelf?

Once a new treatment is found to be safe (in terms of having acceptable side effects) in the first two phases, it’s assessed for whether it is beneficial to patients compared with the standard treatment for that condition (phase three). This information can then be used to change clinical practice.

The best way to compare a new treatment to the standard treatment is in a randomised controlled trial. In such a study, participants are randomly allocated to either the new or standard (control) treatments using the computer equivalent of tossing a coin. This process is known as randomisation and is the only commonly accepted method of ensuring an unbiased estimate of the treatment effect.

This confusion of effects is known as confounding, and randomisation is used to overcome it. In randomised trials, treatments are randomly allocated to the trial participants, so each individual has the same chance of receiving the new or standard treatment. Randomisation ensures the the people in each group have a similar distribution of characteristics to make sure that the groups are comparable - so if one group has better outcomes than the other, it can be attributed to the interventions being tested.

Randomisation is therefore critical to make direct comparisons between the treatments. It is also important that the treatment allocation is concealed from both the patient and doctor before the patient joins the study so that this cannot influence the decision for the patient to take part in the study.

The presence of a control group is important to understand what happens to similar patients who undergo the same procedures as in the other group(s), but in the absence of the new treatment. 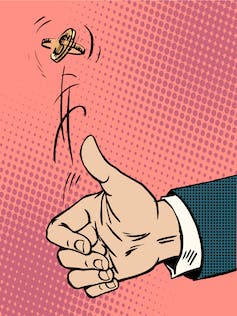 In most trials, participants have a 50% chance of receiving either of the two interventions.from shutterstock.com

Ideally in a randomised controlled trial, the treatment is masked from the patient and the medical staff treating the participant. This is known as blinding.

Why agree to be in a trial?

This state of not knowing which treatment is best is known as clinical equipoise, and means that no participant in a trial is knowingly getting an inferior treatment. This also applies when the control group receives a placebo, as it may be that the treatment does not have any benefit for the patient but may have unwanted side effects.

Read more – Risks vs rewards: why people with HIV volunteer for ‘cure’ research

The advantages of taking part in a randomised trial are that you may receive a treatment that is better than standard care, and that you are often more closely monitored than under routine care outside of the trial setting.

For some health conditions, participating in a clinical trial provides the only chance to receive a potentially beneficial treatment that may take years to become commercially available. An altruistic advantage is that the results of the trial will be used to guide clinical practice that will benefit patients in the future.