The federal government has announced over a dozen changes to private health insurance.from shutterstock.com

Australians will be able to choose lower premiums for higher excess, and insurers required to more clearly categorise their policies, under the federal government’s shake up of private health insurance announced today.

The package of more than a dozen changes to the sector is designed to help reduce costs to government in the medium term and establish processes to identify further reforms in the longer term. The dominant strategy here is to draw more young people into buying health insurance.

Read more: A snapshot of private health insurance in Australia

But these changes are unlikely to lower premiums in the long run. The value proposition for the funds relies on them getting young people who don’t use health care much, to pay for a product they are unlikely to use.

Customers will be given the option to increase their excess limit if they want to pay a lower premium. The maximum excess for singles is currently A$500 - that will be lifted to A$750. Families will be able to increase their limit from A$1,000 to A$1,500.

Fulfilling an election promise, the government is requiring private health insurers to label their package, so it’s clear what’s in and what’s out. Gold products will cover everything, Silver will have a deductible (excess), Bronze will have exclusions (packages where some conditions, such as orthopaedics or obstetrics aren’t covered) and Basic, well, who knows. No details about combinations and permutations have been announced.

So, unfortunately, we should expect further product differentiation, and perhaps a quick return to the same choice overload of policies we have today. 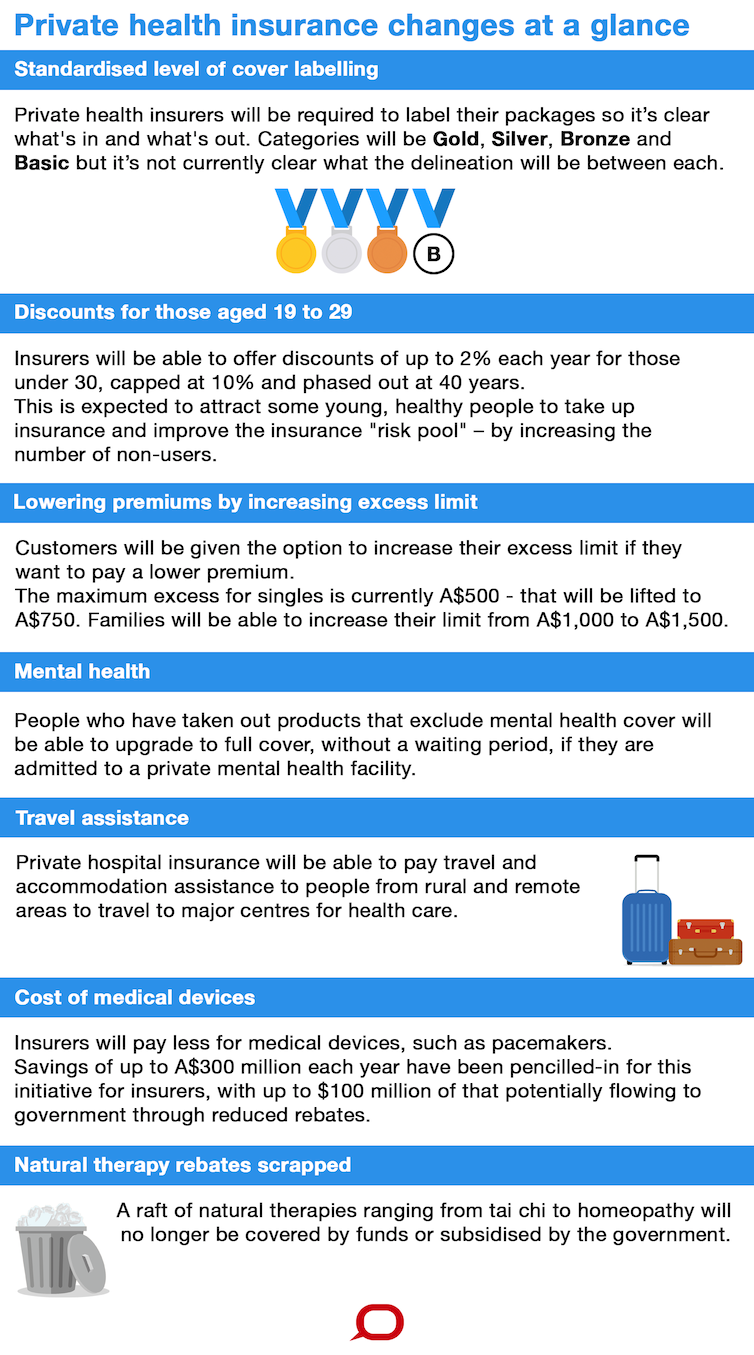 Insurers will now be able to offer discounted products to lure people aged between 19 and 29 into health insurance. Discounts of up to 2% for each year before 30 may be on offer, capped at 10% and phased out at 40. This is expected to attract some young, healthy people to take up insurance and so improve the insurance “risk pool” – by increasing the number of non-users. In theory at least, this should be a net benefit in terms of costs, despite the discount.

In a small boost for private mental health providers and consumers, people who have taken out products that exclude mental health cover will be able to upgrade to full cover, without a waiting period, if they are admitted to a private mental health facility. But this is a tokenistic change that has all the hallmarks of a back-room compromise to avoid a serious reform, such as banning mental health exclusion clauses.

Private hospital insurance will now be able to pay travel and accommodation assistance to people from rural and remote areas to travel to major centres for health-care. Presumably each fund will choose their offerings, which will mean further complexity for people trying to work out the trade-offs between different insurance offers.

Savings for insurers and government

Firstly, a raft of natural therapies ranging from tai chi to homeopathy will no longer be covered by funds or subsidised by government. Although popular with some consumers, the health benefits of these services is rarely proven. So they were never a good fit in an insurance scheme which has a hefty taxpayer subsidy.

Secondly, rebates for prostheses will be reduced. The payment rates claimed by private hospitals and device manufacturers – and paid by insurers – have been significantly higher than prices paid by public hospitals. Savings of up to A$300 million each year have been pencilled in for this initiative for insurers, with up to A$100 million of that potentially flowing to government through reduced rebates.

But whether these savings will be achieved is an open question. Private hospitals may simply look to replace lost profit on prostheses with increased bed day charges, which will make negotiations between funds and private hospitals over payments that much more interesting.

One savings opportunity for health funds that hasn’t received much attention is a move to improve the evidence base for some hospital interventions insurers pay for. This initiative, addressing so called low-value care, will initially focus on the burgeoning rehabilitation and mental health services provided by private hospitals.

The evidence about the value to consumers of bed-based compared to home rehabilitation is weak, but the profits to private hospitals can be large. As Grattan Institute has previously argued, strengthening insurers’ powers to question the growth of these services is long overdue.

The big winner from the changes is a 25-year-old, living in a small rural town, who already has health insurance. They could get a 10% discount and improved benefits. But of course, few Australians fall into this category. And whether a 10% discount is enough to increase health insurance take up by young people, many of whom are in precarious employment arrangements or unemployed, is a question for the marketeers. 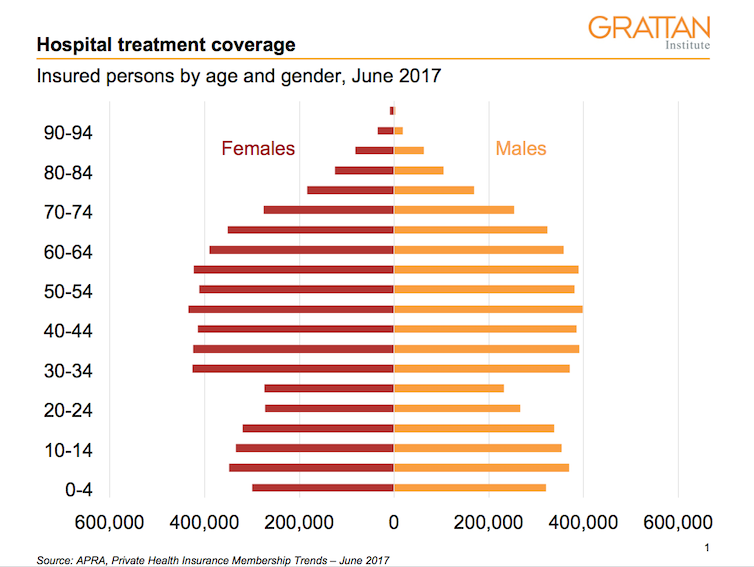 To the extent that young people are attracted into health insurance, and private hospitals don’t find some way to wrangle increased bed day charges out of the funds to replace losses in prostheses, health insurance payouts will go down. This will benefit all those with insurance by slowing the rate of growth in premiums.

Premiums have gone up at more than twice the rate of inflation over the past few years. And they will probably still increase at rates significantly more than inflation into the future, despite those announcements.

The new arrangements have been designed in close cooperation with the private health insurance industry, and so, not surprisingly, have been welcomed by them. The share prices for stock-exchange listed insurers are expected to increase. However, the hype associated with the announcement is probably not warranted.

The changes will provide some stability for the industry, and they may help consumers make better-informed choices. But the changes will probably slow growth in health insurance premiums only marginally, perhaps by 1% year. And people will still probably drop or downgrade their cover while wage growth remains anaemic and family budgets are under pressure from rising electricity prices.

The government and the insurers are obviously hoping this Friday the 13th will be their lucky day, and that Australia will at last have a healthier private health insurance industry.

We should believe it when we see it.

Stephen Duckett has private health insurance. Grattan Institute began with contributions to its endowment of $15 million from each of the Federal and Victorian Governments, and $4 million from BHP Billiton. In order to safeguard its independence, Grattan Institute’s board controls this endowment. The funds are invested and Grattan uses the income to pursue its activities