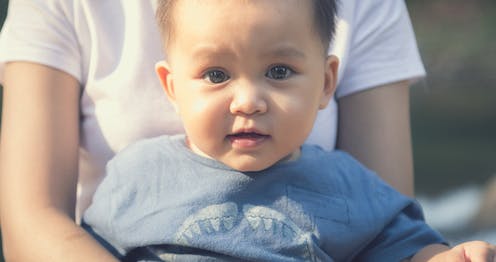 Children aged under two are at increased risk of meningococcal disease.Shutterstock

As a medical researcher and parent of two teenagers there is one bug, Neisseria meningitidis, that really scares me. This is mainly because of the speed and severity of the infection it causes, called meningococcal disease, and its predilection for infecting healthy adolescents and younger children.

Meningococcal is a rare but very serious infection that can lead to blood poisoning (septicaemia) and/or brain infection (meningitis).

The initial symptoms can be vague and non-specific. This includes the sudden onset of fever and a rash. The rash can be either red-purple spots or bruises – detected by the classic pushing-a-glass-on-the-skin test to see if the rash goes away (and is therefore less likely to be meningococcal) – or a flat or raised non-specific rash.

Read more: What’s meningococcal meningitis and what are the signs?

Other symptoms can be mistaken for disease like the flu and include headache, neck stiffness, reduced consciousness, muscle aches, joint pain, nausea and vomiting. If you are at all worried see your GP. 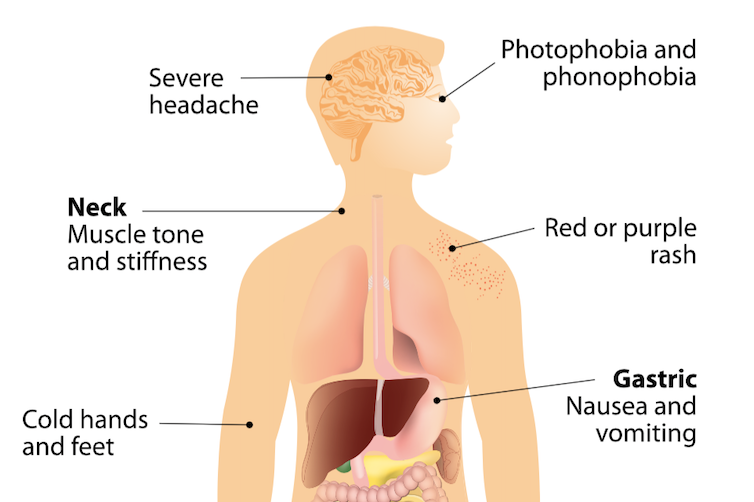 Symptoms of meningoccal disease can be vague and non-specific, or mistaken for other illnesses.Shutterstock

Once infected the death rate is around 5–10%. About 10–30% of children and adolescents who survive the disease can develop permanent complications, such as limb deformity, skin scarring, deafness and neurological deficits.

Early diagnosis and treatment with antibiotics can improve the patient’s outcomes but the disease can largely be prevented by vaccination.

How common is meningococcal disease?

Using differences in the surface “sugars” (polysaccharides) of the Neisseria meningitidis organism’s outer membrane capsule, we are able to classify the bacteria into serogroups (types), and each serogroup is given a letter of the alphabet, for example, A, B, C and so on. There are 13 different serogroups.

Globally, most meningococcal disease is caused by serogroups A, B, C, W and Y. These were chosen as the targets for vaccines.

The bug poses the greatest risk of infection in those people with immune system weaknesses. But healthy people in our community who are smokers, live in crowded living conditions, engage in intimate kissing with multiple partners (hence adolescents and young adults), and those with a recent or current viral respiratory infection are also targets.

Read more: Which vaccinations should I get as an adult?

The burden of meningococcal disease fluctuates naturally over time. The rate declined from 2002 to 2013, but has been on the increase since 2014.

Serogroup C disease has become very rare (accounting for only 1.2% of cases in 2016) since the introduction of a free vaccine in 2003.

Serogroup B disease has been dominant until recently, but has been naturally declining in most states and territories, even without widespread vaccination against this serogroup.

Serogroup W disease has increased since 2013. This is now the main cause of meningococcal disease in Australia, accounting for 44.7% of cases in 2016.

Children aged under two years have the highest rates of meningococcal W and Y disease, followed by older adolescents.

No single vaccine offers protection against all serogroups that cause meningococcal disease, but there are safe and effective vaccines that can protect against five serogroups (A,B,C,W,Y). The vaccines cover different serogroups and it does get confusing so here are the basics.

There are three types of meningococcal vaccines registered in Australia, which cover the following serogroups:

All these vaccines include “killed” parts of the bacteria in order to stimulate an immune response. This means if someone comes into contact with the bacteria, for example via kissing, then they already have immunity and don’t get the nasty disease. It’s not possible for the vaccine to cause meningococcal disease.

The MenC vaccine is given for free to all Australian infants at 12 months of age under our National Immunisation Program. It’s given as a combination vaccine with the trade name Menitorix® and protects against meningococcal C and another bacteria called Haemophilus influenzae type b.

The MenC vaccine has reduced the rate of meningoccocal C by 96% since its introduction.

Although serogroup C disease is now not common, it’s not completely eradicated so get your child vaccinated at 12 months.

The MenB vaccine, which has the trade name Bexsero®, is not on the national immunisation program and will cost you around A$95-150 per dose, depending on what your pharmacist or GP charges. It might be worth calling a few different pharmacies to check their price.

It’s strongly recommended for people who either have immune system weaknesses, work in environments where there’s a high chance of exposure (such as health care or laboratory workers), or live in close proximity to others (such as military recruits and those in boarding houses or residential accommodation).

Children, especially those aged under two, and adolescents aged 15 to 19 years are also at increased risk.

Read more: More reason to use Meningococcal B vaccine – it could also cut the Clap

The younger you start the MenB vaccine the more doses you need. If starting between six weeks to five months old, the child needs three doses; if over six months old, then two doses. Adolescents only need one dose.

Infants should be given a medicine like paracetamol at the time of vaccination to reduce the chance of the vaccine causing a fever.

Three vaccines are available in Australia, which have the trade names of Menveo®, Menactra® and Nimenrix®.

Like the MenB vaccine, the number of doses needed depends on the age you start vaccinating (babies under six months need four doses; 7- to 11-month olds need two doses and 12-23 month olds need one or two doses (either one dose of Nimenrix® or two doses of Menveo®); and if started over two years, the child only needs one dose). Menveo® is the only vaccine registered for use in babies under one.

In all states except South Australia (where a MenB program is currently underway), MenACWY will be given to adolescents in years 11 and 12 via high school-based programs. This is in response to the recent emergence of MenW disease around parts of the country.

Parents wanting to vaccinate younger children will have to pay around A$55-90 per dose, depending on the brand you choose and what your pharmacist and GP charges. (Again, different pharmacies may have different prices).

What should you get?

The inevitable question parents ask is, “should I pay to get my child vaccinated against MenB and MenACWY?”

In an ideal world, the answer would be “give both vaccines”. If you or your child has immune system weaknesses then definitely go for both optional vaccines.

Another way to answer would be to state what we know. We know both vaccines are effective against severe disease. We know they can be given on the same day safely. But we also know no vaccine is 100% effective, and a person may still become infected even after immunisation.

If you are very worried your child may have meningococcal disease, whether vaccinated or not, seek medical advice immediately.

Nicholas Wood receives funding from the NHMRC. The CHildren's Hospital at Westmead has had GSK support for investigator-initiated studies in the past.