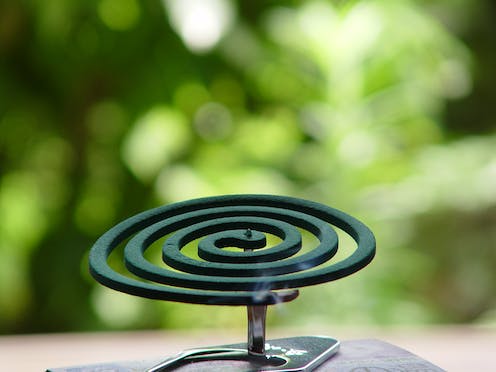 Some experts have likened burning a mosquito coil in a closed room to smoking 100 cigarettes. By trini, CC BY 2.1 jp

The sight and smell of smouldering mosquito coils is a mainstay of summer. But is all that smoke really keeping away the swarms of mosquitoes, and is breathing in the smoke worse than mosquito bites for our health?

The burning of aromatic plant material to keep away swarms of mosquitoes is an integral part of many cultural traditions around the world. But it wasn’t until the early 1900s that the distinctively shaped mosquito coil was born, thanks to Japanese entrepreneurs Eiichiro and Yuki Ueyama and their katori senk (mosquito-killing incense).

While traditional coils and sticks were made from a pyrethrum paste, modern mosquito coils mostly contain either pyrethroid insecticides or plant-derived substances such as citronella. They’re cheap, portable and generally effective at reducing mosquito bites, but do they actually reduce the risks of mosquito-borne disease?

Mosquito coils contain a mix of substances. Along with the products that deter mosquito biting, there are also products that hold the coil together and enable it to smoulder slowly.

Mosquito coils work in one of two ways. Those that contain insecticides will kill (or at least “knock down”) mosquitoes, while those that contain aromatic substances (such as citronella) will repel mosquitoes or reduce the likelihood they’ll bite.

Mosquito coils and their role in killing or repelling mosquitoes has been well studied. Despite differences between the chemical constituents of products and the ways in which they are tested, they will generally reduce the ability of mosquitoes to bite people.

The problem is, less nuisance-biting by mosquitoes is good but when there is a risk of disease, you need to stop all mosquito bites. Are mosquito coils doing enough?

Mosquito-borne pathogens kill more than half a million people a year and make hundreds of thousands of people sick. Malaria is the worst of these, with recent reports from the World Health Organisation suggesting the steady improvements in the burden of disease are slowing, and the situation may even be getting worse.

To prevent public health risk associated with mosquitoes, most people have to rely on “covering up” with long-sleeved shirts and long pants, sleeping under bed nets, applying topical insect repellents or burning mosquito coils. 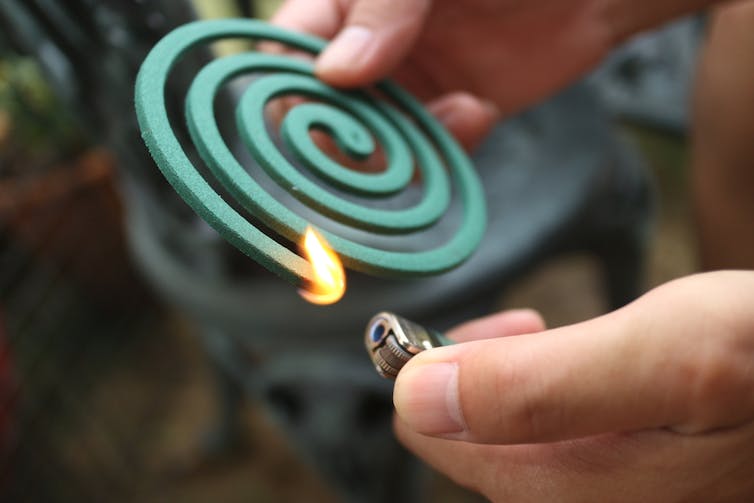 No links have been found between mosquito coils and lung cancer.from www.shutterstock.com

There’s growing concern about the adverse health impacts associated with the burning of mosquito coils and sticks indoors. The insecticide products used are generally considered safe, but it’s the particulate matter produced from a smouldering mosquito coil that poses the greatest risk. Is it correct to conclude “burning one mosquito coil in a closed room amounts to smoking roughly 100 cigarettes” as some have claimed?

The link between smoking cigarettes and poor health outcomes is clear. What about mosquito coil smoke, especially if there’s almost daily exposure, as there is in some countries?

One study estimated the particulate matter produced from burning one mosquito coil was equivalent to burning 75-137 cigarettes. This amount of exposure poses a health risk, but there is a lack of clear evidence that the long-term exposure to mosquito coil smoke increases the risk of more serious health impacts such as lung cancer. In the face of this uncertainty, the key message should be to avoid prolonged exposure, especially in enclosed spaces.

In Australia, all products that purport to kill or repel mosquitoes must be registered by the Australian Pesticides and Veterinary Medicines Authority. Check the packaging for a registration number. There are dozens of variations on “mosquito coils”, including sticks, coils, candles and a variety of “smokeless”, plug-in devices. Fortunately, some of the more dangerous chemicals found in mosquito coils are not used in products produced and sold locally in Australia.

There’s enough evidence to show that when used outdoors, burning a mosquito coil will assist in reducing mosquito bites, but should be used judiciously. Using them in combination with topical insect repellents probably provides the best protection. Their use in closed rooms is best avoided – “smokeless” devices are worth considering as an alternative.

Recently, consumer products have been made available in Australia that contain the insecticide Metofluthrin, an insecticide shown to hold great potential for managing mosquito-borne disease. Products of this nature are better suited to indoor use than mosquito coils so may be important in controlling outbreaks of disease.

They also may help knock off that one stray mosquito in the bedroom whose annoying buzz is keeping you awake at night.