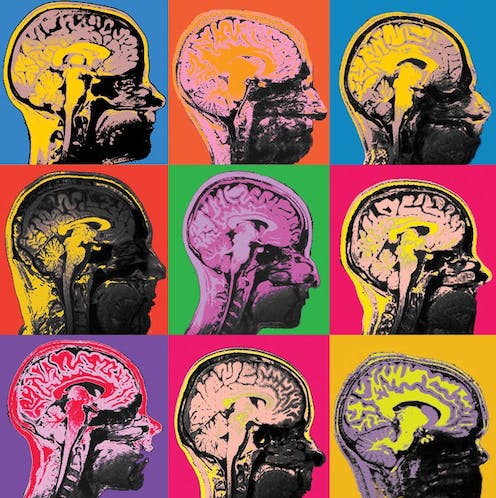 To understand how the healthy brain works and what occurs in brain disease, neuroscientists use many microscopy techniques, ranging from whole-brain human MRIs to imaging within a single neuron (brain cell), creating stunning images in the process.

Here are a selection of the best and brightest produced by scientists at the Queensland Brain Institute at The University of Queensland in 2017. 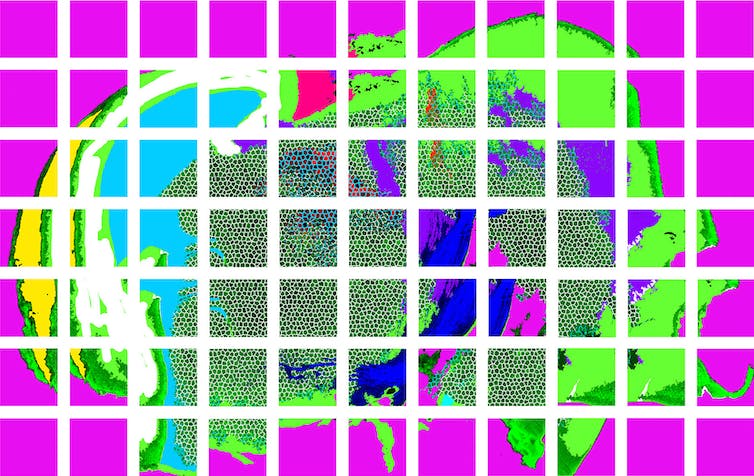 This is a side view of a mouse embryo’s brain. The axons of neurons (dark blue) that release dopamine, a neurotransmitter involved in reward and pleasure, grow towards their target brain regions. 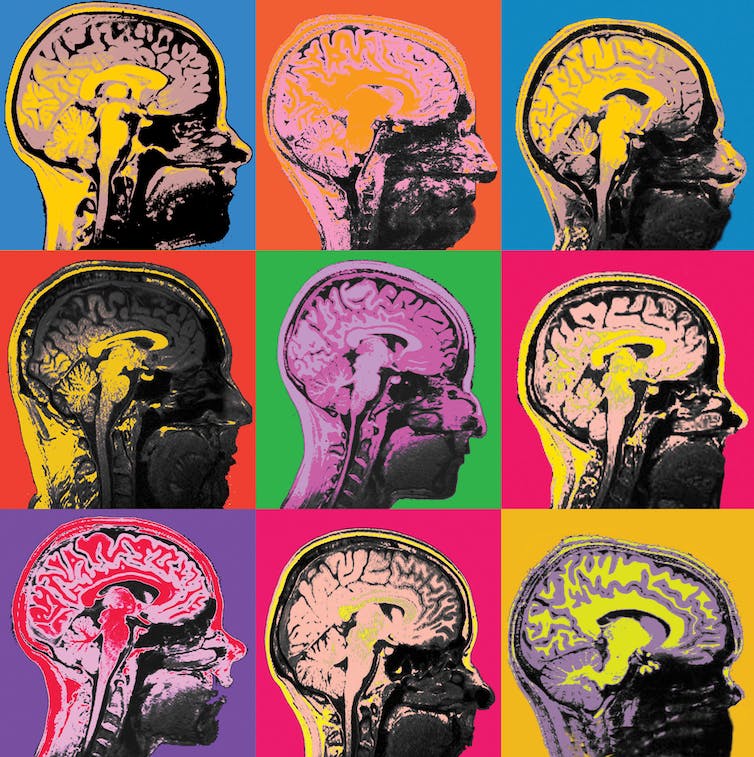 As neuroscience becomes increasingly of public interest, researchers are striving to make their findings accessible, with parallels to the pop art movement. These are MRI images of the human brain. 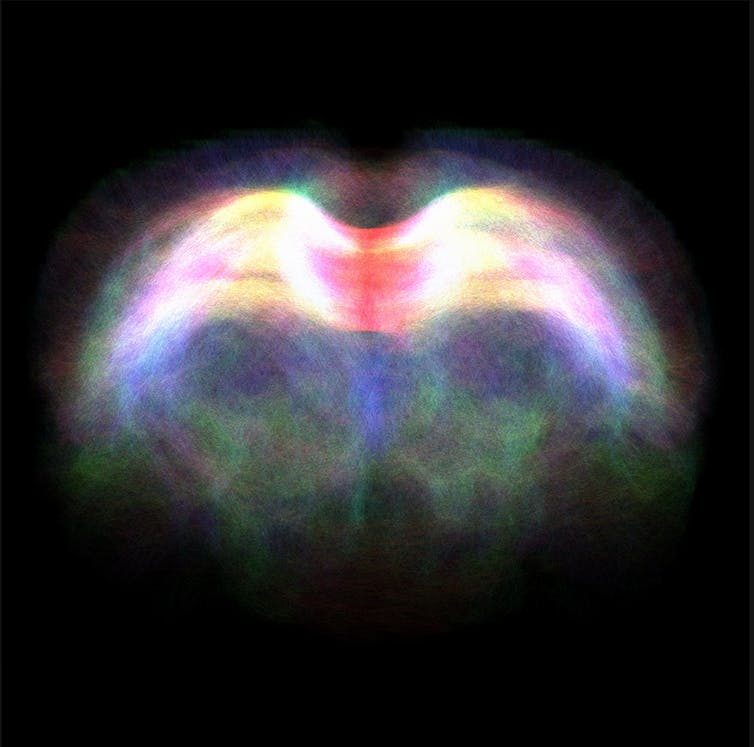 This image shows diffusion tensor imaging, an MRI-based neuroimaging technique, revealling the fibre tracts through the corpus callosum in a rodent brain. The corpus callosum links the brain’s left and right hemispheres to each other. The colours represent the different directions that the tracts are travelling through the brain.

The colourful image below shows the nanoscale movements of individual molecules that are critical in mediating communication between neurons. Knowing how these molecules are organised, and how they move, is at the heart of understanding the brain in health and disease. 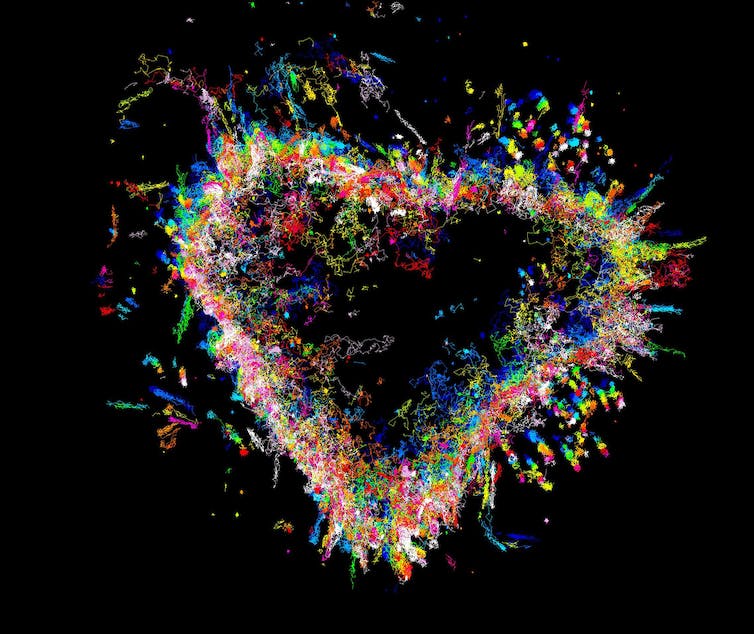 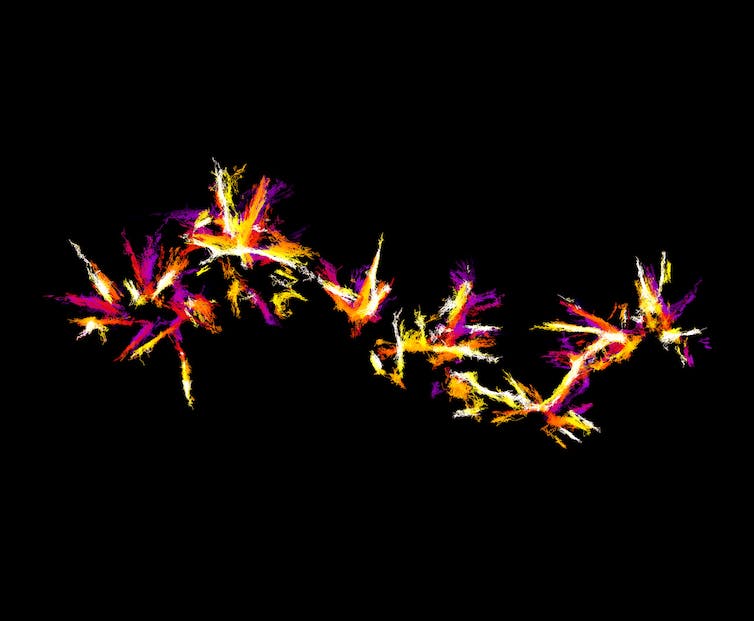 They may look like fireworks, but this image shows nanoscopic movements of single actin molecules. Actin is an essential protein found in all cells of plants and animals, in this case, a neurosecretory cell, a specialised type of nerve cell that releases message molecules into the blood. 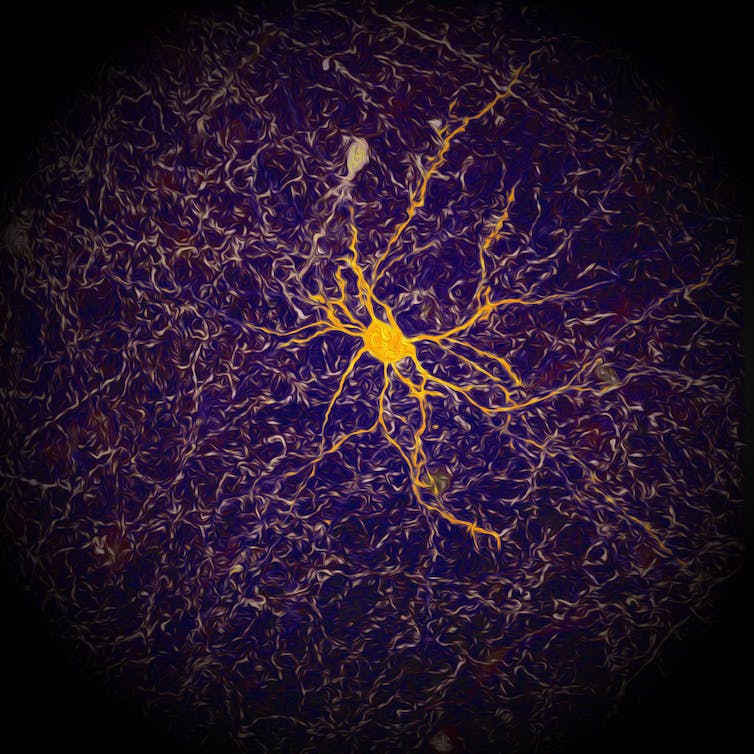 This image shows the activity of a single neuron (gold) in the brain region the cortex, recorded after the surrounding neurons (cream) are activated with a flash of light. 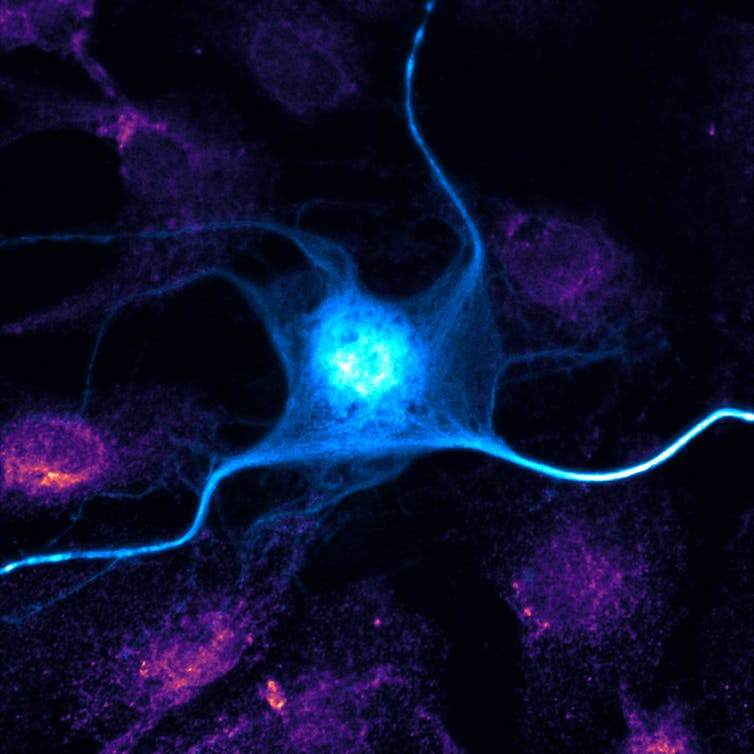 The blue neuron, which could be a manta ray atop a coral reef, expresses a protein tagged with a fluorescent marker. The pink of surrounding cells is formed from endoplasmic reticulum, a cell structure important for processing and transporting proteins. 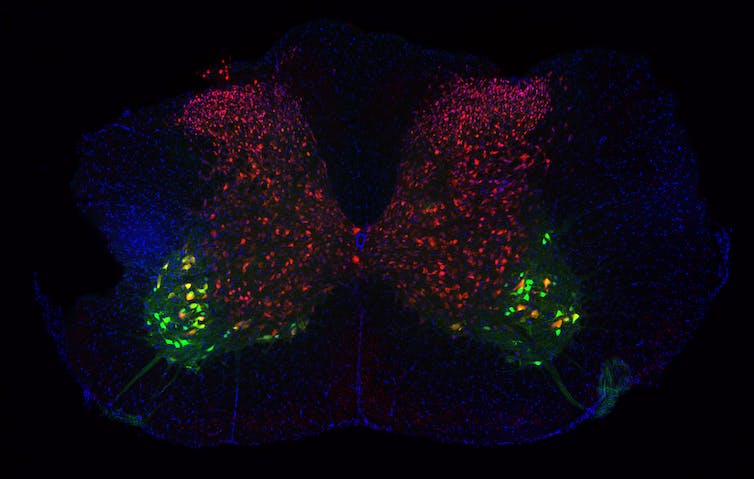 This section of a mouse spinal cord shows a diversity of neuron types. The smaller neurons in pink are involved in pain and the large green neurons are involved in movement.

The organisation of neurons in the hippocampus, a brain region important for learning and memory, looks like a forest in snow. The “snow” is made of cell nuclei, which contain each cell’s genetic material. The “trees” are the neurons’ projections, along which electrical signals travel to enable communication with other cells.

The brain in disease 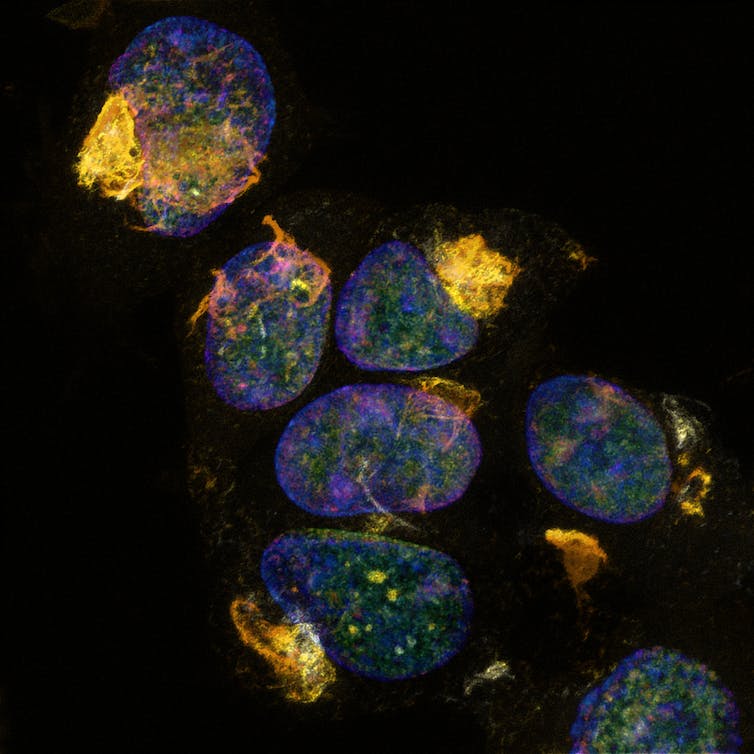 In Alzheimer’s disease, tau protein (gold) becomes toxic as it builds up. It’s hard to believe these mesmerising, gem-like clusters can be so destructive. 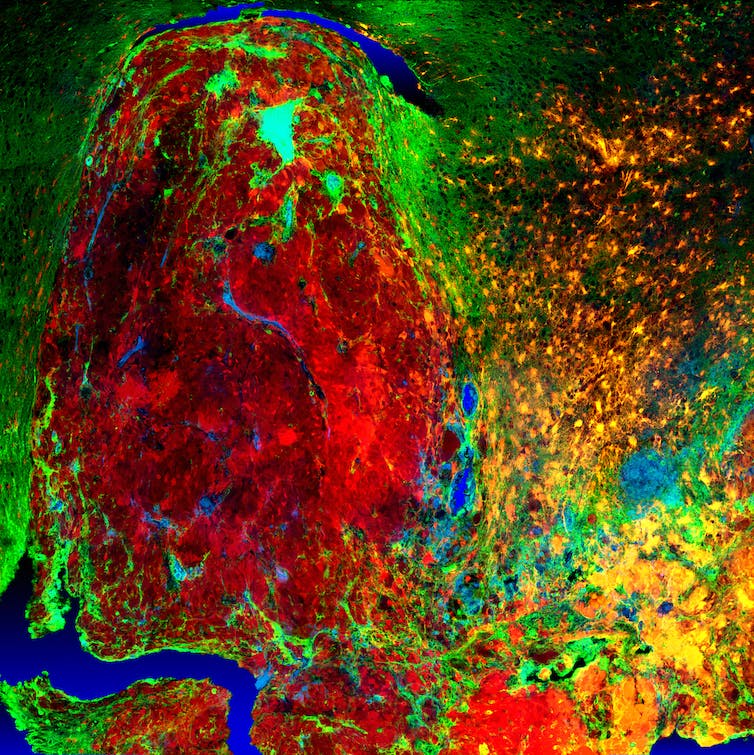 Understanding the characteristics of high-grade brain tumours is crucial to finding treatments for disease. High-resolution fluorescent imaging allows us to investigate how the normal brain cells become cancer cells and how they behave. This image demonstrates the infiltration process of the cancer cells (red) into the normal brain tissue (green). 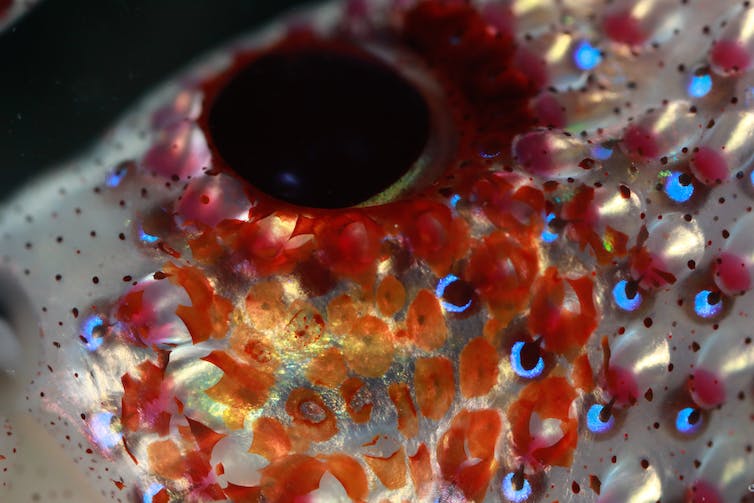 Deep-sea creatures, including this jewel squid, emit their own light for defence, to attract prey, and even to camouflage. At a depth of 600m, the bioluminescent flashes emitted from the light organs of the jewel squid are deadly attractive to prey. 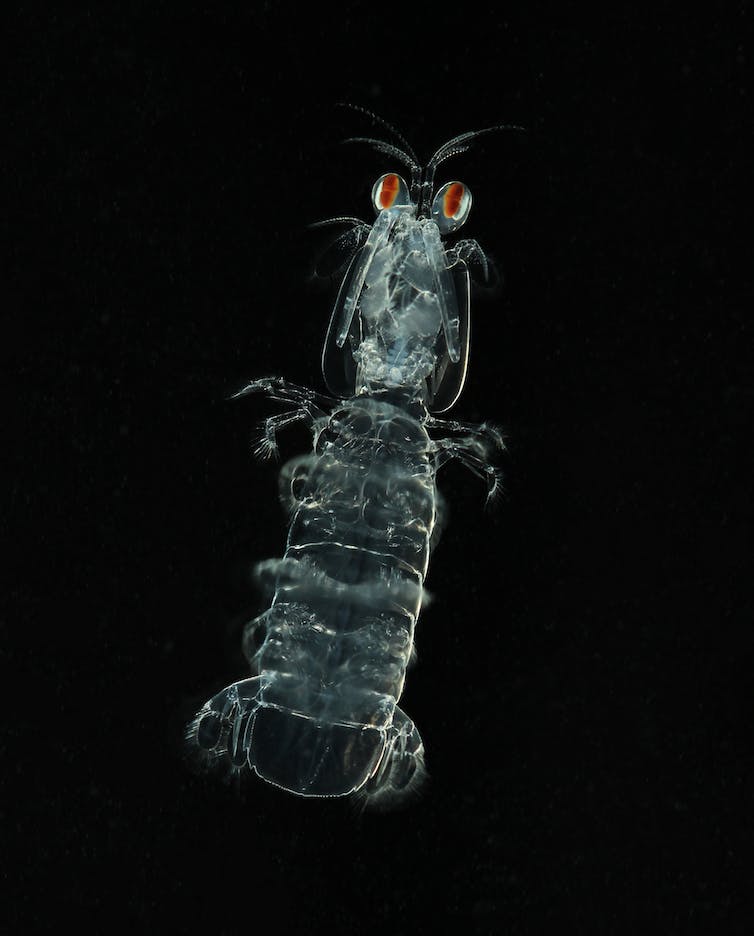 Two retinas are visible in each eye of this mantis shrimp. Mantis shrimp have the most complex visual system in the world; they can see visible and UV light, and can reflect and detect circular polarising light, an extremely rare ability in nature. 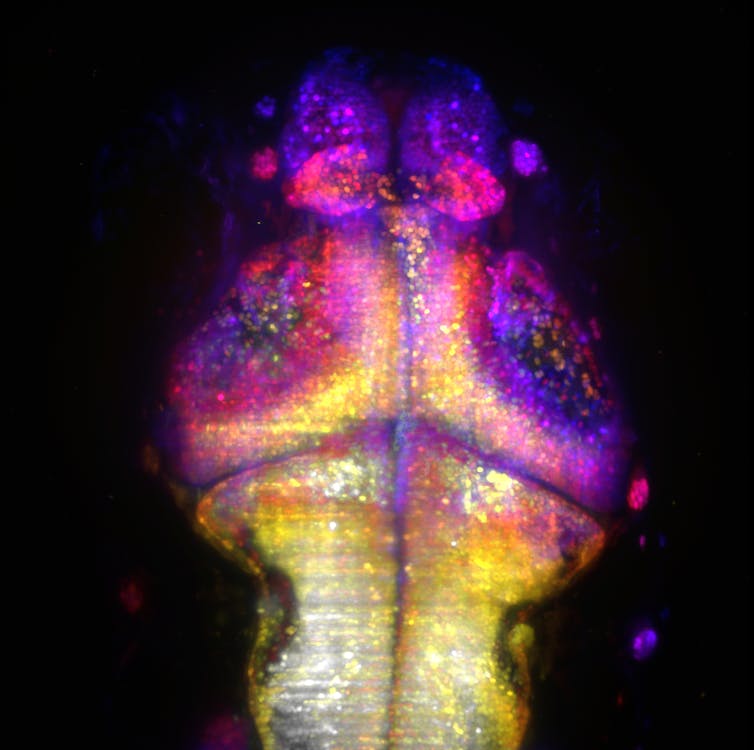 These are neurons firing in the brain of a one-week old zebrafish, recorded in 3D using a custom-built microscope and colour-coded for depth. Imaging activity in the brains of young zebrafish could lead to an understanding of how the brain is shaped for function. 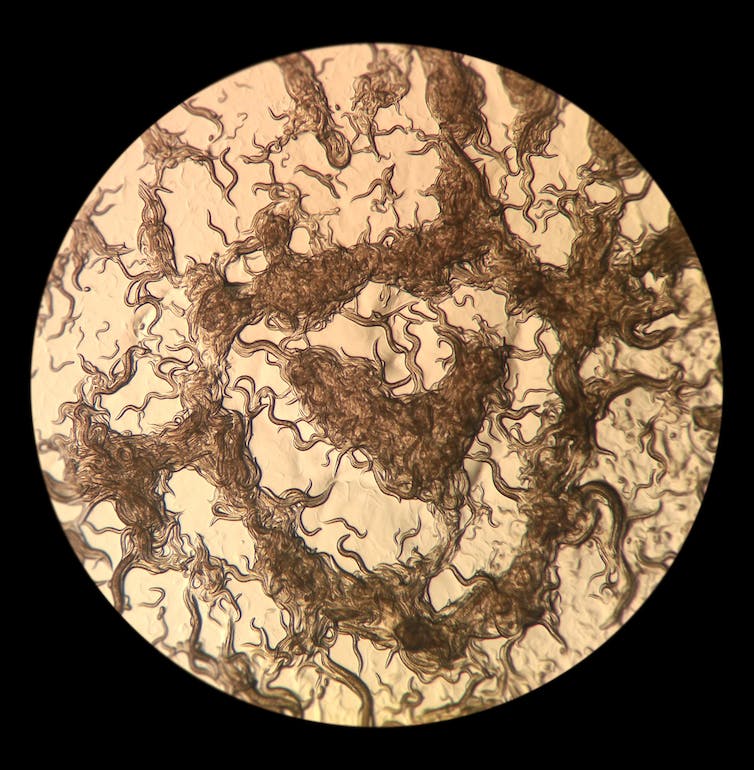 A dish of C. elegans roundworms at different stages of their lifecycle. C. elegans is a simple, semi-transparent organism, making it an ideal model for researchers to study the nervous system.

The authors do not work for, consult, own shares in or receive funding from any company or organization that would benefit from this article, and have disclosed no relevant affiliations beyond their academic appointment.