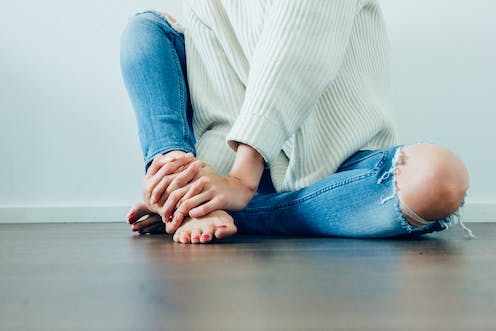 When it comes to managing endometriosis, what works for one woman many not be the best choice for another. Imani Clovis

Between 1% and 10% of Australian women have endometriosis, a condition where the tissue that normally lines the uterus, the endometrium, grows outside the womb.

There is typically a delay of six to seven years between first symptoms and diagnosis of endometriosis. The disease is most commonly progressive, so if women have symptoms and it goes untreated, it may grow and worsen.

The only way to definitively diagnose endometriosis is through key-hole surgery or laparoscopy, where a surgeon examines the pelvis for signs of the disease. This invasive procedure requires general anaesthesia and hospitalisation.

Many women with period pain, especially adolescents, who could have endometriosis but don’t have a (laparoscopy-confirmed) diagnosis are prescribed the pill to reduce their pain. These women may only be diagnosed with the disease once they stop taking the pill and their symptoms return or increase.

While early diagnosis is ideal, endometriosis is thought to be less likely to progress while women are taking the pill, making a delayed diagnosis less worrying.

But when it comes to managing endometriosis, not all contraceptives are equal. And what works for one woman many not be the best choice for another.

Most women experience “retrograde menstruation”, when menstrual blood and endometrial cells move back up the fallopian tubes and into the abdomen. In women with endometriosis, the endometrial cells attach to pelvic or abdominal organs – including the ovaries, bladder and bowel – and start to grow.

During menstruation, these “rogue” endometrial cells form lesions that bleed in the same way as the lining of the uterus. This results in a vicious cycle of inflammation and scarring within the abdomen which causes infertility, painful periods, painful sex and persistent pelvic pain that lasts throughout the menstrual cycle.

Endometriosis can be difficult to diagnose, particularly in its early stages. While the disease is common, many women have painful periods that are not caused by endometriosis. The only way to tell for sure is to have surgery, which women are rightly reluctant to commit to unless symptoms become severe.

Pain from endometriosis can be treated surgically by removing the lesions. If it is all removed or destroyed, then 80% of women will experience improvement in their pain symptoms. Endometriosis will regrow in about one-third of women over the next five years, so multiple surgeries may be needed.

In women with infertility, there is almost a doubling of natural pregnancy rates after surgery for endometriosis.

Read more: Women aren’t responsible for endometriosis, nor should they be expected to cure themselves

An alternative approach is to use hormonal contraceptives to suppress menstruation or replace it with a milder version of menstruation, called a “withdrawal bleed”. Suppressing menstruation stops the lesions bleeding and prevents new endometrial cells reaching the abdomen.

The most common form of hormonal contraceptive is the combined oral contraceptive pill, which contains oestrogen and a progesterone-like hormone, progestin. The pill is safe to use in the long term, doesn’t cost much, is generally well tolerated, and also protects against pregnancy.

The combined pill is often prescribed as the first line of treatment, with the aim of reducing pain. If it controls symptoms (pain), then the assumption is that underlying disease is not progressing.

Withdrawal bleeds while on the combined pill are generally much lighter than regular periods. They don’t involve significant endometrial shedding, which in theory reduces the risk of endometriosis.

If the combined pill is taken continuously without the sugar pills, some women’s menstrual bleeds stop altogether. This can reduce or eliminate period pain and, hopefully, control the disease. 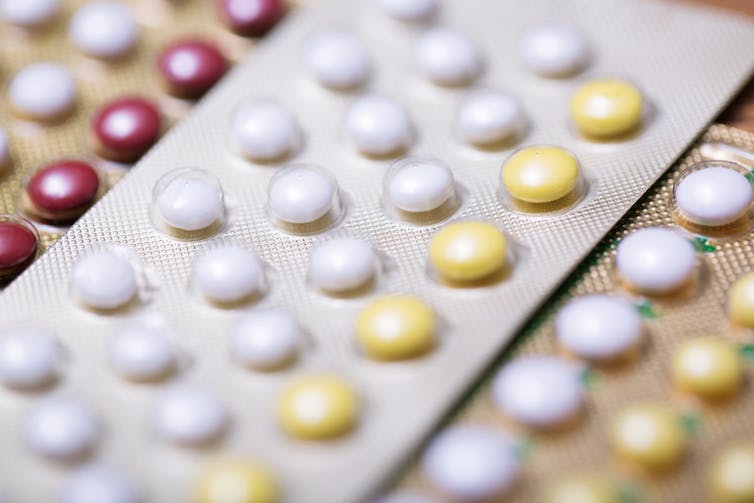 Some women are more affected by the side effects of the pill than others.Fongbeerredhot/Shutterstock

However, endometriosis is an oestrogen-dependent disease. So, taking oestrogen and having regular hormone exposure with monthly bleeds could result in ongoing pain symptoms and disease progression. If this is the case, progesterone-only pills are another option.

Progesterone-only pills such as Microlut, Provera, Dimetriose and Visanne contain progestin and no oestrogen. They suppress endometrial growth and often stop menstruation.

But they don’t suit everyone. Some women report significant side effects from progesterone-only pills, such as changes in mood, fluid retention (bloating, weight gain, breast enlargement), reduced libido, increased hair growth, oily skin and acne. The side effects vary, depending on the type of progestin, and the woman’s individual reaction.

Another option is the Mirena intra-uterine device (IUD), which releases progestins directly into the uterus. It is highly effective at stopping uterine endometrial growth and reducing menstruation.

A possible side effect is unpredictable bleeding and spotting, which some women find unacceptable.

What we don’t know

There is a shortage of good evidence-based science around the use of the pill to treat endometriosis symptoms. Much of what we know is based on an understanding of how hormones drive endometrial growth, coupled with practical clinical experience and observation.

Read more: Pregnancy doesn’t ‘cure’ endometriosis, so where does this advice come from?

We presume that long-term suppression of menstruation with the pill halts the progression of endometriosis. Unfortunately, a good clinical trial investigating this would be impossible to run since it would include doing laparoscopies on some women who don’t have symptoms, which would be unethical.

We also suspect, but don’t know for certain, that once significant scarring and damage has occurred due to ongoing disease, the pill is much less likely to be effective in suppressing symptoms.

If the pill is effective in controlling symptoms, women may only be diagnosed with endometriosis once they stop taking it. This creates a paradox whereby treating young women for their pain results in a delay in diagnosing the disease. But because endometriosis is less likely to progress while women are taking the pill, such a delay is less worrying than if the symptoms went unmanaged.

Ultimately, individual variability plays a large role in the symptoms women experience with endometriosis and the response to the various contraceptives available on the market. So it’s important to discuss the best course of treatment with your doctor.

You may need to shop around to find a GP or gynaecologist who specialises in treating endometriosis. Don’t be afraid to ask how much they know about the disease and their attitude towards various treatments to see if they’re the right fit for you.

Peter Rogers receives funding for endometriosis research from NHMRC and NIH. He is a Board Director for the Jean Hailes and acts as a consultant for Bayer AG.

Martin Healey does not work for, consult, own shares in or receive funding from any company or organisation that would benefit from this article, and has disclosed no relevant affiliations beyond their academic appointment.