Led by physicians, scientists and epidemiologists, the US Centers for Disease Control and Prevention (CDC) is one of the most reliable sources of knowledge during disease outbreaks. But now, with the world in desperate need of authoritative information, one of the foremost agencies for fighting infectious disease has gone conspicuously silent.

For the first time since 1946, when the CDC came to life in a cramped Atlanta office to fight malaria, the agency is not at the front line of a public health emergency.

On April 22, CDC director Robert Redfield stood at the White House briefing room lectern and conceded that the coronavirus pandemic had “overwhelmed” the United States. Following Redfield at the podium, President Donald Trump said the CDC director had been “totally misquoted” in his warning that COVID-19 would continue to pose serious difficulties as the US moved into its winter ‘flu season in late 2020.

Invited to clarify, Redfield confirmed he had been quoted correctly in giving his opinion that there were potentially “difficult and complicated” times ahead.

Trump tried a different tack. “You may not even have corona coming back,” the president said, once again contradicting the career virologist. “Just so you understand.”

The exchange was interpreted by some pundits as confirmation that the CDC’s venerated expertise had been sidelined as the coronavirus continued to ravage the US.

In the latest development, the New York Times reported this week the CDC has even been bypassed in its data collection, with the Trump administration ordering hospitals to send COVID-19 data directly to the White House.

When facing previous public health emergencies the CDC was a hive of activity, holding regular press briefings and developing guidance that was followed by governments around the world. But during the greatest public health emergency in a century, it appears the CDC has been almost entirely erased by the White House as the public face of the COVID-19 pandemic response.

This diminished role is obvious to former leaders of the CDC, who say their scientific advice has never before been politicised to this extent.

As the COVID-19 crisis was unfolding, several CDC officials issued warnings, only to promptly disappear from public view. Nancy Messonnier, director of the CDC’s National Center for Immunization and Respiratory Diseases, predicted on February 25 that the virus was not contained and would grow into a pandemic. 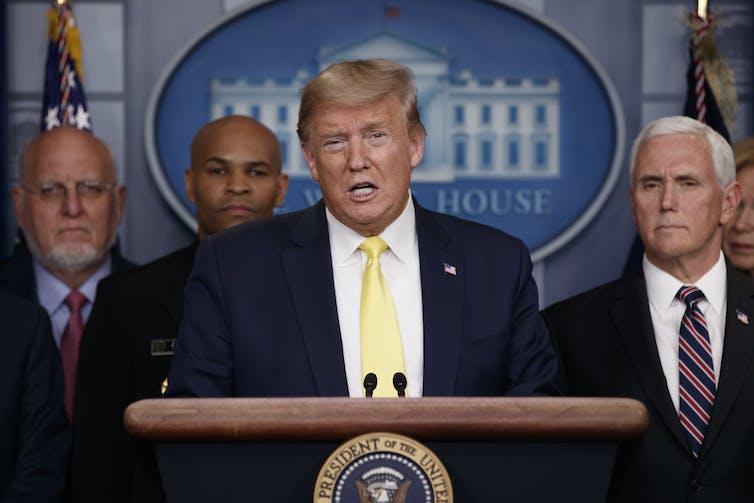 The CDC has erred during the pandemic, most significantly in its initial efforts to develop a test for COVID-19. The testing kits proved to be faulty – a problem compounded by sluggish efforts to rectify the situation – and then by severe delays in distributing enough tests to the public.

But many public health specialists are nevertheless baffled by the CDC’s low profile as the pandemic continues to sweep the globe.

“They have been sidelined,” said Howard Koh, former US assistant secretary for health. “We need their scientific leadership right now.”

What does it mean for the world?

The CDC being bypassed in the collection of COVID-19 data is another body blow to the agency’s standing.

Hospitals have instead been ordered to send all COVID-19 patient information to a central database in Washington DC.

This will have a range of likely knock-on effects. For starters, the new database will not be available to the public, prompting inevitable questions over the accuracy and transparency of data which will now be interpreted and shared by the White House.

The Department of Health and Human Services, which issued the new order, says the change will help the White House’s coronavirus task force allocate resources. But epidemiologists and public health experts around the world fear the new system will make it harder for people outside the White House to track the pandemic or access information.

Read more: Even during the coronavirus pandemic, the role of public health workers is unrecognized

This affects all nations, because one of the CDC’s roles is to provide sound, independent public health guidance on issues such as infectious diseases, healthy living, travel health, emergency and disaster preparedness, and drug efficacy. Other jurisdictions can then adapt this information to their local context — expertise that has become even more essential during a pandemic, when uncertainty is the norm.

It is difficult to recall a previous public health emergency when political pressure led to a change in the interpretation of scientific evidence.

Despite the inevitable challenges that come with tackling a pandemic in real time, the CDC remains the best-positioned agency – not just in the US but the entire world – to help us manage this crisis as safely as possible.

In the absence of US leadership, nations should start thinking about developing their own national centres for disease control. In Australia’s case, these discussions have been ongoing since the 1990s, stymied by cost and lack of political will.

COVID-19, and the current sidelining of the CDC, may be the impetus needed to finally dust off those plans and make them a reality.