Cricket superstar and actor, Brett Lee will showcase Sydney and its attractions to Australian and Indian travellers with the release of his new film, unINDIAN, a romantic comedy filmed exclusively in Sydney, premiering in the Harbour City this week. 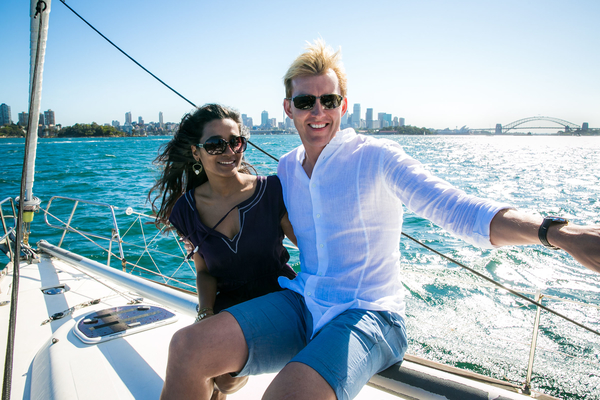 unINDIAN explores the complexities of a relationship between Aussie bloke Will, played by Lee, and beautiful Indian divorcee and single mother Meera, played by Indian actress Tannishtha Chatterjee. Their romance unfolds at locations across Sydney including the iconic Harbour, Coogee, Maroubra, the University of New South Wales, the Entertainment Quarter and the city's Indian food capital, Harris Park.

NSW Minister for Trade, Tourism and Major Events, Stuart Ayres, said unINDIAN was filmed with support from the NSW Government through its tourism and major events agency, Destination NSW.

“Filmed exclusively in Sydney, unINDIAN will showcase Sydney's stunning harbour, beaches and attractions to audiences across the globe, particularly in India, a key visitor market for NSW.  The film also features Destination NSW's Indian tourism campaign, Jhappi Time, in a unique collaboration that we hope will bring even more visitors to NSW,” Mr Ayres said.

Brett Lee said unINDIAN is both a love letter to Sydney, and a love story in itself.

“We filmed unINDIAN exclusively in Sydney in 23 locations, including at my character Will's warehouse apartment in St Peters, netball courts in Pennant Hills and the Entertainment Quarter in Moore Park. I really enjoyed filming at the University of New South Wales and the Cochlear headquarters, and of course we did some great shoots on Sydney Harbour. I honestly never tire of seeing the Sydney Opera House, Sydney Harbour Bridge and foreshore, particularly on a beautiful sunny, typically Sydney day.”

Destination NSW CEO Sandra Chipchase, said the collaboration with Bollywood Director Anupam Sharma made sense – with Sydney not only the perfect film set, but setting for a romantic holiday.  “In the year ending June 2015 NSW welcomed 103,000 visitors who stayed an average of 38.4 nights and spent $255 million with 50% of visitors staying in NSW for a holiday for a week or more.  The showcase of Sydney in unINDIAN will reach more Indian visitors who will see how beautiful the city is and what a great state NSW is to have a holiday.  It builds on our current Jhappi Time – the first campaign from an Australian tourism organisation specifically aimed at Indians visiting friends and family.”

The film's Director, Anupam Sharma, said: “Sydney is a wonderful location and therefore my first and only choice to be the canvas of my first and very unique Australian film, unINDIAN.”

Destination NSW has collated 'The unINDIAN Guide to Sydney' for visitors, taking in some of 23 locations featured in the film, which opens in cinemas nationally on 15 October 2015.

From the stunning Sydney Harbour to the artistic hub of the city's inner west, unINDIAN explores some great Sydney locations that are well-worth a visit for food, cultural experiences, coastal adventures and entertainment.

As seen in the film, Sydney's Harris Park is a curry-lovers haven, bursting with the tastiest curry puffs, pappadums, naan and butter chicken dishes outside of India. Take a stroll down the popular eat street, Wigram Street, and choose from the range of authentic restaurants on offer including Ginger, Spice of Life and Bilu.

When off the cricket pitch, Will frequents Sydney's trendy inner west, living in a converted warehouse apartment in St Peters (where TV show, The Bachelor's Heather Maltman also makes an appearance in the film). Will, a university lecturer, who offers a class in Aussie jargon, lives in a vibrant precinct that is often described as the creative heart of the city. Whether visiting Chippendale's White Rabbit Gallery to see one of the world's largest and most significant collections of Chinese art, perusing the weekend market at Central Park, stopping-in for a locally brewed beer at Willie the Boatman in St Peters, or having a meal at one of the city's most exciting new dining destinations, Kensington Street, the inner west is worth a visit.

unINDIAN's beautiful Meera, lives in the coastal suburb of Coogee with her daughter Smitha. Beach culture and family fun is at the heart of this laid-back suburb and a popular spot for swimming, surfing, snorkelling and scuba diving. A must-do on any visitor's itinerary is the spectacular 6km Bondi to Coogee Coastal Walk, which is one of the most picturesque walks in Sydney. Once at the end of the coastal walk, enjoy a long family lunch at one of Sydney's most popular venues, Coogee Pavilion.

Will and Meera were lucky enough to spend some time on Sydney's beautiful harbour, enjoying a day on a yacht and spending some time on the Sydney Showboat as they got to know each other. Adventurous travellers would love an exhilarating ride on an Oz Jet Boat as they speed past the Sydney Opera House, and those looking for a more relaxed experience can board an iconic Sydney Ferry to see the city from the water. Regardless of the adrenaline requirements, a harbour experience is an absolute must for any visitor to Sydney.

Take a leaf out of Will and Meera's book and enjoy a leisurely stroll along the Maroubra Beach foreshore. With great surfing conditions, seaside parklands and waterfront cafés, Maroubra is a popular spot for visitors and Sydneysiders alike. Learn to surf on the best surfing beach in Sydney's eastern suburbs and enjoy a post surf coffee and freshly baked croissant at The Grumpy Baker.