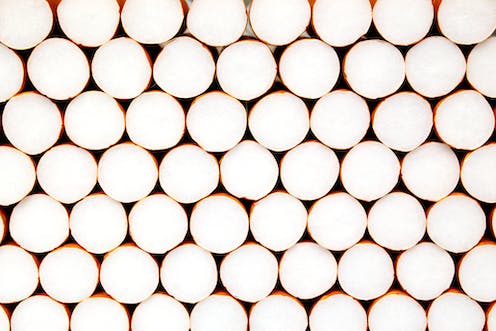 Filters were engineered to make cigarettes taste better, and seem safer. from www.shutterstock.com

Cigarette filters were initially introduced by the tobacco industry in the 1960s to make cigarettes “safer”. But we now know they provide no safety, no health benefits, and are a major cause of environmental littering.

It was initially professed that filters reduced tar and other toxicants, and prevented tobacco flakes from entering the lungs. It was soon discovered this wasn’t the case, and cigarettes were just as dangerous with filters. But it was years before the public discovered this, and even today most smokers believe cigarettes with filters are safer, probably because the taste is milder.

The majority of Australian cigarettes are further engineered to have vented filters (holes in them), supposedly to introduce fresh air into each puff and make smoking easier on the throat. These were deceptively named “light” and “mild” until the ACCC prohibited the practice, because it implied a less harmful or “lower-tar” cigarette.

The ACCC forced the tobacco companies to change the name of cigarettes, but not the content or mechanism. Some 90% of cigarettes in Australia now have vented filters. They’re easy to identify by unravelling the paper filter wrapping and holding it to the light.

What’s the effect of filters?

Larger modern filters, with tiny holes, introduce more air into each puff, making it feel “easier” on the throat. Smokers compensate, in order to extract a constant nicotine dose, by taking deeper puffs, and more of them.

This decreases smokers’ exposure to just a few carcinogens, but increases their exposure to more harmful smoke components in the vapour phase of the smoke, because it goes straight through filters and more into the peripheral airways.

This has caused a major upsurge in the last 30 or so years in adenocarcinomas, because more smoke goes into the peripheral regions of the lungs, where adenocarcinoma usually occurs. Central squamous cell cancers, cancers of larger lung tissue, have reduced in parallel, but this has had no effect on cancer numbers overall.

Filter fibres also break off and enter the lungs, which may lead to cancer.

Why does the type of cancer matter?

A 2012 Japanese study found there were significantly more lung cancer deaths in patients with adenocarcinoma than in patients with squamous cell carcinoma. This means the former is more deadly.

Around the world, women are more likely to smoke what they think are “light” (filtered) cigarettes. More Australian women die from lung cancer than from breast cancer. Although breast cancer is more common, it has a much higher survival rate than lung cancer.

The 2014 Surgeon General’s report on tobacco smoking confirmed cigarette engineering had caused an increase in lung adenocarcinomas since the 1960s, because of changes in cigarette design since the 1950s.

Australian and internationalresearchers have been urging the banning of filters since the early 2000s, and the regulation of cigarette content and engineering.

What about the environment?

Cigarette filters become cigarette butts. In Australia, cigarette butts are consistently the most littered item identified in national clean-up campaigns. Around seven billion butts become litter in Australia every year. Filters are harmful to the environment, as they contain plastic and are not bio-degradable.

Our urban environment, marine life, oceans, rivers and beaches would all benefit substantially from ending the sale of cigarettes with filters.

In 2011, the BMJ journal Tobacco Control reported the presence of heavy metals in cigarette butts were harmful to marine environments. Researchers found only one cigarette butt killed half the fish exposed to these chemicals in a lab setting. 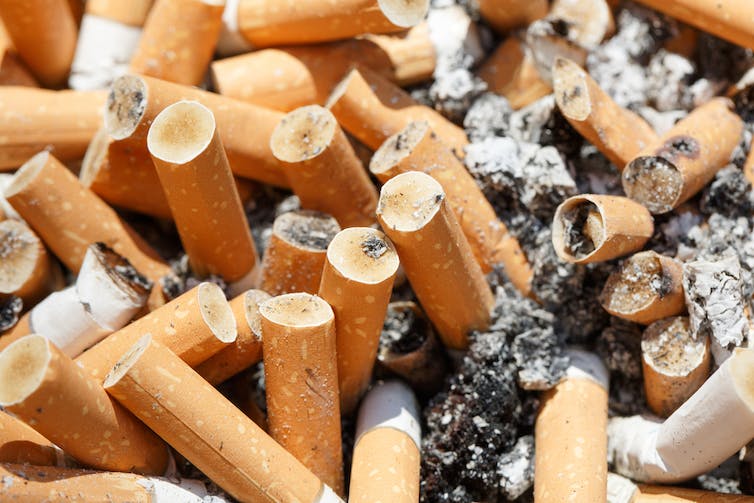 Why is there no regulation?

The Commonwealth government acted in 2009 to change the engineering of cigarettes in Australia to reduced fire risk from cigarettes. Some states banned fruit-flavoured cigarettes because the flavours were designed to be attractive to children.

Since 2014, the Commonwealth has failed to act on two comprehensive reports on effective regulation of cigarettes. Filter cigarettes should be recalled from sale in Australia, and the tobacco industry forced to pay local government and water authorities for cleaning up their toxic waste.

We must not mislead Australians about a “safer” cigarette. There isn’t one. But without filters, the number of lethal lung cancers may be reduced, more smokers would quit because of the harsh taste, and fewer young people would start smoking.

Dr. Kathryn Barnsley is affiliated with SmokeFree Tasmania, the Centre for Excellence in Respiratory Research, School of Medicine UTAS, and has been associated with the Tasmanian Cancer Council, the National Expert Advisory Committee on Tobacco Control, the Labor party and the Liberal Party.