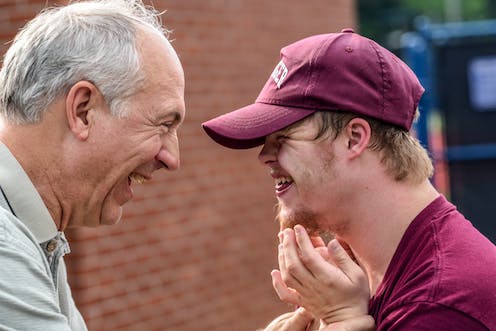 The initial aim of political correctness, to establish non-hateful language was, and still is, admirable.Nathan Anderson/Unsplash

In the second half of the 20th century, we came to accept that in certain cases we should avoid deliberately hurtful language. While many deride political correctness for going too far, its initial aim to establish non-hateful language was, and still is, admirable.

In the early 20th century, “moron” was a medical term for someone with a mental age of between eight and 12. “Mongol” was a person with Down syndrome, and also was indirectly a slur on people from Mongolia, some of whose features were supposed to resemble those with Down syndrome. “Retarded” described someone mentally, socially or physically less advanced than their chronological age.

We know these terms now primarily as pejoratives. “Mongol”, following the Australian tendency to form diminutives, has even given us “mong”, meaning someone who is stupid or behaves as such. Yet there is also a consensus such language is unacceptable. How did we get here?

The path to dignified language

In December 1948, the United Nations passed the Universal Declaration of Human Rights. Affirming the dignity of all humans, Article 1 of this landmark document states:

All human beings are born free and equal in dignity and rights. They are endowed with reason and conscience and should act towards one another in a spirit of brotherhood.

Article 2 goes on to specify this should apply

without distinction of any kind, such as race, colour, sex, language, religion, political or other opinion, national or social origin, property, birth or other status.

The declaration, prompted by the dehumanising events of the second world war, soon led to concerted initiatives to avoid hurtful and denigrating language.

Race and ethnicity was the first area to be addressed in Australia, where the philosophy of respect was enshrined in the Racial Discrimination Act of 1975. This included the currently controversial section 18C, which made it an offence to offend, insult, humiliate or intimidate someone else on the basis of race or nationality.

Read more –What is Section 18C and why do some politicians want it changed?

In the 1980s the scope was expanded in Australia to include gender and sexuality, with the legitimisation of terms like “queer”, and an increasing range of different kinds of sexuality now evident in the LGBTQI designations. 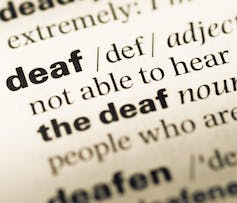 Words like ‘deaf’ and ‘blind’ are commonly used in negative ways.from shutterstock.com

The third big change involved the language for people with disabilities, whether cognitive or physical. Here the English vocabulary was full of terms that mixed description with pejorative overtones.

Words like “deaf”, “blind”, “dumb” and “lame” are not only descriptions of physical ability and disability, but are commonly used in negative ways. For instance, “deaf as a post”, “blind Freddie”.

We have now moved away from such language. Especially unacceptable are nouns like “retard” or adjectives like “demented”. In their place we have the principle of people first. The person and the disability are separated.

Instead of a phrase like “demented person” we have “person with dementia” or “person living with dementia”. The New South Wales Department of Ageing, Disability and Home Care has a list of such terms.

We should avoid terms that suggest deficit in a negative way, such as “disabled”, “invalid”, “retarded”, “handicap”, “spastic” and “cripple”. We should also avoid terms that explicitly specify limitation like “confined” (say, to a wheelchair). “Suffering from” is to be eschewed for the same reason, since it suggests the person is passive and incapable.

A number of paraphrases allow us to avoid sensitive terms. Instead of “blind” we have “visually impaired”. People are not “disabled” but “differently abled”.

Some of these terms can go too far and are effectively euphemisms because they sound overdone and excessively delicate, like “intellectually challenged”.

It is preferable to use language that doesn’t exclude people with these conditions from society. A good example of such inclusive language is “ambulant toilet”, often found in airports and public places, which simply indicates the toilet is suitable for anyone able to walk.

The Disability Discrimination Act 1992 consolidated these issues in Australian legislation, which now forms part of an expanding suite of anti-discrimination legislation both here and overseas. 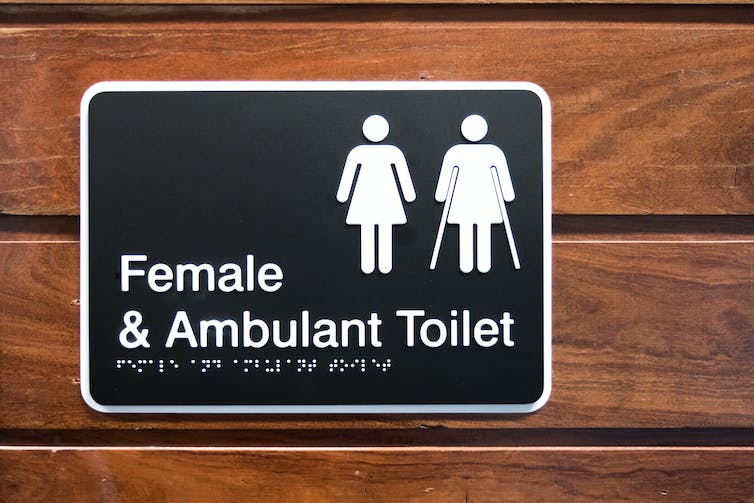 Ambulant toilet is a good use of inclusive language.shutterstock.com

Talking to someone with a disability

A general guideline for talking to someone with a certain condition is to ask that person how they wish to be described. In some cases, words like “deaf” have been reclaimed by bodies like the National Association of the Deaf in the US. The presence of the capital letter legitimises the term’s use, so long as it is done respectfully. In a similar way, various gender groups have reclaimed the word “queer”, and the fact they use it licenses others to do so too.

The requirement for respectful and considerate speech is not just a matter of good manners; it has teeth. Governments, education systems, companies, societies and other bodies often have guidelines for language use for people with disabilities.

Read more –Political correctness: its origins and the backlash against it

The US National Institutes of Health recommends “intellectually and developmentally disabled” or “IDD” for people with Down syndrome. Bodies like Dementia Australia have language recommendations.

Institutions and governments can apply a variety of sanctions to people who violate this principle in a persistent and hurtful way. These principles are now common in the English-speaking world and countries of the European Union, especially as enshrined in its Charter of Fundamental Rights.

In little more than a generation and half, we have become a more caring and inclusive society, and one much more aware of the importance of avoiding hurtful language. We don’t always get the expression right. But we are getting better at seeing the effect of what we say and write from the point of view of others.

Roland Sussex does not work for, consult, own shares in or receive funding from any company or organisation that would benefit from this article, and has disclosed no relevant affiliations beyond their academic appointment.