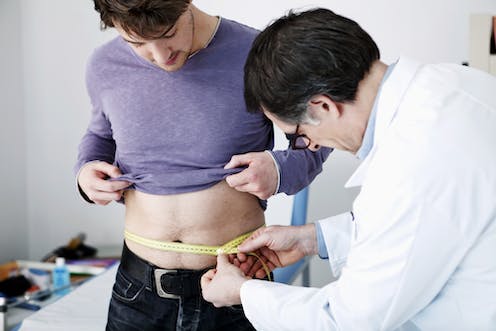 You can be in a healthy weight range according to BMI but overweight according to waist circumference.from www.shutterstock.com

A new study has found the waistlines of Australian adults are increasing faster than body weight.

So by continuing to use BMI (an indicator of weight for height), we’re underestimating the prevalence of obesity in the Australian population.

Our study compared three surveys of the Australian population, in 1989, 2000 and 2012. It included Australian adults aged 25 to 69 years with information on measured height, weight (measured using electronic scales) and waist circumference (measured using a flexible steel measuring tape across the abdomen).

Read more: Explainer: overweight, obese, BMI – what does it all mean?

We used a mathematical approach called linear regression, which allowed us to compare individuals of the same age, height and weight in 1989 and 2012. We could then estimate whether their waist circumference was the same.

We observed this phenomenon across all groups we analysed. That included age group, smoking status (current, former and those who’ve never smoked), education level (whether high school was completed) and BMI category (normal weight, overweight or obese).

Read more: Does my BMI look big in this? And does it really matter?

How can waistlines expand more than weight?

Studies internationally, across a number of high- and low-income countries, have also reported greater increases in waist circumference than would be expected based on increases in body weight.

While we can’t deduce why this phenomenon is occurring from the current study, nor previous studies, there are a number of hypotheses.

The most likely explanation is that, as a result of increasingly sedentary lifestyles, individuals now have relatively less muscle mass and relatively more body fat. So this results in a greater body volume for the same body weight. 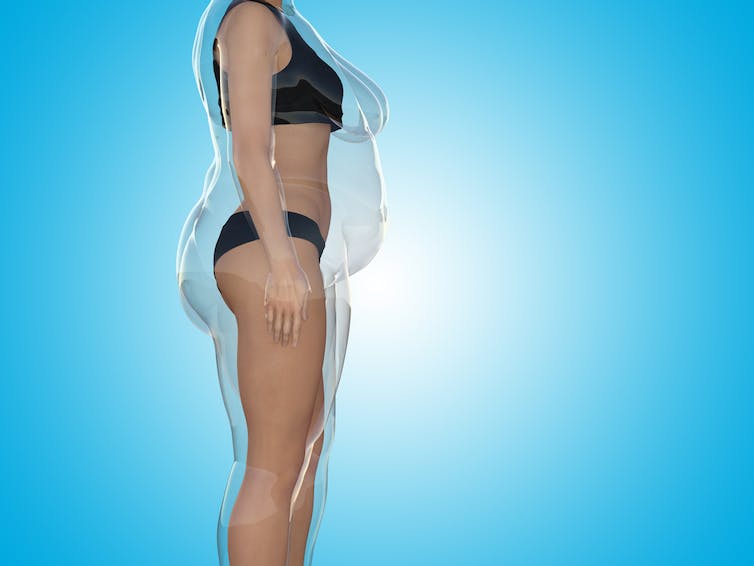 We now have less muscle mass and more body fat, which doesn’t weigh as much.from www.shutterstock.com

Why does this matter?

The major implication of this is that women and men are now at an increased risk of disease for the same body weight.

To effectively prevent and manage the obesity epidemic we need to accurately monitor the population prevalence. Our study shows using BMI is severely underestimating the actual prevalence of obesity in the Australian population and we should use a new way.