The federal government recently announced 16 Closing the Gap targets, seen by some as a policy re-set for yet another “once in a generation” chance to address Indigenous disadvantage.

But one barrier Indigenous people still face when accessing health care remains under-discussed: some are so concerned about how they will be treated in hospital, they don’t identify as Indigenous when asked.

We need to understand why that’s happening and address the reasons, or we’ll be left lamenting yet another failure to deliver on closing the gap.

Read more: Chelsea Bond: The 'new' Closing the Gap is about buzzwords, not genuine change for Indigenous Australia

Many Indigenous patients are incorrectly identified

In general, most hospital data in Australia is of a very high standard. Hospitals collect information about patient care, waiting times, disease and other factors. These data are sent to the national hospital information reporting system run by the Australian Institute of Welfare (AIHW). By and large, this data set is comprehensive, coordinated and consistent.

Indigenous status has been a mandatory data item since 1996 for all hospitals in Australia. But as the most recent report from the AIHW on hospital data notes, the “true” number of separations (meaning hospital admissions) should be about 9% higher than reported for Indigenous Australians.

Studies measuring identification of Indigenous patients in hospitals, GP clinics and other health services have found rates of accurate identification could be as low as 34%.

My study of 784 cardiac patients (70% Indigenous and 30% non-Indigenous) found only 60% of the Indigenous patients were accurately recorded as Indigenous at hospital.

The Australian Bureau of Statistics (ABS) also acknowledges that accurately calculating Indigenous life expectancy isn’t easy, noting “particular methodological challenges” and that the proportion of the increase in the Indigenous population in Census counts changes in a way that can’t be easily explained. In other words, people’s propensity to self-identify as Indigenous can change over time or depending on circumstances.

Hospital staff may be reluctant to ask a patient whether they are Indigenous, because they may harbour a belief Indigenous people get preferential treatment, or may fear provoking an angry response from patients.

Other countries, such as the United States and Canada, also have issues collecting information about race and ethnicity.

Ethnicity data for First Nations peoples in Alaska and the rest of the US was said to be “very problematic” and the validity of ethnicity information was related to the way it was collected. Data collection was inconsistent and often inaccurate. 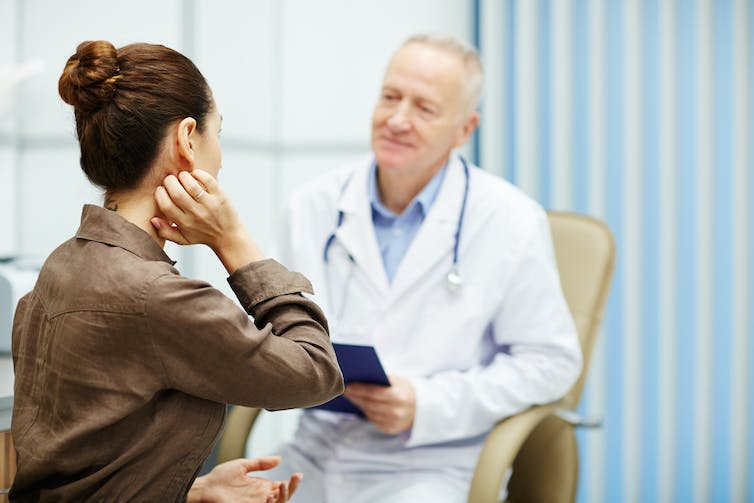 Hospital staff may be reluctant to ask a patient if they are Indigenous. Shutterstock

Indigenous people are reluctant to identify for many reasons, including:

It’s no wonder some are concerned about receiving different treatment.

AIHW reports that Indigenous Australians have, in general, longer waiting times than other Australians for many surgical procedures.

It’s not uncommon to hear rhetoric suggesting this lower standard of care is somehow the fault of the Indigenous patient; that poorer outcomes can be put down to incomplete health records, lower levels of education, or competing personal and family demands. Cultural misunderstandings, transport issues, financial constraints or “being more mobile” are also sometimes used to excuse poor health-care delivery.

These excuses reinforce the dominant cultural viewpoint in Australia about Indigenous people to explain away systemic shortcomings that reinforce and perpetuate racism.

Geographical access is not the cause, as only 12% of the Indigenous population live in very remote areas. Most Indigenous people live in cities and urbanised areas with well-equipped local hospitals.

Hospital staff (both clinical and administrative) reflect the attitudes and beliefs of their own community. But we assume and expect them to park unconscious biases and personal prejudices at the door when they start work.

My study into cardiac care for a cohort of Indigenous patients found racism influenced the patient journey of Indigenous people within mainstream hospital and health services.

Racism is, as Beyond Blue says in its campaign, the invisible discriminator.

Central to these actions is the idea that care should be culturally safe and identification of Indigenous status should be improved.

However, we are yet to see meaningful progress.

It’s important to collect and report data on Indigenous status among hospital and health-care patients. But we must make sure it is done in a way that is respectful and clinicians take more responsibility in collecting and reporting Indigenous status. Indigenous status must be used to inform a higher quality of care for Indigenous patients first, then used to report on Closing the Gap targets.

Clinicians must be better trained to prevent conscious and unconscious bias creeping into their work practices. We need to combat racism in the health-care sector, and we’re not going to achieve that while Indigenous status remains just another box-ticking exercise.

Read more: We have 16 new Closing the Gap targets. Will governments now do what's needed to meet them?