The 14-day average of daily new cases has fallen to 29.4. This is below the 30 to 50 required for the second step of the roadmap out of restrictions, planned for 11:59pm this Sunday.

Andrews wouldn’t confirm which restrictions will be eased, but from an outbreak-management perspective, we should be cautious about easing anything too quickly.

It would be a huge shame to see Victorians’ pain and sacrifices undone, and I hope the restrictions will be eased early based on epidemiological advice, rather than mounting political pressure.

The 14-day case average of 29.4 is based on the new cases announced each day, though sometimes cases are reclassified later on. According to my corrected data, the new case average is 30. Either way, it’s a vast improvement compared with the peak in early August when the 14-day average reached over 460.

Nevertheless, the current figure is still in the “red zone” of more than 100 cumulative cases in the past fortnight, where cases can spiral out of control if restrictions are eased too suddenly.

Ideally, the most significant easing of restrictions would only happen when the 14-day average hits the “green zone” of fewer than five cases, which is currently planned for October 26.

It’s risky to relax too soon, because there are still many “mystery cases” for which the source of infection is unknown. Victoria’s Deputy Chief Health Officer Allen Cheng confirmed these mystery cases are currently spread across 18 local government areas. He said:

Most of those are still in the areas where we are concerned […] Each local government area has a relatively small number of cases and I guess it does reflect that there has been community transmission out there.

These areas include Casey in Melbourne’s southeast, and Brimbank and Hume in the city’s northwest.

I would be very cautious about easing restrictions ahead of schedule when there are still mystery cases. There is likely still some community transmission that is yet to be detected by contact tracers.

Cheng added, however, that if the number of mystery cases continues to decline, this would give confidence there has been minimal further community transmission.

The early easing of restrictions could be justified if the new cases are within known risk groups and we are confident that the risk has been contained. 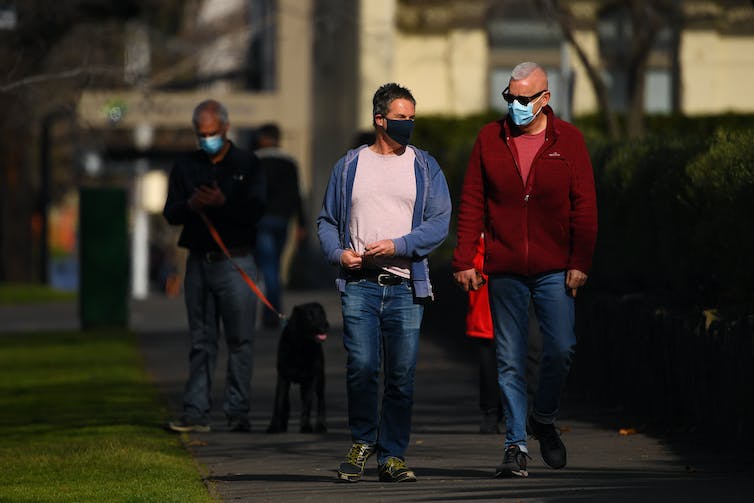 Andrews confirmed he wouldn’t yet budge on the nightly curfew, which has been subject to intense questioning by journalists and commentators, and criticism from some members of the public.

From an outbreak-management perspective this is the right approach. The curfew has several aims, one of which is to restrict the movement of younger people. Younger people have been disproportionately COVID-positive during Victoria’s second wave. Younger adults tend to be more socially connected, have more daily contacts with one another, and often work at several workplaces. All these factors increase the chances of acquiring and transmitting COVID-19.

Read more: COVID-19 cases are highest in young adults. We need to partner with them for the health of the whole community

There’s an ongoing risk to Victoria’s case numbers from residential aged care. If the virus continues to circulate in aged care, it poses a risk to residents and staff, and might also escape to the wider community via infected staff.

Aged-care homes must provide adequate personal protective equipment. There have been concerns among staff that surgical masks are not enough to prevent contracting COVID-19. The World Health Organisation does recommend a surgical mask and face shield, but this requires a minimum safe airflow change in rooms to prevent exhaled infectious particles from hanging in the air and causing airborne spread.

Scientists believe most transmission occurs through droplets, but poorly ventilated environments might explain the increased risk of airborne spread in confined spaces. 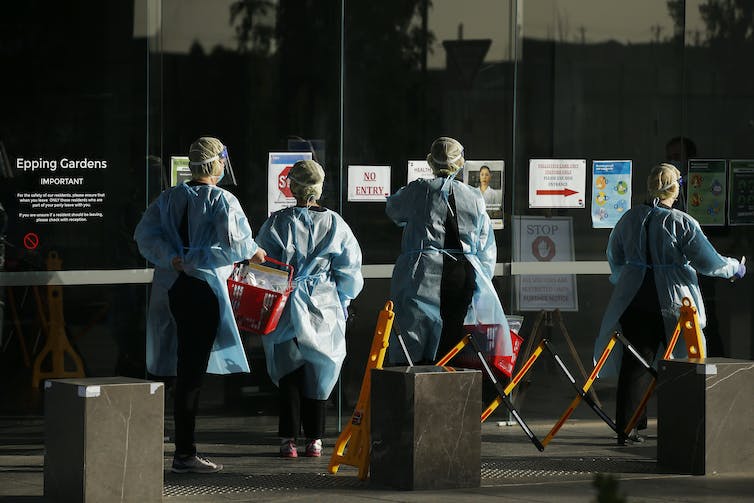 Read more: Is the airborne route a major source of coronavirus transmission?

Most residential aged-care facilities will not be able to meet the safe level of room airflow of 40-80 litres per second per resident.

Therefore, in situations where airflow is not adequate, surgical masks should be replaced with respirator masks, such as N95 or P2 masks, to prevent staff acquiring the virus at work.

It’s likely that transmission in aged care homes will continue if this issue isn’t addressed. The issue of poor airflow could also apply to other workplaces like abattoirs, factories and shared office spaces. Going forward, they too should consider the risk of airborne spread.