Europe is again in the grip of a COVID-19 resurgence, with outbreak hot-spots in the United Kingdom, Spain and France each reporting thousands of new daily cases.

The level of infections are now higher than in March and April across many countries, after restrictions were significantly eased over summer. But now many areas are being forced to re-introduce varying levels of restrictions, though most countries are resisting nationwide lockdowns.

Second wave peaks are significantly higher than in the first wave

During the country’s first wave, France’s daily new case numbers reached a peak of just over 7,500 on March 31. Its new peak was recorded on Sunday with 26,675 new cases in the previous 24 hours, over three times higher than the first peak.

Spain has recorded over 30,000 cases in the last week, with more than 20,000 of these coming from the Madrid region alone.

However, these are only the new cases reported from the testing sites. These numbers are known to underestimate the true number of infections, because many people have no symptoms and so are unlikely to get tested.

Researchers from the Imperial College London tested 175,000 people in the UK — whether they reported symptoms or not. They found 824 were positive, and used this to estimate there were around 45,000 new daily infections between September 18 and October 5. This would amount to more than double, or often more than triple, the official daily new positive tests results reported during that time.

Summer is the vacation season and a “golden goose” for European economies, so many countries lifted various restrictions to enable tourism.

Many people had a sense of regained freedom and a feeling of lesser need to adhere to physical distancing measures over the summer months. This was reflected in another ongoing research project by Imperial College. Researchers found many Europeans surveyed had relaxed their behaviour in the last few months, compared to in April.

Indeed, Europe’s second wave points to an element of restriction fatigue after months of restrictions on daily life and with economies faltering. WHO Europe director Dr Hans Kluge acknowledged “It is easy and natural to feel apathetic and demotivated, to experience fatigue”. He called on European authorities to listen to the public and work with them in “new, innovative ways” to reinvigorate the fight against COVID-19. 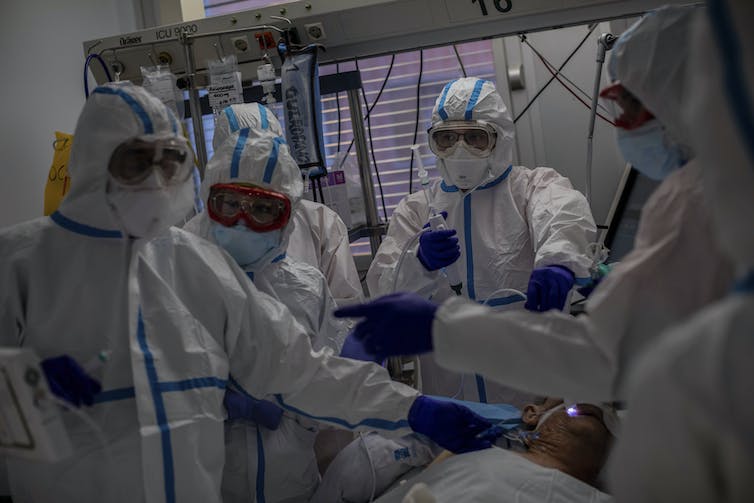 Health-care workers attend to a patient in Madrid, Spain. Intensive care wards are filling up across the city amid a resurgence of the virus. Bernat Armangue/AP/AAP

Restrictions are returning, but no national lockdowns yet

In recent weeks, many European leaders have announced targeted, localised restrictions, but no national lockdowns as yet.

The French government reimposed restrictions in many urban areas, including limiting the capacity of restaurants and classrooms, and closing bars and gyms.

Spanish Prime Minister Pedro Sánchez introduced travel restrictions to and from Madrid, which inspired protests and earned his government a “criminal and totalitarian” label from dissenters and their political opponents on the far-right.

Like France and Spain, the UK government is not planning to reimpose a national lockdown despite a record number of cases. Prime Minister Boris Johnson has opted for “a balanced approach” enforcing a three-tier alert system across England — medium, high, and very high — depending on the severity of outbreaks.

Before the emergence of the European second wave, Germany was a role model for its successful approach to combating the virus. This image will be hard to sustain though, as in the past few days the country has experienced its highest daily increase in cases since its peak in early April. The country’s capital Berlin, famed for its rich nightlife, entered its first curfew in 70 years from October 10. 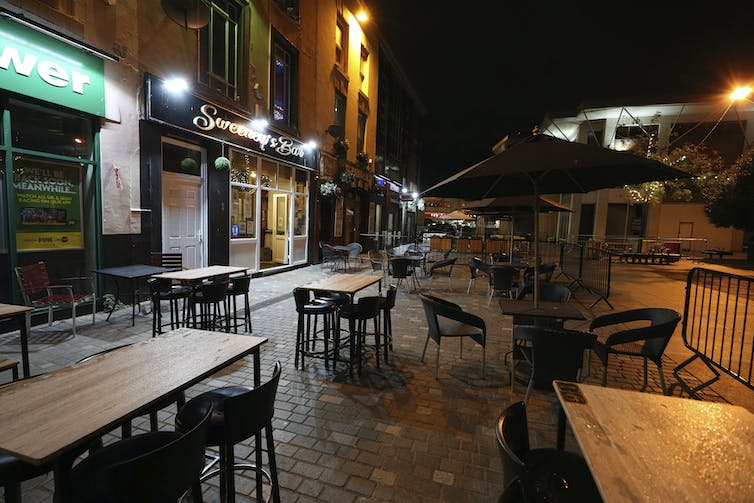 Pubs and gyms have been forced to close in Liverpool, England this week. Peter Byrne/AP/AAP

Europe could look to the success of countries like Vietnam

By contrast, several South-East Asian countries are doing exceptionally well. Over the past two weeks, Vietnam, Thailand and Cambodia have reported around 0-5 daily new cases on average despite dense populations. It’s important to note there may be undercounting in case counts and deaths, but this doesn’t detract from the overwhelming success these countries have had.

Vietnam’s total number of cases is just 1,113, which is extremely low for a population of nearly 100 million. One tactic used by health authorities has been targeted testing, where they’ve focused on high-risk individuals and on buildings and neighbourhoods where there have been confirmed cases. Health authorities have also implemented extensive contact tracing, and aimed to identify those at risk of exposure regardless of symptoms. The country also set up quarantine facilities for infected people and international travellers, minimising spread inside households.

In Thailand, health volunteers have been visiting areas of clusters, triaging cases, sending people with symptoms to medical clinics for testing, and dispelling rumours and misinformation. They have also taught people how to properly wash their hands, emphasised the importance of masks, and dispensed hand sanitisers. In addition, the Thai Department of Disease Control has been contacting hospital staff from every province to ensure they know how to detect cases and how they can prevent outbreaks in the hospitals. This education, and the army of volunteers, have helped keep total number of cases to just over 3,500. 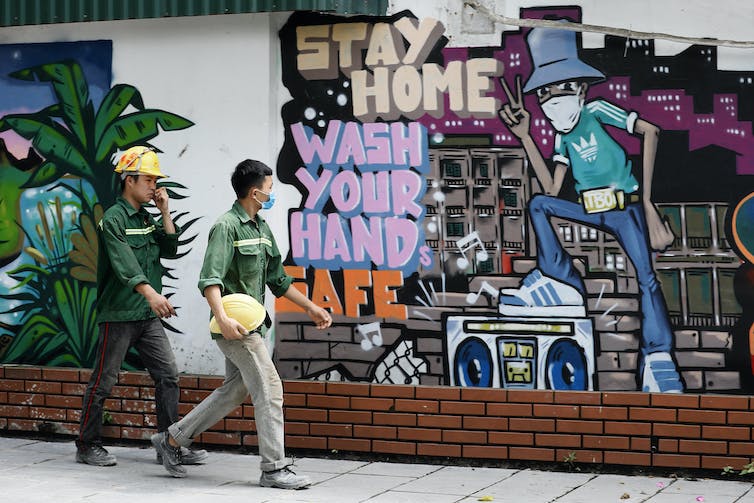 Graffiti in the Vietnamese capital, Hanoi. Despite a population of nearly 100 million, the country has recorded just over 1,100 COVID-19 cases. LUONG THAI LINH/EPA/AAP

Despite having a relatively weak medical system, Cambodia’s total case numbers are extremely low at just 283, with zero deaths. The country has conducted extensive contact tracing, utilising 2,900 health-care workers who were trained in contact tracing at the start of the year. The country also went into a strict lockdown early in the pandemic including by shutting schools and entertainment venues. Travel has also been restricted. Almost 80% of Cambodia’s population lives in rural areas with a low population density, making it easier to manage the spread and to allocate resources to denser, higher-risk locations such as Phnom Penh, Siem Reap and Sihanoukville.

Having experienced the SARS and avian flu epidemics, many Asian countries took the threat of COVID-19 seriously right from the beginning. In addition, many countries implemented strict mask wearing and physical distancing early. Targeted testing, education and the involvement of the community are critical in responding to COVID-19.