QINGDAO, China, Dec. 16, 2021 /PRNewswire/ -- In the latest statistics of the Qingdao Customs Authority, the first 11 months of 2021 showed for the first time the 773.43 billion RMB or over the 700 billion RMB mark and a growth of 35.7% compared to the same period in 2020 and 45.4% compared to the same period in 2019, which would account for 29% of the total foreign trade volume of the province. Imports and exports are 13.7 and 1.1 percentage points higher than the national and provincial average, respectively; The growth rates in terms of foreign trade as well as import and export individually are the best among cities with independent planning status. An aerial view of unmanned automated dock at Qingdao Port

"Given the high global prices of energy, raw materials, and bulk goods, rising costs for the international transport of goods, the recurring global problems with the COVID-19 pandemic and the significant external risks, including the severe economic recovery of the world, Qingdao's import and export have set a historic record in the first eleven months, which is a true masterpiece," said the head of the global research base for the World Economy in Shandong, Professor from Institute of Economics at Qingdao University, Mr. Zhou Shengqi.

As far as different categories of Qingdao's foreign trade structure are concerned, they mainly have the following characteristics: General trade and imports and exports in the bonded area have increased dramatically, the share of foreign trade of private companies has increased, and imports and exports towards the main markets both have risen significantly. In addition, it is the same at Qingdao as at other locations in China that imports of bulk goods have greatly increased. Many domestic research institutes have pointed out that the reasons for growth should be considered objectively, as they are closely linked to price factors.

Zhou Shengqi has stated that the series of measures initiated by Qingdao to "stabilize foreign trade" has contributed significantly to Qingdao's strong foreign trade growth. The facilitation of cross-border trade in Qingdao and the optimization or reform of the port business environment have continued to accelerate, gradually reducing the costs of foreign trade companies and continuously improving trade efficiency. High-level platforms for opening up, such as the SCO Model Zone, Qingdao Free Trade Zone, Comprehensive Pilot Zone of Cross-Border E-Commerce, Model Zone for The Promotion and Innovation of Import Trade, have played a significant leading role in promoting foreign trade growth. New forms of foreign trade. such as "cross-border e-commerce" and "market procurement" as well as emerging markets such as countries along the "Belt and Road", whose products are highly complementary to those from Qingdao, have also created new drivers for the rapid development of Qingdao's foreign trade. 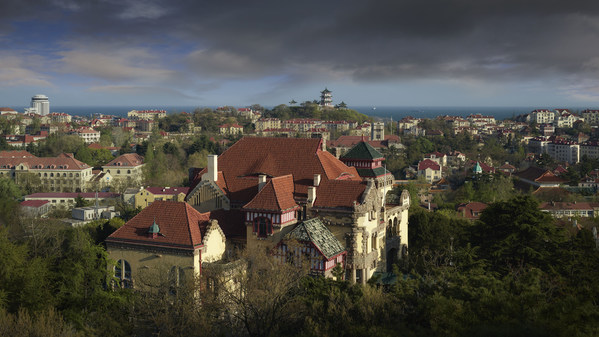 View of Xiaoyu Mountain from afar