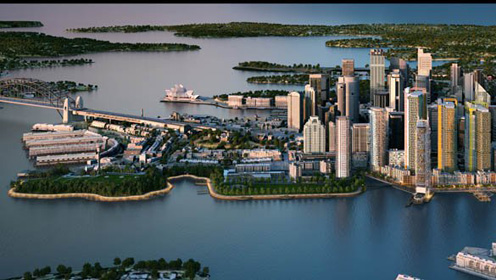 A $7.3 million City of Sydney revitalisation program has helped “pave the way” for better links between historic Millers Point and the new Barangaroo precinct.

“These works integrate the unique heritage character of Millers Point with the new development at Barangaroo,” the Lord Mayor said.

“Millers Point was once a working wharf with roads designed for truck movements. These works connect the city to the new Barangaroo Reserve and reflect the fact it’s no longer an industrial area.

“People will now find it easier to visit the new Barangaroo Reserve and other older parks in Millers Point, such as Munn Reserve, which has been extended with new plants, lighting, lawn areas and historical signs.

“I encourage everyone to go out and explore the streets, laneways and rich history of Millers Point, and to try out the new connections to the wonderful Barangaroo Reserve.”

The intersection at Dalgety, Munn, Bettington and Argyle streets, near the Palisade Hotel, was pivotal in the social history of the area as a focus for the waterside workers and the local community.

Local heritage has been recognised with new sandstone blocks on a section of Dalgety Road, marking the remnants of a convict wall.

Sandstone steps in Munn Reserve have also been inscribed with verses of The Millers Point Mob children’s song, which the local kids of the period used to sing out as they walked through the city.