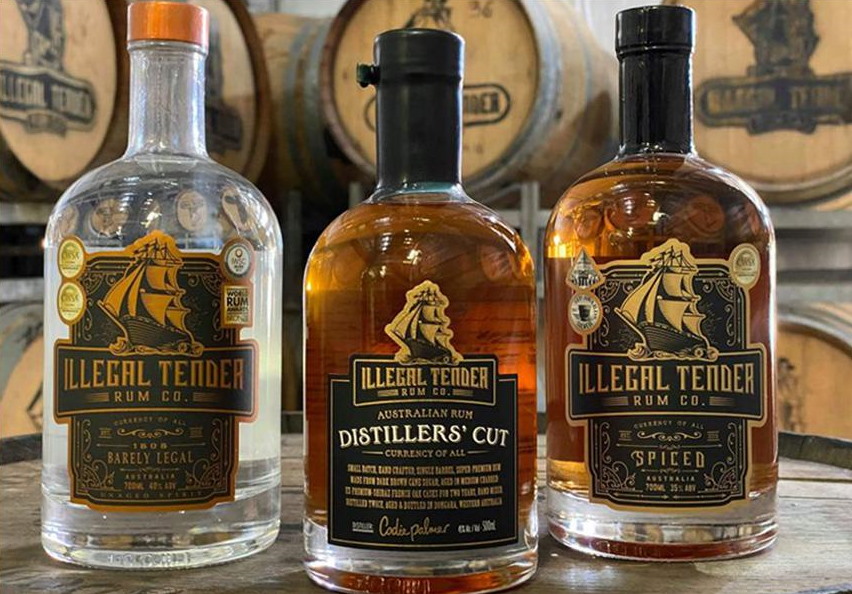 When you think of rum, you might think of the 17th century Caribbean (it’s okay if you didn’t). This was the time and place that rum was first discovered and produced on sugar plantations. Today, these popular spirits are produced all over the world, from the Philippines to Puerto Rico. And if you’re new to the world of sophisticated drinks, you might be surprised to know that not all rums are dark. So whether you want to pair your bold spirits with juice, ice, or a bit of food, keep reading to find out about the different types of rums you can get. And with all this knowledge on the range of rums, you’re sure to win the next trivia night up the pub.

This is the rum you think about when someone mentions “rum”. It gets its dark colour from the longer time it spends in the barrel. The final product has the richest, strongest, and most intense flavour and aroma. However, many popular rum makers actually add sugar to their rum after it has been distilled. This mimics the rich and smooth texture of more expensive dark rum. If you are looking for something more authentic, Australian-owned Illegal Tender Rum Co. makes some award winning dark rums that are also free from sugar, preservatives, and even gluten.

You knew this one was coming right after dark rum. This colourless rum is also known as silver rum or light rum. Aged white rum is made by charcoal filtering an aged dark rum. This process of filtering removes the colour but preserves the same rich taste. The filtration process makes the white rum a more pure or clean variety of rum, which is great for mixing in drinks.

As its name suggests, the Amber rum (also known as Gold rum) has a colour that is a shade between white and dark rum. It often has a pale brown or clear gold tinge, making it a popular choice for use in cocktails. Its colour comes from the addition of caramel, which also gives the type of rum a sweeter and richer taste. Unlike rums that are labeled as “aged”, Amber or Gold rum does not get its colour through the ageing process.

Spiced rum is darker in colour than Amber rum, and typically contains a couple of core ingredients. These include rosemary, orange, cardamom, cloves, cinnamon, and nutmeg. If you are on the lookout for rums that taste authentically Australian, Illegal Tender Rum Co. uses native and indigenous Australian ingredients including kakadu plum, wattle seed, and lemon myrtle in their spiced spirits.

Aged rum are usually rums that have been sitting in their wooden, usually oak, casks for a long time. Their casks have typically been used to house other types of alcohol including bourbon, sherry, wine, port, and cognac. Sometimes, rum makers go through a process of “finishing” which requires transporting the rum to a different cask in the last stage of their ageing process.

Dry rums are also known as light white, blanco, and platino rums. These spirits are made in short periods of time, with little to no aging process. 3 years is the most time these rums are aged, and the colour is removed during the charcoal filtering process. The wooden casks that these rums sit in have less of an effect on their colour and flavour, as they do not stay in the barrel for very long.

This type of rum is the sweetest of all rums, as it contains a high level of fruit extract and juices. Its high sugar content also means that its alcohol level is pretty low compared to other rums. Any other type of rum can also be flavoured with spices, fruit juice, or flavour essences.

This is an informal name to call the type of rum that tastes strong, tannic, and is dark. Naval rum is made using rum from different countries along the routine routes of the Royal Navy.

The alcohol content in a bottle of overproof rum ranges from 60% to 84%, giving them the highest concentration of alcohol of all the other rums. These rums are either diluted only a little, or not at all. Rum that has over a 50% alcohol content can be categorised as overproof, but is not to be confused with high-strength aged rums. The latter are more appropriately called barrelproof rums.

The wonderful world of rum

There you have it. An introduction to the wonderful world of sophisticated drinks that is rum. From light white rums that mimic vodka to rich, aged rums, there is a diverse range to choose from. You want to go slow and steady with these spirits, as you might find yourself a little too fond of them. Remember to drink in moderation, so savour each sip.

When you are looking to purchase rum for sale online, a good tip is to select those with no added sugars, so you can enjoy their natural flavours. What’s more, rum that comes without additives means you can mix them into cocktails yourself. Also, reading some reviews online about the brand and seeing their award history helps.

With so many types of Australian rum available on the market, you’ll have a blast finding one to boast about at parties. After all, everyone loves to hear a spirit-snob talk about their favourite type of rum… right?