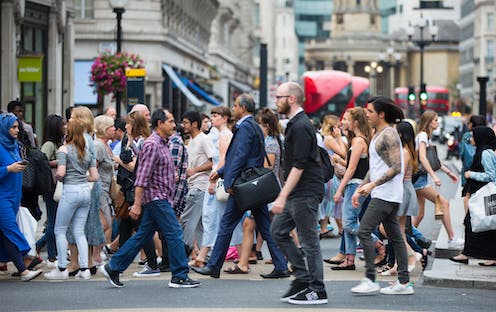 Rates of gonorrhoea are increasing in the Australian community. from www.shutterstock.com

Data released today by the Kirby Institute shows a widening gap in HIV infection rates between Indigenous and non-Indigenous people. It also found gonorrhoea is rising in young people. And the number of people living with hepatitis C with severe liver disease has decreased.

Increasing disparities between Indigenous and non-Indigenous

Over the last five years, we’ve seen the rate of new HIV diagnoses decrease by 22% and hepatitis C diagnoses remain stable in the non-Indigenous population. But among Aboriginal and Torres Strait Islander people new diagnoses rates have increased by 33% for HIV and 25% for hepatitis C. 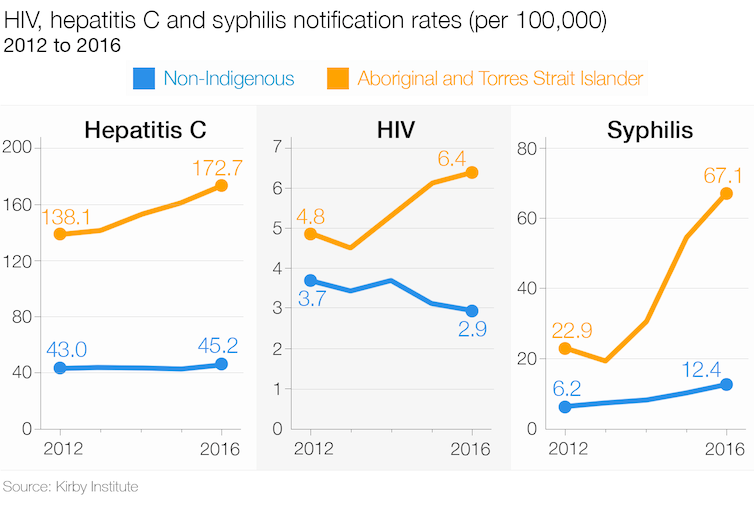 HIV risk factors vary in the Indigenous population, with a higher proportion of HIV diagnoses through injecting drug use or heterosexual sex, and in women. There’s a lack of discrete strategies to address these differences with non-Indigenous people.

These rates suggest more needs to be done to reduce this growing gap in health status. Improving access to prevention and treatment services is key. The different HIV risk factors indicates the prevention response needs to be multi-faceted.

Risk behaviours have complex social causes, including poverty and discrimination. Access to and use of health services are strongly influenced by these factors.

In regional and remote areas of Northern Australia, chlamydia and gonorrhoea rates in 2016 were up to 30 times higher than in the non-Indigenous population. There has been a resurgence of syphilis in young Aboriginal people in remote areas, bringing with it congenital syphilis, which affects babies. There are initiatives underway to address the syphilis resurgence, including enhanced testing and treatment, and culturally appropriate health promotion campaigns.

Gonorrhoea on the rise

Gonorrhoea diagnosis rates in women increased by 43% over the past five years, particularly in major cities where the rate almost doubled in the last year alone. The patterns in younger women are the most striking, with gonorrhoea diagnosis rates increasing by 39% in women aged 20-24 years, 93% in those aged 25-29 years and 94% in those aged 30-39 years between 2012 and 2016. Similar trends were seen in gay and bisexual, and in heterosexual men.

Untreated gonorrhoea can lead to pelvic inflammatory disease (an infection of the reproductive organs) and infertility in women. Gonorrhoea has no symptoms in 80% of women, so regular testing is important to detect the infection early and prevent serious consequences. But in 2016, only 20% of young women and 9% of young men attending general practice had a gonorrhoea test.

Untreated hepatitis C can cause severe liver disease, transplants and death. In 2016, hepatitis C was still responsible for one-third of all liver transplants in Australia.

This decrease in the estimate is due to new, highly effective treatments for hepatitis C becoming available for anyone living with the infection through the Pharmaceutical Benefits Scheme in March 2016. As a result, the number of people living with hepatitis C receiving treatment increased four-fold between 2015 and 2016.

Despite this good news, more than 120,000 people living with hepatitis C are yet to be assessed for treatment, which includes having the additional tests required to confirm their diagnosis.

The World Health Organisation has set a target for virtual elimination of hepatitis C by 2030. To meet this target, Australia must sustain this initial surge in treatment through screening of high-risk populations, including people with current or past injecting drug use, and immigrants from high-prevalence countries, where unsafe medical procedures are largely responsible for infection.

James Ward receives funding from the National Health and Medical Research Council and The Australian Government Department of Health to progress research and programs in STIs and BBVs in Aboriginal and Torres Strait Islander communities.

Rebecca Guy receives funding from Australian Government Department of Health and the NHMRC.

Muhammed Jamil and Praveena Gunaratnam do not work for, consult, own shares in or receive funding from any company or organisation that would benefit from this article, and has disclosed no relevant affiliations beyond their academic appointment.