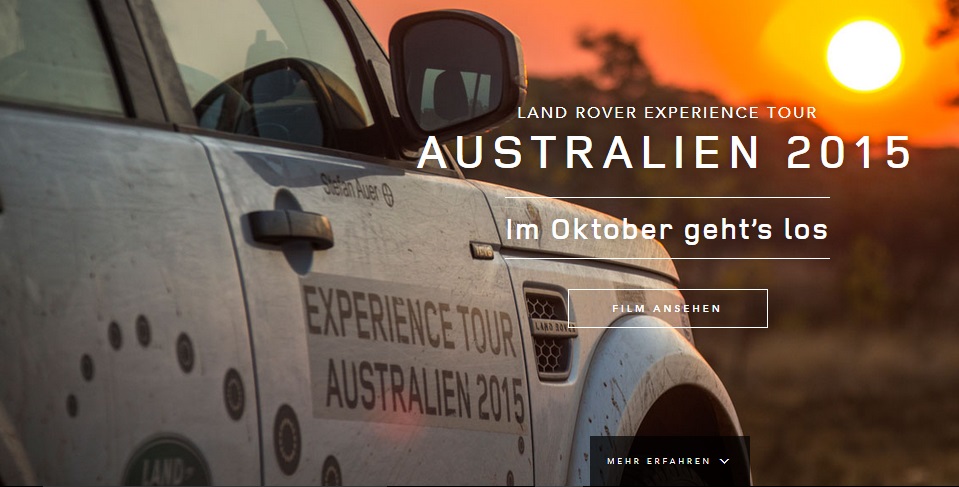 A convoy of Land Rover vehicles have arrived in the Territory ahead of a three-week journey that will help attract more international visitors and deliver millions of dollars’ worth of exposure for the NT across Europe.

Twelve Land Rover Discovery Sport cars, seven Discovery IVs and a custom designed truck will take part in the 2015 Land Rover Experience Tour which kicks off in Gove on 19 October.

Chief Minister and Tourism Minister Adam Giles said the Land Rover Experience Tour would involve almost a hundred people, including more than 50 international media representatives, who will test the vehicles in remote terrain over a three week period.

“The Land Rover Experience Tour will deliver exposure for the NT overseas that money simply can’t buy,” he said.

“It will allow us to showcase the Territory as a ‘must-do’ holiday in our key European tourism markets showing off our stunning sights and attractions like Bawaka, the East Arnhem Coast, Nitmiluk National Park, the Gregory National Park, Kalkarindji, the Tanami Desert and Uluru-Kata Tjuta National Park.

“From tropical beaches to Indigenous rock art, vast blue skies and the red dirt of Central Australia, the Northern Territory is the ultimate adventure drive destination and it is great to see this recognised by a global brand like Land Rover.”

More than 100,000 Germans applied for the tour via a registration process that also involved driver training testing, with six participants chosen to take part along with support crew and international media.

The three sections of the route will be Nhulunbuy to Katherine, then Katherine to Kalkarindji with the final leg culminating at Uluru on 5 November – a total distance of 3615 kilometres.

Land Rover is investing more than $5 million in the promotion and operation of the project with media coverage of the event expected to generate between 200 – 300 million page views worth the equivalent of tens of millions of dollars’ worth of advertising.

In addition, it’s estimated Land Rover will spend at least $650,000 in the Northern Territory on the purchase of services including accommodation, transport, meals, equipment hire, fuel plus sight-seeing costs and personal expenditure during the course of the event.

Mr Giles said the event was part of an innovative new international marketing strategy where Tourism NT was looking to partner with non-travel media to put the NT in front of new audiences, positioning the Territory as an active, adventurous destination.

“It’s all part of the Country Liberals Government’s plan to drive the development of Northern Australia and build a $2.2 billion visitor economy by 2020,” he said.

For more information on the Land Rover Experience Tour got to: www.landrover-experience.de/experience-tour/