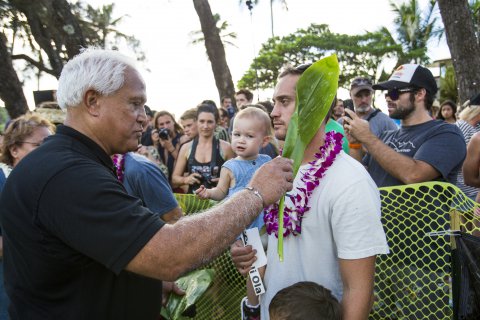 North Shore, Oahu, HAWAII - (February 8, 2016) -  The Quiksilver In Memory of Eddie Aikau will GO this Wednesday, February 10, at Waimea Bay. Organizers gave the event the green light early this-morning after consulting the latest round of forecasting models. This will be the 9th "Eddie" in 31 years. The event was last held in December of 2009, and was won by California's Greg Long.
Organizers anticipate a solid day of surf that will meet the event's strict wave face height requirement of 40 feet, with favorable light winds in the morning, turning light trades by afternoon.
"It has taken us six years to pull the trigger, but this is the first swell we have seen that is truly lining up as an Eddie swell," said Event Director Glen Moncata.
Moncata and the organizing team continue to confer with event patriarch George Downing, who has made the call on every event since its inception.
"As George has famously said, 'The Bay Calls the Day' and that will be Wednesday," added Moncata.
There will be various platforms on which to view the Quiksilver In Memory of Eddie Aikau: