While Australia gradually opens up from COVID-19 lockdown, Victoria is still struggling to contain the outbreak. The Black Lives Matter protest in Melbourne on June 6, which attracted thousands of face-masked and hand-sanitised protesters, did not prove to be the public health nightmare many commentators (particularly politically conservative ones) had predicted. But Melbourne is nevertheless contending with a worrying spike in case numbers arising from infection clusters around staff working in quarantine sites and extended family gatherings.

From the beginning of the COVID-19 pandemic, we were told two behaviours were crucial to keeping us safe: social distancing and handwashing. The coronavirus crisis has brought the mundane act of washing our hands into public discussion, and the internet is now awash (ahem) with advice, from the practical to the surreal.

Judi Dench on hand with some helpful, if mildly unsettling, advice.

If there’s one place where you would expect hand cleanliness to be beyond reproach, it’s hospitals. But this isn’t necessarily the case.

Surprisingly, hand hygiene is a vexing issue in hospitals all over the world. Repeated studies have shown it is common for hospital staff to follow hand hygiene protocols less than 50% of the time. This is as true in Australia and New Zealand-Aotearoa as it is globally. As any infection control nurse will tell you, specialist doctors are often among the worst offenders.

Who teaches hospital staff how to handwash?

Like most Western-style hospitals, all Australian hospitals have infection control experts, typically nurses, whose job is to educate, advise and monitor compliance on infection control protocols among hospital workers. This is lifesaving work, because hospitals are prime breeding grounds for deadly antibiotic-resistant bacterial strains.

The main line of defence in hospitals against these potentially fatal infections is prevention, hence the strict protocols around hand hygiene, and widespread use of gloves, robes, masks and safety googles.

Proper hospital hand hygiene involves using gloves, hand sanitiser, and frequent handwashing. Protocols dictate that gloves should be used in situations where health workers might expect to come into contact with blood, bodily fluids or other contaminants. Staff should wash or sanitise their hands before and after every patient contact, and in all situations where there has been contact with potentially contaminated material.

Infection control nurses undertake routine hand hygiene audits, and hospital staff can be disciplined if they fail to comply with the protocols.

What makes hospital staff more or less likely to comply? It turns out there are different categories of handwasher, and therefore different ways to help people remember to do it.

While working on a project looking at communication in a multidisciplinary hospital team, infection control education became one of the areas of interest. Part of the study focused on the hand hygiene habits of hospital staff in a ward with particularly high infection risks.

Based on observations, interviews and informal conversations, we discovered nursing staff tended to fall into one of three broad categories: “hero healthworkers”, “family members”, and those who were “working for the whitegoods”.

Overall, most health-care workers practised good hand hygiene most of the time. But when there was time pressure — such as during short-staffed shifts, or when multiple patients were in particular need at the same time — nearly everyone had moments of non-compliance. But, fascinatingly, there were patterns to this non-compliance. 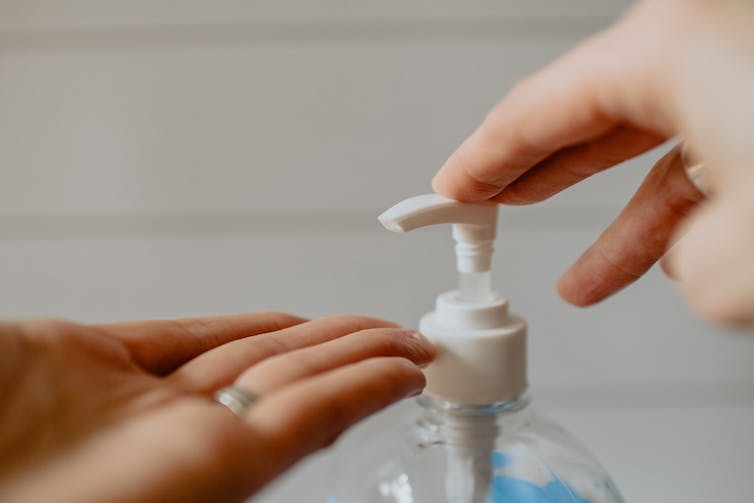 Kelly Sikkema/Unsplash, CC BY No matter how busy things were, “hero healthworkers” always practised hand hygiene before approaching a patient’s bed. But if time was short, sometimes they did not wash or sanitise their hands on leaving the patient. Nurses (and doctors) who exhibited this behaviour tended to make comments suggesting they valued patients’ health above their own. “Family members” always practised good hand hygiene when leaving a patient, but sometimes missed out on washing or sanitising before interacting with a new one. In each case, these staff members had vulnerable people in their household – mostly young children, and in a couple of cases older relatives. Interviews and informal discussions revealed deep concern around infection risks and “taking something home”. The third group was mostly meticulous in their practice when observed by a superior, but much less conscientious when only peers were around. Nurses who fitted this pattern tended to be disparaged by their colleagues as “working for the whitegoods” – treating nursing less as a professional vocation and more as “just” a job to earn money. These patterns were observed — sometimes with minor variations — in more than a dozen wards over three different hospital sites during subsequent research projects. How to improve things None of these behaviours appear to have been conscious, even among the least conscientious “whitegoods” group. Many staff recognised their own behaviour patterns when they were pointed out, but said they had not been explicitly aware of them. Identifying these characteristic behaviour patterns allowed the infection control educator to target education efforts more effectively. “Hero healthworkers” were educated on the risks to other staff by potentially transmitting infection to work surfaces and other places in the hospital by not handwashing after seeing a patient. “Family members” were reminded of the risks to patients of transmitting infections in the opposite direction. And those who only complied when being directly supervised were counselled on the need to have high standards at all times. This shift in education strategy was employed along with a number of other infection control interventions, resulting in a significant reduction in multidrug-resistant infections. Read more: How clean is your hospital room? To reduce the spread of infections, it could probably be cleaner One insight we can take from this for our day-to-day realities in the middle of COVID-19 is to be reflective about our own handwashing practices. When are we conscientious, and when do we let our standards slip? Is there a pattern in our own behaviours that we can identify, and what are the subconscious beliefs driving those practices? Can we use that knowledge to change our behaviours? The simple act of handwashing is perhaps more complex than we realise. But it is one of the things that will determine how well we fare in the current pandemic.