Revelations of alleged sexual assault, harassment and bullying in Canberra have driven a wider debate about what some female MPs have described as a “toxic workplace culture” at parliament house.

Some have now floated the idea of alcohol testing politicians at work, with one saying:

We need to have at least responsible drinking. But even ministers have said to me, ‘You know what Katie, I think even a dry environment might not be a bad thing for parliament.’

Most workplaces don’t allow their workers to be drunk at work. Most don’t even allow drinking during work hours any more. So a ban on drinking while working is good policy.

But an alcohol ban or alcohol testing at parliament house does not solve the broader problem of a sexist or misogynistic workplace culture.

Although most sexual harassment and bullying is associated with alcohol use, alcohol is not the reason people harass, bully or intimidate. The fundamental problem behind those behaviours is attitudes to women.

Read more: Drug and alcohol testing at work doesn't deter anyone, so why do it?

Alcohol causes disinhibition and can lead to poor decision making. So it is a risk factor for problems. It makes bad behaviour more likely, but it doesn’t cause those issues on its own. Attitudes that lead to sexual harassment and assault are a much more complex problem to solve.

The question of whether alcohol should be allowed at work is completely separate from whether testing is a good tool to address the problem. Testing on-site doesn’t address those deeper cultural issues.

In our court system, alcohol or other drug use is generally not considered an argument for a reduced sentence. There is an association between alcohol and other drug use and crimes but it is considered a risk factor, not a cause. 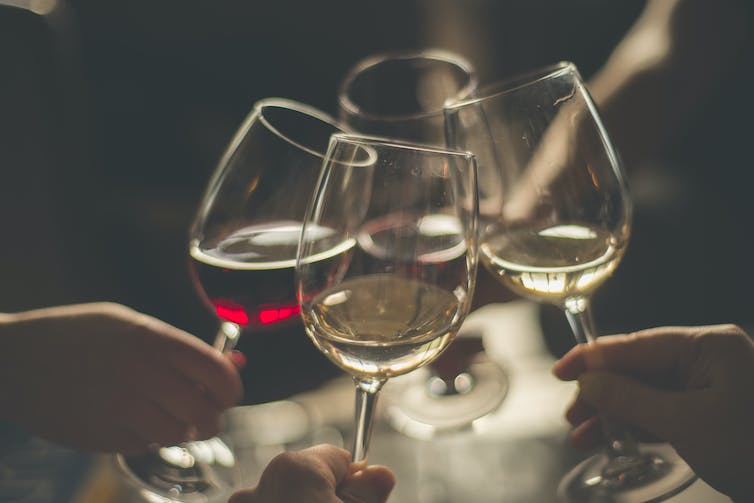 Alcohol makes bad behaviour more likely, but it doesn’t cause those issues on its own. Shutterstock

Testing is often the first thing people think of when there’s a problem where alcohol or other drugs are involved. It’s simple and it’s measurable, so it is sometimes seen as an easy solution to a complex problem. However, it’s not a very effective mechanism for addressing the problems that arise around workplace alcohol and other drug use.

As colleagues and I argued in a previous Conversation article,

To be effective, a workplace policy needs to be part of a broader healthy workplace solution that considers drug and alcohol use, mental health, fatigue and other impacts on fitness for work. Extensive manager and worker consultation is essential for effective uptake and implementation.

A clear and well-defined policy includes education and training for managers and workers, and identified referral options such as an employee assistance program.

Workplaces with effective drug and alcohol policies have happier, healthier and more productive staff and reduced absenteeism and presenteeism.

There’s a place for a discussion about alcohol use at parliament house, as in any workplace. But alcohol testing on-site is just one small part of that discussion.

Alcohol and the Canberra culture

Alcohol testing at parliament house is not likely to solve the kinds of problems some female MPs have raised, such as having to contend with sexist comments and attitudes at work.

Alcohol testing at work also doesn’t stop people from drinking outside work time, where many of these incidents occur. People will still have drinks after work with workmates and attend work functions where alcohol is served.

Many of the recent allegations relate to drinking that largely took place away from parliament house, outside work hours.

And there are plenty of men and women who get drunk with friends or workmates and they aren’t perpetrators or victims of harassment or assault.

Workplace alcohol-testing is no silver bullet

There’s a growing body of evidence looking at alcohol-related interventions among people who work in male-dominated industries.

I led a systematic review of the research, published in the Journal of Men’s Health. Men are generally heavier drinkers of alcohol than women, so are at greater risk of a range of health and social problems.

However, workplace alcohol testing policies, which were examined in a number of studies, did not have a measurable impact on overall drinking rates. 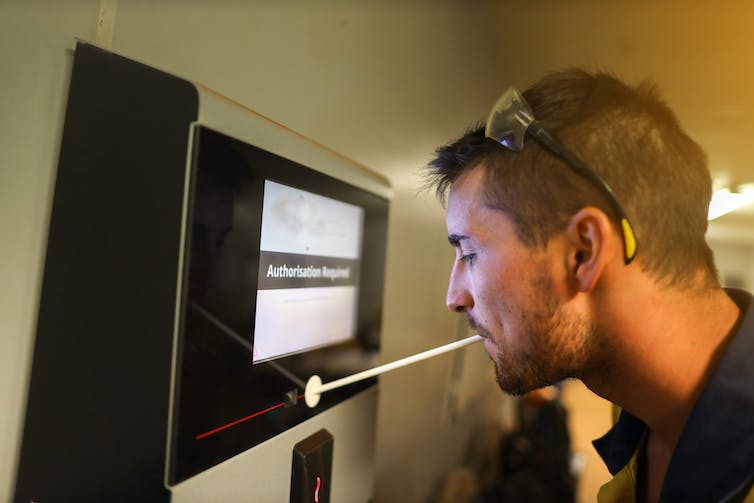 Most workplaces that have workplace alcohol and drug testing, such as mining sites, do so because people are operating heavy machinery. Shutterstock

Most workplaces that have workplace alcohol and drug testing, such as mining sites, do so because people are operating heavy machinery, vehicles or equipment. They’re often doing work where, if alcohol was involved, injury or death is a possibility.

Most workplaces that have testing in place also have a broader policy that ensures people are fit for work. This includes well developed systems for education at induction, clear guidelines about what happens if you test positive, training for staff and managers and counselling and treatment available if needed. Fit-for-work policies means looking carefully at issues such as stress, fatigue and anxiety.

In other words, even where there is workplace alcohol or drug testing, it’s woven into a much broader set of health and safety policies. On its own, it is no silver bullet.

Read more: View from The Hill: Morrison should appoint stand-alone minister for women and boot Andrew Laming to crossbench