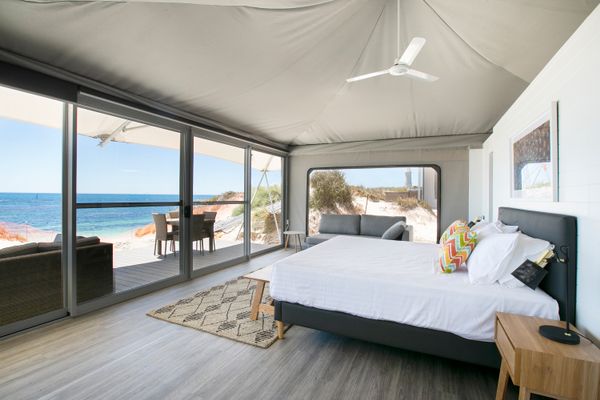 The ocean’s gentle giants have been sighted at Ningaloo Reef on Australia’s mid-north coast, heralding the start of the 2019 whale shark season. The number of visitors to World Heritage-listed Ningaloo Reef continues to increase each year, with a record breaking 32,054 people experiencing a whale shark swim in 2018. Last year saw a total of 1,845 tours take place, with a whale shark sighting success rate of 97 per cent – the highest to date. The typical WA whale shark season runs from March to August. Tours have started operating from Exmouth and Coral Bay – with consistent whale shark sightings expected from mid-March. The tours allow visitors to have a face-to-fin encounter with the friendly marine giants – which generally grow between six and 11 metres in length.

Seaplane adventures over Australia’s only horizontal waterfalls, Aboriginal cultural tours, Kimberley cruising and foodie walking tours are just some of WA’s award winning tourism experiences, recognised at the 2018 Qantas Australian Tourism Awards. Taking home a record breaking 16 awards, WA tourism businesses won eight gold, two silver and six bronze from the 25 categories. This is the biggest win for WA at the national awards, which have been operating for more than 30 years, and recognise and celebrate Australia’s best tourism businesses that have demonstrated a commitment to excellence.

The WA gold medal winners are:

In addition, Horizontal Falls Seaplane Adventures and The Beach House at Bayside in Albany were added to the tourism Hall of Fame.

For the full list of WA winners visit westernaustralia.com.

Discovery – Rottnest Island, the first new accommodation to open on Perth’s island paradise in more than 30 years, has officially opened. Nestled behind the sand dunes at Pinky Beach, the property comprises 83 fully furnished eco-tents, a resort pool and bar, and a signature Pinky’s Beach Club. All eco-tents include an ensuite bathroom, pillow-topped bed and furnished private decks, while the deluxe tents offer beachfront views and walk-in robes. The tents are linked via walkways and boardwalks to Pinky’s Beach Club, the heart of the property, offering a range of locally inspired dining options, refreshments and takeaways.

The North West town of Kununurra will welcome some of Australia’s biggest musical performers in May for the 2019 Argyle Diamonds Ord Valley Muster. Indi-pop singer-songwriter and four time ARIA award winner Amy Shark will headline the Muster’s pinnacle event – the Aviair HeliSpirit Kimberley Moon Experience on May 25, along with singer-songwriter Pete Murray and Skinnyfish Sound System – a group that brings together Australian music producers with Aboriginal artists and their communities. The event includes a ticketed Kimberley Fine Diamonds Dinner, family-friendly general admission picnic area and a new mid-tier hospitality offering, the Vintage Garden. The annual festival, which will take over Kununurra and surrounds from May 17 to 26, combines Aboriginal food, culture and dance, intimate tours in secret locations, a challenging bike ride, art exhibitions, local talent quests, a country rodeo and the Melbourne International Comedy Festival Roadshow. Early bird general admission tickets are now on sale, with travel packages including flights from Perth and self-drive from Broome available soon.

Jazz by the Bay returns to the South West

Critically acclaimed Australian-American vocalist-composer, Chris McNulty, will perform for the first time at this year’s Jazz by the Bay festival, alongside New Orleans jazz trumpeter Ashlin Parker, and returning New York-based artist Nerissa Campbell. Held over the June long weekend – from May 31 to June 3 – the popular music festival will see the South West towns of Dunsborough, Busselton and Margaret River swinging, scatting and jiving as the festival brings together local, national and international talent for an eclectic mix of free and ticketed live soul, rhythm and blues, big band, bebop and swing events at a range of great venues including wineries, pubs, theatres and galleries.

Margaret River Pro returning in May

The top 34 ranked male and top 17 ranked female surfers in the world will descend upon the Margaret River region from May 29 to June 7 to surf its world-class waves at the 2019 Margaret River Pro. The event will see thousands of spectators flock to Surfers Point in Prevelly to watch the world’s best surfers take on the famous Margaret River Main Break. In a recent deal between the World Surf League and the State Government, the Margaret River Pro will continue to retain its World Championship Tour status until at least 2021 - as the event offers some of the best surfing conditions in the world.

Opera in the Kimberley

APT has partnered with Opera Australia to present an Opera in the Kimberley series. Surrounded by breathtaking beauty, guests will join two of Australia’s finest opera singers for a once-in-a-lifetime performance in Cathedral Gorge – a natural red rock amphitheater – in the heart of the Bungle Bungle Range within World Heritage-listed Purnululu National Park. The performance is a feature on two separate tours taking place in September 2019, including a Kimberley Complete Tour (departing September 5, 6 and 7) and an El Questro, Gorges and Purnululu Tour departing on September 8.

100 things to see in the Kimberley

Coinciding with the start of the Kimberley travel season, Kununurra local and award-winning Kimberley tour guide Scotty Connell has put together the ultimate travel guide – 100 Things to See in the Kimberley. Due for release at the end of March, the guide is a culmination of a life spent exploring the Kimberley, and highlights some of Scotty’s favourite places across WA’s North West, from stunning fern-lined pools, to incredible waterfalls and wonders found nowhere else on Earth. The A5 size travel guide is now available for pre-sale through thekimberleyaustralia.com.

The Margaret River region has welcomed a new boutique craft brewery, Wild Hop Brewing Company, set in the winding Yallingup hills. The brew house and restaurant is licensed for up to 150 people and offers a family friendly setting, with a small dynamic menu that reflects the seasons. The restaurant focuses on cooking with fire, and the kitchen and brewery is supported by a growing kitchen garden to ensure fresh and sustainable produce is always available – which includes locally grown hops.

Award-winning Sandalford Wines - located in the Swan Valley wine region just a 25 minute drive from Perth CBD - has recently constructed a new event space at the estate. With capacity for 460 guests seated, the bespoke design offers superb views overlooking the vineyard. Featuring handmade items and vintage styling, the new function room is the first stage of a major expansion and redevelopment of Sandalford Wines, with plans to expand the food and beverage operations, cellar door and retail space.

Voyager Estate chef Felix Kleemann won Young Talent of the Year at the 2019 Gault & Millau Awards. Having previously worked at Vue De Monde and Attica in Melbourne, Felix started at Voyager Estate in October 2018, after writing a ‘love letter’ to work with head chef Santiago Fernandez, who shares similar principles and philosophies in the kitchen.

The World Heritage-listed Shark Bay region, located in WA’s Coral Coast – is renowned for its natural beauty, biological diversity and abundance of marine and wildlife. A two hour flight or eight hour drive from Perth, the region has added to its tourism offering with a number of new tours.

Dirk Hartog Island has launched a new ‘Walking with Whales’ tour. The four-day guided walk takes in the island’s pristine landscapes, including sandy beaches, spectacular high cliffs, rare native wildlife and humpback whale sightings as they migrate along WA’s coastline. Operating from May to September each year, the tours begin with a boat safari from Denham, and each afternoon walkers are transferred by 4WD to the island’s rustic luxury eco lodge where they will stay overnight.

Luxury air safaris in the Kimberley

Luxury tour company HeliSpirit will launch its private Luxury Air Safaris next month. Operating from April to September, a private helicopter and experienced local guide is the ultimate way to experience the rugged and untouched Kimberley landscape in WA’s North West. Guests will land on mountain pinnacles to watch the sunset, fish in wild rivers, view galleries of the oldest rock art on earth, soar through gorges and touch down to swim in secret springs and waterfalls. The new 2019 itinerary includes accommodation in unique wilderness retreats, including Kimberley Coastal Camp and El Questro Homestead. The six day, six night tours have no set departure dates and tailored itineraries can be arranged to suit each guest.

Berkeley River Lodge has made it easier for visitors travelling through the Kimberley region to experience a stay at the luxury accommodation. Australia’s most remote mainland luxury lodge experience, accessible only by air – has brought back its air transfer package departing from Kununurra. Guests can now enjoy a minimum two night all-inclusive short stay on the far north Kimberley coast direct from Kununurra in WA’s North West.

Experience stargazing at the Pinnacles with Explore Tours Perth

Explore Tours Perth has launched a new private two-day tour package, including an overnight Pinnacles experience. Guests will enjoy the iconic lunar-like Pinnacles at sunset, sand boarding at Lancelin’s sand dunes, a barbecue lobster dinner and evening stargazing. A visit to Yanchep National Park, optional extra activities and a stay at the newly revamped RAC Cervantes Holiday Park complete the overnight package. The tour is available for private groups with a minimum of eight passengers, and includes hotel pickups, meals and accommodation.

Luxury Outback Tours has launched a Margaret River, Denmark and Albany four-day experience. The tour takes guests through WA’s stunning South West and Great Southern regions, with highlights including a Busselton Jetty train ride and tour of its Underwater Observatory, and visits to Cape Leeuwin Lighthouse in Margaret River, Gloucester Tree in Pemberton, the Valley of the Giants Tree Top Walk in Walpole, Albany’s National ANZAC Centre, Mt Romance sandalwood factory, and The Kodja Place in Kojonup. The bespoke tours cater for a maximum of four people, and include all meals and deluxe accommodation.

Explore the Pilbara with Aviair

Aviair has launched new product in the Pilbara in WA’s North West, providing an easier option for visitors to explore the region’s spectacular landscape and ancient cavernous gorges. Travellers can choose between two action-packed weekend getaways, with both tours including scenic flights from Karratha, and a three-course dinner and overnight stay in ensuite eco tents at Karijini Eco Retreat. Two adventure tours with West Oz Active are available – one being a Class 6 Canyoning Adventure, and the other a Class 5 Guided Canyon Hike. Both options take in the very best sites Karijini National Park has to offer, and will operate between May and August.

The Flying Sandgroper Adventure Tours and Sail Ningaloo have launched a unique Ningaloo and Karijini package, combining the two popular destinations in the one holiday. Experience the best snorkelling and scuba diving at World Heritage-listed Ningaloo Reef before travelling inland to discover the gorges and waterholes of Karijini National Park. The 10-night package starts from $4,015 per person and includes meals, airport transfers, a five night ‘Ningaloo Escape’ tour on board Sail Ningaloo’s Shore Thing vessel, and The Flying Sandgroper ‘Ningaloo Karijini Jump’ tour.

Experience the Swan Valley wine region by air and road

Rotorvation Helicopters is offering Ultimate Swan Valley Wine Tours where guests get to visit three iconic Swan Valley wineries, with lunch and tastings included. The tours depart from either Hillarys Boat Harbour or Jandakot, with road transfers included. The exclusive private return flight takes in spectacular views of Perth city and the coastline, before arriving at the Swan Valley. The tour costs $1190 per person and includes morning tea at The Cheese Barrel, wine tastings at Olive Farm, a three course lunch at Sandalford Wines, followed by further wine tastings at Mandoon Estate.