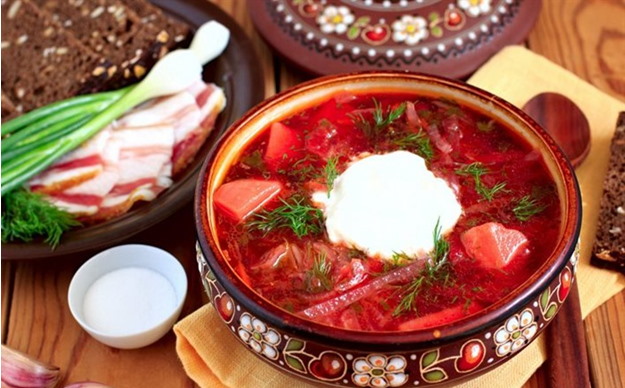 All nations have unique cuisines with local ingredients, favorite snacks, comfort foods, and desserts that delight kids and adults alike. Think Italia and imagine pasta and pizza (New Yorkers may debate the Italian rights to pizza, though). Think China and get steamed buns, pork and shrimp meatballs, and stir fry. France? Cheese, baguette, and pâtés washed down by fine French wines!

But when you hear borshch, what country do you imagine? Ukraine, definitely. So let us explore what this dish is and why this staple of Ukrainian cuisine has conquered the world.

Borshch: Is It A Soup Or What?

Usually, the key reason for a dish to become a staple on the table is the practicality of making and availability of ingredients.

The main component of borshch is red beet, fresh and fermented, and brine that is produced during fermentation. Beet crops (except potatoes) were long known on the territories of modern Ukraine, and their preservation was a simple matter – load them into a root cellar or pickle them in barrels. Other components were also easily found and grown, including beans, onions, carrots, cabbage, and greens. Potato and tomatoes will join the party later when they arrive from Latin America.

Now the classic recipe: fill a big clay pot with water, chop and load all ingredients, add the brine to the taste, and let it sit in the heated oven for as long as possible. Additional flavor and nutritional value are added by vegetable or animal oils mixed with flour, festive kinds of borshch were usually made with chicken or pork. Leave it to steam in the heated oven overnight or put the pot into the stove when you go out to work in the yard, and return to sit down to a ready dish. Serve with fresh bread and sour cream.

Relatively little preparation, loads of calories, rich savory taste, broth plus veggies, proteins, and carbs – the dish is a gift for busy people who need to eat well but cannot spend a whole day in the kitchen. Real Ukrainian borshch is a soup and a stew in one plate, eat it and get that feeling of warmth and a filled tummy for quite a long time.

Unique Features Of The Dish

Borshch is recognizable due to several factors:

- It has beets and beet brine as its basis, so it is usually scarlet-red.

- It has the special sweet and sour taste, the Ukrainian umami that makes you want one more helping. It is neither bland nor too spicy or acidic, it is just right for the majority of human palates.

- It is really nourishing and healthy: vegetables, carbs, proteins, and a variety of sides to be served with it meet the strictest rules of healthy eating.

- It is thick due to plenty of vegetables, no cereals or other fillers are added to the mix.

Many Faces Of Borshch

Borshch is usually depicted as ruby-red due to beets as the key component. But there are many kinds of borshch that are typical of specific territories. They reflect local components and cultural practices: - Borshch in Poltava (central Ukraine) is rich, full of vegetables and meat, spices and flavor. Have it and you feel like you had a full course meal.

- Western Ukraine has its own borshch, which looks like a beet stock with a distinctive sour taste and goes with vushka – small filled dumplings.

- White borshch does not have beets in its recipe and relies on lots of cabbage, flour mixed with lard, and sour cream for thickness instead. But the rest of the components and their diversity still make this dish a borshch.

- You can have hot borshch (in winter) or cold borshch (made in summer with fish or new vegetables).

The common thing for all mentioned dishes is that they all fall under the definition of borshch. Make them after trusted recipes, try them and you will understand why Ukrainian borshch is so loved and special.