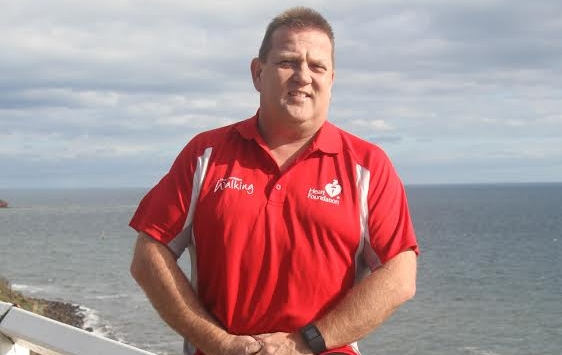 When married father-of-two Craig Riley was diagnosed with type-2 diabetes, this student of karate kick-started his discipline.

With FitBit engaged, music pumping and social media postings, Craig took the first steps towards a healthier lifestyle through walking and watching his diet. After three months walking, Craig had dropped 17kgs and amazingly, no sign of type -2 diabetes.

“It was so exciting to get those blood results, to completely reverse the type-2 diabetes diagnosis and no longer require medication,” Craig said.

“It was such a win-win situation, even my doctor couldn’t believe it. I had to be retested just to make sure.”

Living in Seaford, Victoria, Craig has scenic walks and challenging hills nearby to maintain his motivation. Through his FitBit, Craig has mapped out 4km, 6km and 10km courses depending how he is feeling.

Craig has joined Heart Foundation Walking as a `Virtual Walker’, with work commitments making consistent appearances with a group difficult. However, Craig has found a social media community that motivates everyone.

“I started posting every time I was doing a walk on social media and found people commenting publicly and private messaging me. The feedback was really spurring me on and now, I have friends in every state walking each day and challenging each other, holding each other accountable,” Craig said.

“I have found the engagement through social media has opened pathways for chatting and everyone knows reaching your goals isn’t a quick process, but is fun.”

Craig found the engagement and conversations from his posts in many places, including at karate events where he watches his son compete and represent Australia.

“I have people ask me how the walking is going and I must admit, it wasn’t a good feeling being the father of an elite athlete at elite events and not addressing my own health,” Craig said.

“I still hope to lose another 18kgs over the next four to six months.”

Whether part of cardiac rehabilitation, tackling high blood pressure, addressing type-2 diabetes or keen to shed some kilograms, you can find a Heart Foundation Walking Group at http://walking.heartfoundation.org.au or like Craig, register as a Virtual Walker.

Heart Foundation Walking is funded nationally by Fitbit and the Queensland Government.