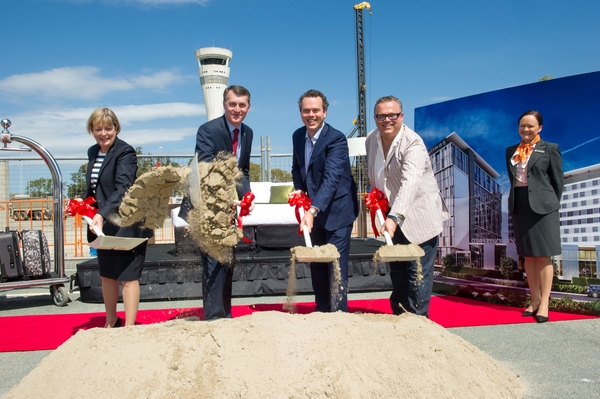 The development is expected to create 1,000 jobs during the construction phase, and the two hotels will employ up to 350 people when open in September 2017.

Simon McGrath, Chief Operating Officer for AccorHotels Pacific, said “It is exciting to see this significant development for Brisbane Airport break ground. We are proud to strengthen our partnership with the Flynn Group given our success with Novotel Brisbane Airport since 2009, and we congratulate the Flynn's on their momentum in this visionary project.

“The Pullman and ibis hotels will strengthen Brisbane's airport offering and play a crucial role in winning major conferences and events for the city,” Mr McGrath said.

Scott Flynn Managing Director of Scott Flynn Properties said he and joint owner and developer Anthony Flynn of Flynn Property Group, were delighted to start construction and once again be partnering with AccorHotels in the first purpose-built branded 5-star hotel constructed in Brisbane in over a decade.

“The addition of the Pullman and ibis hotels to our existing Novotel Hotel at Skygate will also mean the full spectrum of full-service branded hotel options will soon be available at Brisbane Airport,” Mr Flynn said.

The Pullman Brisbane Airport will include 130 rooms including two Presidential Suites, 10 Junior Suites and 45 Executive Rooms.  A freeform leisure pool with a 20 metre lap pool, poolside daybeds and pergolas will be available for guests relaxing in transit or waiting for a flight.  The hotel will feature 24-hour room service for the convenience of its transit and regular guests, plus a lobby lounge bar catering for up to 60 guests, restaurant with seating for up to 152 patrons, and private dining room for a maximum of 12 people for more intimate events.  A top floor executive club lounge and bar, business centre and executive gym will be available in addition to a poolside dining and entertainment area to maximise the dramatic view beneath the flight path.

The ibis Brisbane Airport will offer 243 rooms including 99 Superior rooms. An alfresco indoor/outdoor restaurant catering to 160 diners is being constructed, in addition to a ground floor indoor/outdoor bar for 100 patrons, a cafe, bar and takeaway facility, and roof top bar and lounge catering for up to 150 people with spectacular views over the airport across to Moreton Bay, suburban Brisbane and the CBD.

The Brisbane Airport Conference Centre (the hotels' joint central conference, meeting and event space covering some 1,735m2) caters for up to 600 people at any one time and includes a 300 seat pillar-less Ballroom, eight medium to large conference rooms and four executive boardrooms. Other facilities include an open air terrace breakout area, a business centre and cloakroom.

AccorHotels is a Group united by a shared passion for hospitality and driven by a shared promise to make everyone Feel Welcome.

Over 180,000 women and men in 3,700 AccorHotels establishments look after thousands of guests every day in 92 countries.

AccorHotels is the world's leading hotel operator and offers its customers, partners and employees:

- its dual expertise as a hotel operator and franchisor (HotelServices) and a hotel owner and investor (HotelInvest);

- almost half a century of commitment to corporate citizenship and solidarity with the PLANET 21 program.

Accor SA shares are listed on the Euronext Paris exchange (ISIN code: FR0000120404) and traded in the USA on the OTC marketplace (Code: ACRFY)

ABOUT THE OWNERS / DEVELOPERS

Anthony and Scott Flynn, of Flynn Property Group and Scott Flynn Properties respectively, are the owners and developers of Brisbane Airport's biggest third party development.  In addition to this $150 million hotels and conference centre development, the two Brisbane brothers have delivered contemporary hotel and residential apartment developments in Brisbane in excess of $300 million, including the Novotel Brisbane Airport at Skygate. More information about these developments can be found at www.flynnpropertygroup.com.au and www.scottflynn.com.au.

Another article published in collaboration with MultiViw